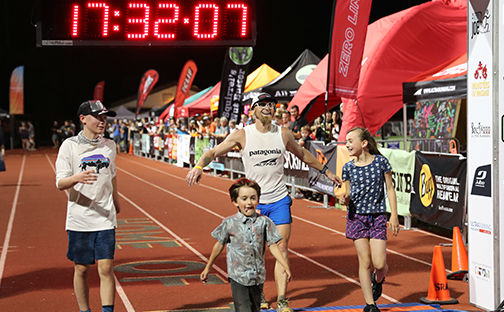 (Logan, UT – June 26, 2017) — Altra Footwear was well represented at the 2017 Western States 100-Mile Endurance Run as the Presenting Sponsor, and 4 male and 2 female athletes finishing in the top 10 for their gender. Overall, 12 Altra athletes ran the legendary course starting at Squaw Valley, finishing in Auburn, CA.

Jeff Browning, with a time of 17:32:17, ran a smart, patient race and relied on his experience from more than two dozen 100-mile races to move up from 17th at the Devil’s Thumb checkpoint (mile 47) to finishing in fourth place.

Browning’s post-race tweet sums up the tough day for him and the other racers:

“#WS100 always throws it at you…this year we faced snow, mud, and heat. And with perseverance, finally the joy of crossing the finish line with my 3 kids for M4 for my 27th hundred mile finish. Back again in 2018. Giddyup and #seeyouinsquaw.”

Ian Sharman finished seventh with a time of 17:42:07, and continued his streak, becoming the first person ever to earn eight consecutive top 10 finishes overall at Western States.

Also finishing strong were Altra’s female athletes. Altra’s top finisher was Nicole Kalogeropoulos in the sixth woman and 25th overall with a time of 21:00:52. Meghan Laws (formerly Arbogast) placed 9th woman and was the second 50+-year-old age group finisher at 21:57:09 in her 11th time finishing in the top ten females. Dana Anderson got 20th female at her first Western States and only second 100-mile race after her Javelina Jundred win last fall, while Maggie Guterl was right behind her at 25th female.

Other notable finishes from #TeamAltra are Jeff Ball — a Golden Ticket winner from Bandera 100k — who placed 50th, while Travis McWhorter placed 230th at his first Western States. Two of Altra’s international athletes, Katsutoshi Saijo from Japan and Thomas Lorblanchet from France, completed the course. Saijo finished in 51st place with Lorblanchet right behind him at 55th place.

As Presenting Sponsor of Western States, Altra created a limited edition Western States trail gaiter for runners to commemorate their experience. These gaiters are also available for fans to represent the famed 100-mile trail race. This gaiter is made from a breathable, abrasion resistant material that keeps out trail debris like sand, dirt, and leaves. You can pair these gaiters with any trail shoe but they go perfectly with Altra’s GaiterTrap™ equipped shoes. The Altra Western States trail gaiter is currently sold out due to high demand but will return later this summer for $19.99 on www.AltraRunning.com.

The Western States 100-Mile Endurance Run is the world’s oldest 100-mile trail race. The race starts in Squaw Valley, California and runs 100.2 miles ending in Auburn, California. Racers climb more than 18,000 feet and descend nearly 23,000 feet to reach the finish, along with crossing ice-cold rivers and facing both sunny and chilly temperatures. Western States started in 1974 and has come to represent one of the ultimate endurance tests in the world.

About Altra
While working at a running store, Altra Founder Golden Harper was frustrated that modern running shoe technology caused poor running form and had not decreased running injuries. His passion was to create a shoe that followed the science produced Altra’s FootShapeTM toe box and Zero DropTM platform. Since its founding in 2011, Harper and co-founder Brian Beckstead have grown Altra from one to 25 shoe styles, winning multiple Editor’s Choice awards and distribution in more than 60 countries. Join the conversation @AltraRunning and #ZeroLimits on Twitter, Instagram, and Facebook.