A photo documentary into the darker side of ultra running.

I saw him coming for almost an hour. The way the trail lay I could see across the desert to the side of the unseen rise. The trail disappeared into the high brush and eventually Antonio came into sight; still walking slowly, almost a rhythm to it, a shuffle/rock forward and repeat. When he saw me and the others, he stopped. “Mile?”, he asked. “92”, I said. He nodded and said, “it’s been like this since (Mile) 45”. What do you say to that? He turned down the trail and headed off. He finished several hours later.

Tony (below) has just finished his first 100 miler. Not an easy one, as if there are any easy 100’s. You can see the morning sunlight of the ”next day” on his face. And the 1000 yard stare. More than relief there are questions in his eyes, in the set of his jaw. Am I insane? What was I thinking? How do I feel? Am I really done? Later there will be hugs and celebration. In this moment there is the stillness after the “fight”, the last silence of the effort, the slow unwinding of the emotional clutch as his running engine that carried him this one hundred miles in the Idaho mountains; his heart and maybe his soul come to rest, only to know, maybe too soon, that he will go down this road again, in some other place, not tomorrow or the day after but soon enough and that he will once again be looking for the silence, the peace, the unity, the connection. 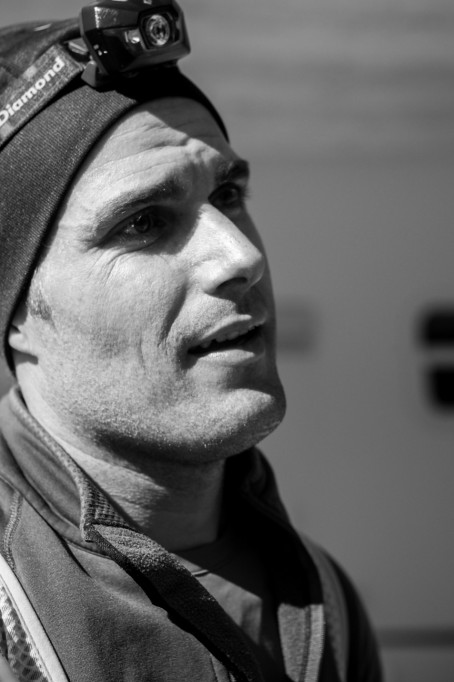 The 2012 Pine to Palm 100 was a race “between the Jenns”. Jenn Shelton led early on until she had stomach issues at mile 33, likely due to the increasing temperatures. She watched Jenn Benna cruise by, assuming the race was over. Yet, when the sun went down Shelton felt a surge of energy and began to close the gap. And then Benna took a wrong turn around mile 65 and Shelton came into the aid station at mile 75 surprised to find herself in the lead. The two would run within minutes of each other for the next 11 miles, then Shelton pushed a surge for the last 15 miles to finish more than an hour ahead of Benna. They paid a massive price for their efforts and you can see it, following their finish. 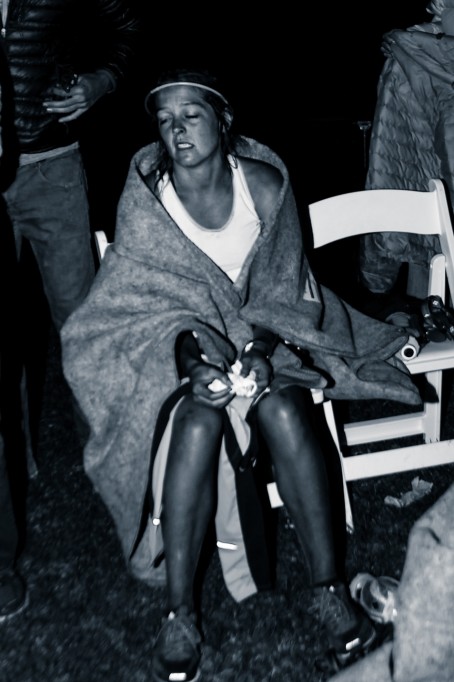 Jenn Shelton, the winner of Pine2Palm. 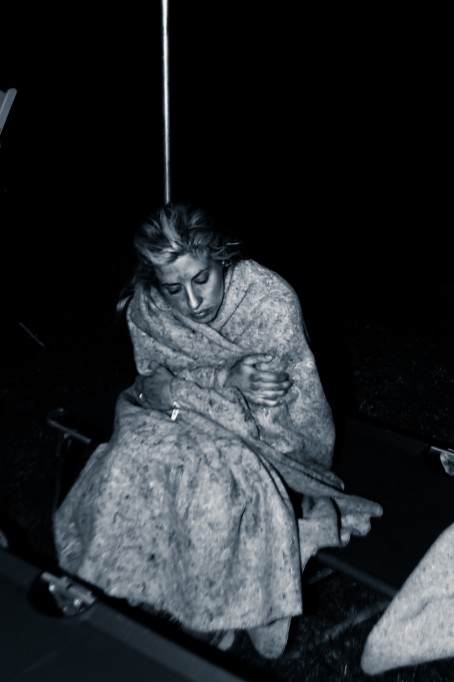 Jenn Benna, who led the race for 65 miles and got lost, after coming in second. 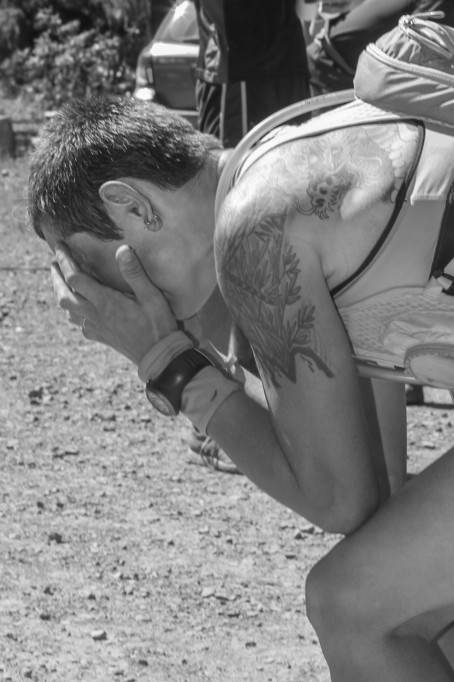 “A hundred miles is just plain hard.” says Erik Skaggs, a well known elite ultra runner. What the hell, the picture is in total agreement. 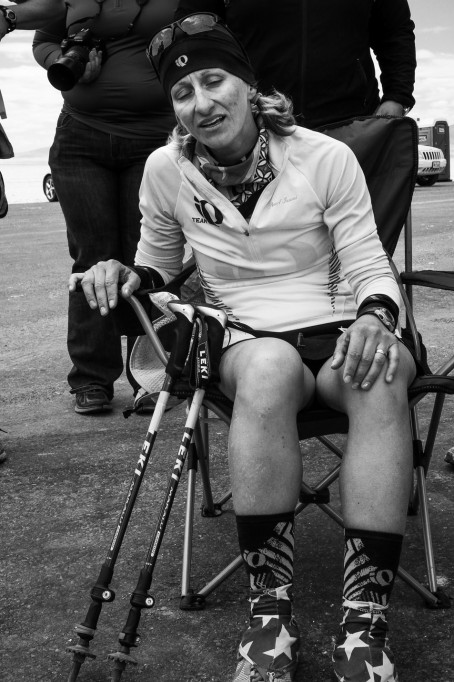 Emily finished her third 100 mile event, The Salt Flats 100 Mile Endurance Run, in just under thirty hours. On her way to the finish line she was moving well, full of fire and determination. In the time it took to get from the finish line to the chair, maybe 30 seconds or minute, the pure physical realization of the effort made itself known. 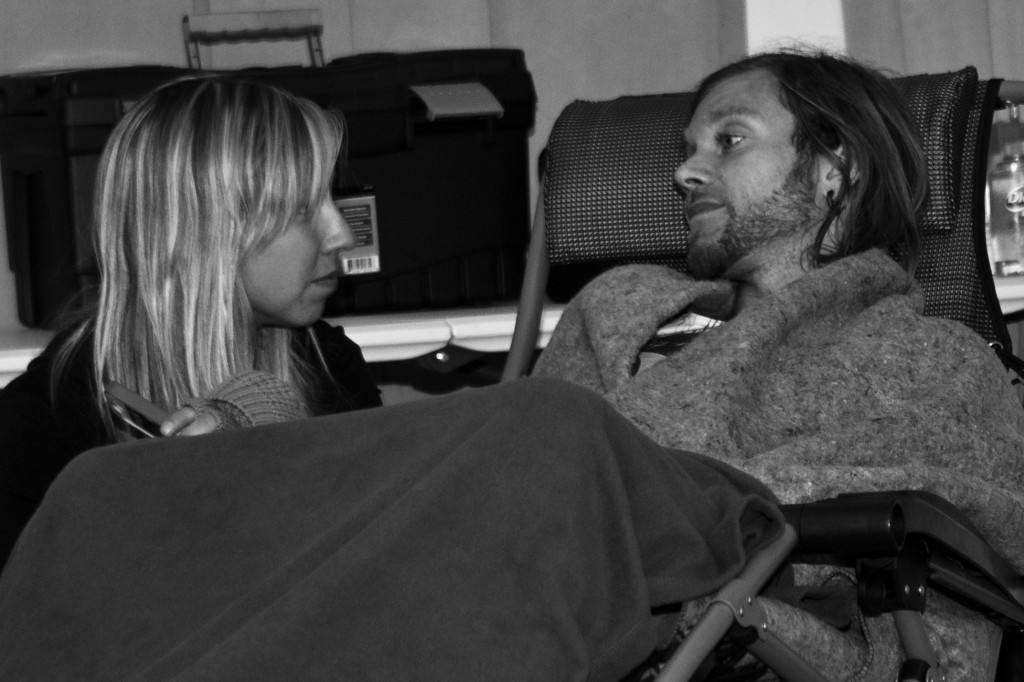 Timothy Olson and his wife and partner, Krista, recover from Tim’s record setting Pine2Palm 100 in 2011. He broke the record by more than an hour. There are many things in this photograph, a life shared, an effort made, a time to heal, and something almost ineffable, commitment, love, family and hope in the focus of the one on the other. For Tim and Krista, it would seem, his 100 miles is a shared experience that will build their life together.

In the end, this seems to me to be one of the essential building blocks of the human community, evoking the full tribe in search of food and shelter, each to play their part that the whole survives. And more than survival that it will prosper and create a better place for those who follow. Another way of saying all that is to remember that we humans come from the hunters who ran down their food on the plains of the Serengetti, in the mountain fastness of the Urals and the vastness of America. This hundred mile thing is about more than the miles in every way imaginable, but at the end of the day, it is still one hundred miles and it is just plain hard.

To see more of Michael’ work, visit his website at http://longrunpictures.com/

» inspiration, Musings » At The End Of The Day