The last running of the Bartlett Park Ultras happened seven years after Mike Samuelson wanted to direct his own race.  Since Memphis didn’t have many ultras, he chose to create a race at his favorite place to run in Memphis, Nesbit Park.

Instead of having only one distance, he wanted to give people an opportunity to run what they wanted. He said the mileage was suited for the Dizzy Fifties style race.  In similar fashion, the race uses loops to complete the three distances.  Everyone does the loops for the 50K and then it is up to the runner to choose their fate.

Registration for the race was $25 in advance and $40 a few weeks before race day.  For what Mike provides in return, that’s more than a bargain.  Proceeds from the race benefit Memphis non-profits and trails.

I can attest to how appreciative I am of the bailout options. Being able to decide mid-race which of the three distances (50K, 40-mi, or 50-mi.) to do is very comforting. Others view it as a crutch.  Either way, a choice is nice to have. 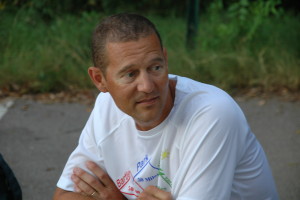 From the beginning, this race has been part of the Arkansas Ultra Running Association Ultra Trail Series. It was the only race in the series outside of Arkansas last year.  In the current series the Swampstomper 50K, a race once directed by Mike, adds another race outside of the state.

The final race drew the most entrants and finishers.  It attracted a diverse group of runners.  There were some idiots, people that wanted to run it fast, maniacs, and those trying to breakaway from the pack.

For those preparing for the Arkansas Traveller 100 (AT100), it was the final long run before the taper.  Signs of fall showed as the weather cooperated. Cool temperatures are not common for this time of year. Many PRs were a direct result.

A caveat of the race is being able to run past your vehicle after each loop. Who needs a drop bag when you have your vehicle?  Having access to your car can also be a bad thing.  If you’re not having a good race, you can easily be tempted to leave after a bad loop.

One of the first things to notice about the course is the abundance of roots.  At first, that’s not a big deal, but later in the race when you’re tired and not picking your feet up as high, roots will trip you up quickly.

The course elevation doesn’t appear to be too bad.  After two or three loops, the slightest inclines can be challenging.  If you happen to continue past 50K, the hills get steeper and you begin to wonder why you didn’t stop when you had the chance. 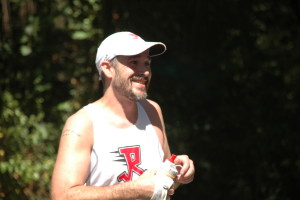 Shannon is all smiles after his 50-mile win.

Although this was the last year for the race, it won’t be the last time a race is held at the park.  Mike has decided to chase his dream and start his own race management and timing company, Altis Endurance.  Next year be on the look out for many distances held at Nesbit Park or as many call it Stanky Creek.

One Response to Bartlett Park Ultras – Trail Running in Tennessee