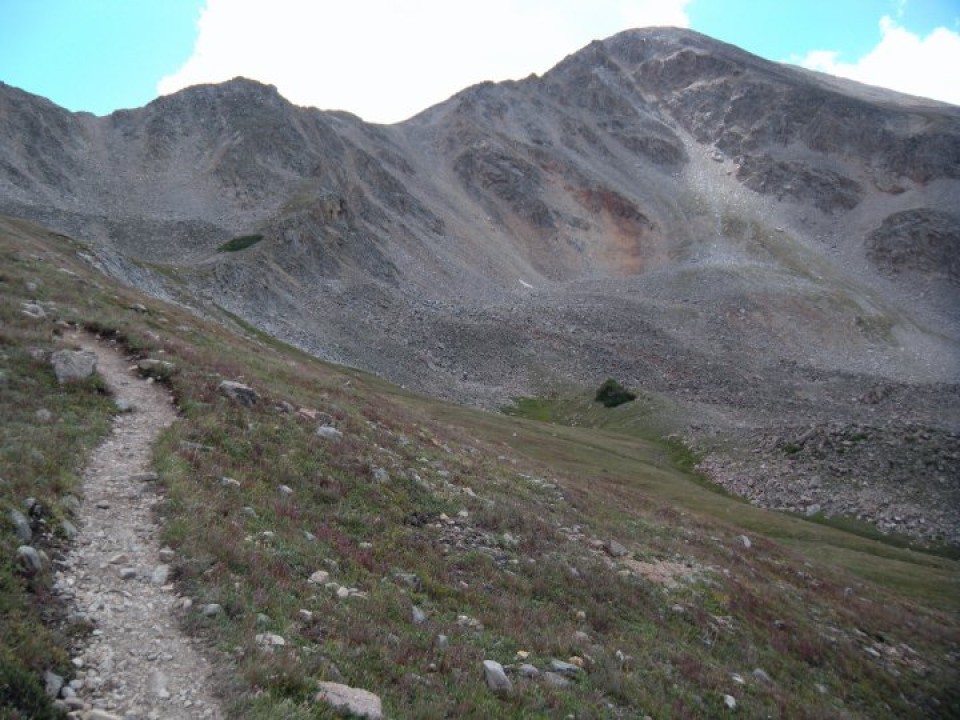 It is not a race, but one of the most definitive displays of personal perseverance and endurance. The goal? To climb as many 14ers as one can, travelling on foot, in 60 hours. No course markings, no water or food stashes in the woods. It is human against 60 hours, and 14 mountains that rise above 14,000’ in elevation.

According to Matt Mahoney’s Website, “Nolan’s 14 is a run over the 14 summits over 14,000 ft. in Colorado’s Sawatch Range, from Mt. Massive to Mt. Shavano in either direction. You can choose your own route between summits, but the most practical routes have been estimated to be 88 to 106 miles with 44,000 ft. of climb. Cutoff is 60 hours to the last summit.”
http://mattmahoney.net/nolans14/

Since 1999, only seven people had completed the journey to all 14 peaks in 60 hours. On September 3rd, Eric Lee of Boulder, CO became number eight. This is an event that tends to live under the radar in ultra and trail running circles. It is usually only discussed in passing, and with a true sense of disbelief. Most times, only mentioned in discussions including the Barkley Marathons. It is legendary in peak-bagging and mountaineering circles, where many deem it impossible or deny it even exists. 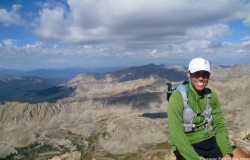 But then there is Eric Lee

Eric is a Lab Manager at the University of Colorado Health Sciences Center. He works at the University of Colorado Denver and lives and trains in Boulder. A peak-bagger turned Ultra-runner, Eric is more than at home in the Mountains. I am humbled and most appreciative that Eric took time out of his busy schedule to talk a little bit about his recent Nolan’s 14 success. I, of course, could have asked quite a few follow up questions through-out; but statistics show internet readers having a short attention span.

Sherpa John: Eric, Thank so much for taking the time to talk to us about your Nolan’s 14 Adventure.
Eric Lee: I’m honored that others would take an interest in my journey along Nolans 14.

SJ: So tell us a little about your decision to take on Nolan’s 14. This has been a work in progress being that you first attempted the 14 in 2008.
EL: When I first moved to Colorado in 2006 I was more peak bagger than ultrarunner, having only run one ultramarathon. As I ventured more and more into ultra distances, I happened to learn of Nolans 14. The fantastical notion of climbing the 14 Sawatch 14ers in one push, was both fantastical and intriguing.  It would combine my love of the mountains with the new world of ultra distance running that I was slowly being sucked into. The first three times I set out along the Nolans course (2008, 2009, 2011) I did not intend to finish all 14, but each time I gained some valuable knowledge about the route and myself.

SJ: So what would you say was the toughest aspect of the planning process for this kind of adventure?
EL: For me the toughest part of the planning was trying to workout a training schedule around working 50 hours-a-week and commuting back and forth from Boulder to UC Denver. To put in 70-80miles and 20-30k of elevation a week takes up a lot of time, and trying to schedule it around life took complete dedication to the goal.

SJ: It looked as though you had an amazing crew out there for the weekend, what challenges did they face and how did they cope through all they had thrown at them through the weekend?
EL: I was very fortunate to be surrounded by so many amazing people during my 2012 Nolans attempt. Without them the journey, and completion, would not have been possible. The hardest part for them, besides the sleep deprivation, was trying to coordinate and time when I was going to be at crew points. Whenever you’re climbing in the mountains for that long it can become very hard to guestimate times. I had pre-determined splits, but those can drastically change during the course of a 60 hours run. Through Mt Yale (#10) I was within 1h of my ETA for all trailheads, then it all went to hell on Mt Princeton.

SJ: Everyone always asks.. “How do you train for something like that?”
EL: It comes down to two simple principles, time on feet and efficiency of elevation gain. Where most people set weekly mileage goals, I set weekly elevation gain goals; starting with 10k ft/wk in January and capping out at 25k ft/wk in July. I am very fortunate to live in Boulder, where steep hills are right out our backdoor, so getting in 6-8miles with more than 3000ft of gain was the norm for a weekday run. I’ve always enjoyed the steep and technical, so it wasn’t too much of a departure from my usual training, just more focused. Then when the mountains melted out early in May, I spent every single weekend above 10,000ft running, hiking, and climbing big mountains. By the time all the training was done I’d covered 1,800miles and 500,000ft of elevation gain.

SJ: Now you did most of this adventure (if not all of it) with a pack on. What did you carry in your pack throughout and how much would you estimate that it weighed? And did you take this into account during your training?
EL: I carried my ultimate direction pack for the entire trek, and definitely factored this into my training. For many of my mountain runs, up high and local, I carried the same gear I was planning to take with me on Nolans 14. Not only to get used to the gear, but to get my legs used to carrying a few extra pounds. Being a mountaineer/peak bagger my philosophy in the mountains is to always be self-sufficient, meaning I am capable of spending a night out if something goes horribly wrong. I don’t agree with the current ethic some of the other ultrarunners turned mt runners utilize of carrying nothing, and being prepared for nothing, but to each his own. In my pack I carried 2L of water, 600-2000 kcal of food, a rain shell, light gloves, arm warmers, my little camera, my SPOT locator, a space blanket, small pocket knife, whistle, a few first aid items, an emergency light, and a trash bag. At most my pack weighed 10-12lb.

SJ: Tell us about your darkest moment on the adventure. When were you most down and out? What was going on in your head and how did you get through it?
EL: By far the hardest and darkest moment for me was the second night on Mt Princeton. While I was doing well fatigue wise, my lungs were severely constricted slowing me to a 1mi/h stumble above treeline as a cold wind numbed my extremities. I would stagger forward a few steps, using my hands for balance, then have to rest. I felt completely decrepit and at that point was not sure if I’d be able to finish, despite how strong I’d moved for the first 10 peaks. I would constantly have to remind myself to take the route one section at a time, and having my friend Pete along for that leg was definitely a huge help mentally. In the end, as I descended the back side of Princeton into Grouse Gulch I began to feel better and stronger, which raised my spirits.

SJ: Was it ever your goal to break the FKT for this adventure?
EL: Yes, my initial goal/hope was to both finish and to set the FKT. While I knew it was something I was physically capable of, I knew that it would also take a perfect run for me to do so.

SJ: You said in one of your reports, “legs can give out on you, your lungs can give out, route finding issues, sleep deprivation, altitude sickness, physical bonks, bad weather, missed crew resupplies.” Of this list, what went well and what was truly challenging during the 57 hours you were out there?
EL: For me all of the items listed went fairly smoothly. I had two times where I had to wait for crew for maybe 5-10min, but the weather, my legs, the lack of sleep, and route finding were all a non-issue for the most part. What really slowed me, from Mt Princeton on, was some altitude induced lung inflammation/constriction. Basically, above 12,500ft, my lungs capacity would shrink up and I could only get in very shallow inhales, thus cutting my oxygen consumption and causing my pace to suffer.

SJ: You’ve been running Ultra’s since 2006 and in that time have amassed an impressive resume. What’s next for you?
EL: I just signed myself up for the inaugural IMTUF100 in Idaho on Oct 6th, 2012 (Update: Eric finished in 3rd!). For next year I’m looking forward to hopefully running both the Hardrock 100 and the Ultra Tour du Monte Blanc, two races that I’ve had very poor luck with in the lotteries. The idea of following Homie’s lead and making an attempt at CaveDog’s Colorado 14er record has also definitely crossed my mind, buy that is at least a few years away.

SJ: Do you have any desire to attempt the Barkley after your Nolan’s Adventure? You are now a part of a list of storied Barkley Veterans who have tried and succeeded on Nolans after all.
EL: The thought has definitely crossed my mind, and the Barkley is something that has intrigued me for years. I even got an offer from a friend in Boulder that he’d pay my entry fee (all $1.60) if I signed up next year. One of these years I will toe the line in Frozen Head and give it a go, though not sure about next year.

SJ: What advice would you give anyone who was thinking about taking on a journey run of this magnitude of other?
EL: Do your homework and be prepared. So many people want to rush into big events now-a-days, whether it be 100 milers or long mountain runs. What I’d say is build up to it. For me, the journey of getting to the point of actually being able to complete Nolans 14, was just as enjoyable and rewarding as the event itself. Training is not work, it should be play.

SJ: Eric, Thanks so much for your time.
EL: Thank you John, it was my pleasure to share my insight and thoughts on Nolans 14, and hopefully inspire someone else to take on this fantastic route.