Well, this obviously isn’t the race report that I was hoping to write, but alas, things happen. On April 28th, I quit my first race. Ever. In (off and on) 15 years of running, I’ve never quit a race. Mind you, for most of my time running, I’ve run 5ks, only getting into major distances in the last 6 years. Still, it really broke my heart to join the DNF club, but I’m not the first, last, or most awesome one to join that club.

My training for this race felt good, but the more I look back, of course, I question it. I was running more miles per week than my last training cycle, but I never ran more than 31 miles at one time. In my last training, I did a 12 hour race, running 60 miles in that time. That’s incredible endurance training for a 100 miler. This year, I focused on more weekly miles, but never ran more than 7 hours at a time before this 100. I think this was a detriment to my training, but sometimes it’s hard to run more when you feel like you are running during all of your free time.

I also don’t think I mentally prepared for this race as I should have. In my last 100 miler attempt, I mentally prepared for the pain & the exhaustion and told myself that no matter what, even if I had to crawl, I would cross the finish line. This time around, I felt almost too relaxed. While I was nervous the weeks leading up to it, I kept trying to relax and brush it off, so I didn’t end up mentally preparing. I was too nonchalant and it really bit me in the rear. 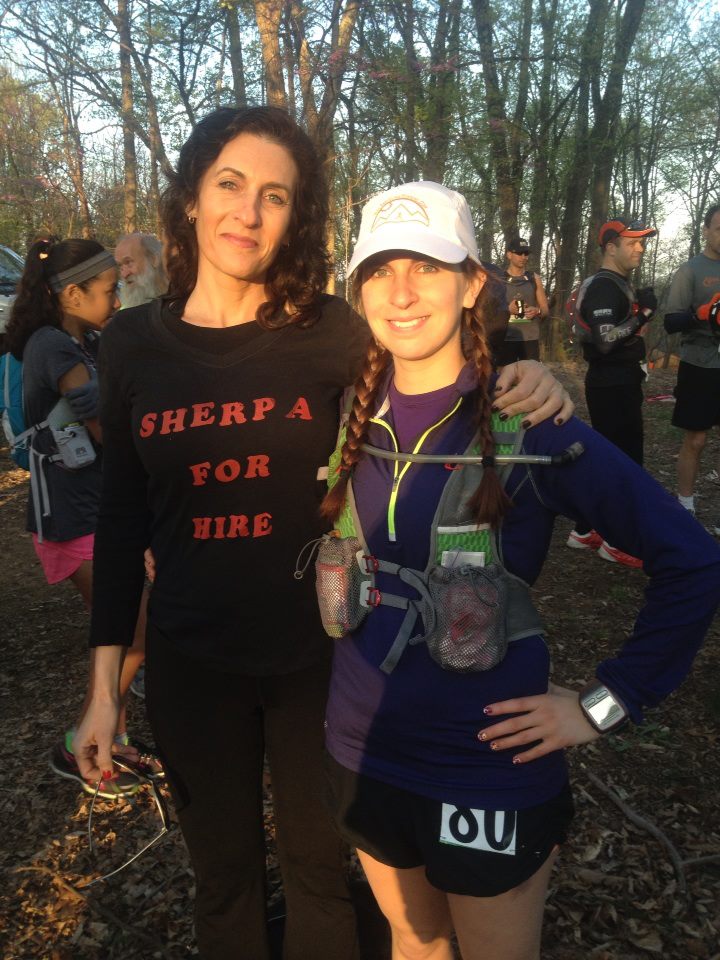 My mom and me before the start

On April 27th, my mom drove me to Knoxville, MD, the start location of the race. The course was (supposed to be) a 50.4 mile loop along the C&O Canal that, minus the beginning and end of the loop, was pancake flat with nearly no turns. Living in Philly, I felt I was well-suited for a flat course and it would allow for a (hopefully) faster 100 than my last. I knew flatness is deceivingly hard as you use the same muscles over and over in the same fashion, but I hoped I could handle it.

At 7 am, after words and a short prayer from the race director, we started the race. We went down the only hill of the course, which was actually quite steep and slippery. My friend, Jon, was racing this course with his running friend, Justus, so the three of us stuck together. Jon, sadly, was sick, so his breathing was really off from the beginning. Justus had a 10/2 run/walk system and I enjoyed being with them for the company and the reminder to walk. I did notice that they were running a bit faster than I planned, but the idea of running alone wasn’t fun sounding, so I stuck with them. 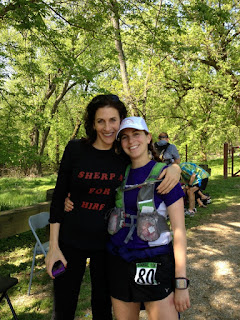 The course was really pretty, but I could tell I was going to be bored pretty easily. Also, by the time we got to the first aid station, we knew the course would be long. In the end, the race was 105 miles instead of 101.4, which was really frustrating later on in the race.

I saw my mom at the ~20 mile aid station, which was so great. I ate some food, applied sunscreen and bug spray (so many gnats!), and headed out to the (what actually was) 31 mile mark, which was a turnaround. I almost ran out of water before I got there and the aid station between 20 and 31 wasn’t set up by the time we passed it. It was getting warm and I just wasn’t in happy place.

After finally hitting mile ~31, refueling and getting some water in my hydration pack, we turned around and headed back from the ~40 mile aid station (same as 20). After what felt like forever, I got there to find my mom, boyfriend, and cousin there. My feet were getting too swollen for the shoes I was wearing, so I switched into my compression socks, trail shoes, got some more food in me, then hit the trail. 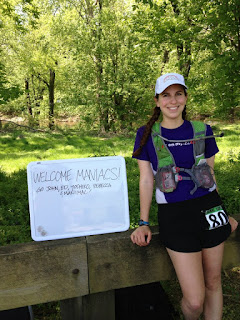 Jon was really feeling tired and rough, but I felt a surge of energy after seeing my family and BF. I kept pushing while Justus and Jon took a walk break at one point and I ended up doing the last 11 or so miles of the loop alone. My awesome feelings wore off quite quickly, especially when I realized at about mile 45 that I was out of water with 5-6 miles to go to the next aid station. Yikes. Rookie mistake.

I finally climbed up the insane hill to the start/finish area (it had a rope at one point to help runners climb up) to complete my first loop. I was dejected, exhausted, and cranky. I met up with my mom, boyfriend, and two friends who were my planned pacers, Brian and Annie. Brian was to take take me from miles ~51-73 and Annie was to take me 73-93ish. After changing my shirt, getting in some more food, and refilling my hydration pack, Brian and I headed back for loop #2. 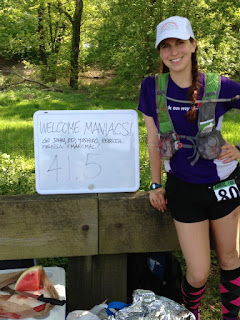 The miles I spent with Brian were so odd. I love him to bits and it was so great to spend time with him, catching up, laughing, and running. The first half of our ~20 mile run together, I was in a cheery mood, boosted up by the fact that we were running together, but I was taking a lot of walk breaks and running slower. The second half, I was in the worst mood ever and was running faster. How that happened, I still don’t know.

Those last 10 miles were really tough. Once the sun set, it got really dark. There was a full moon, but fog prevented any moonshine from hitting the course. Along the flat, straight course, with Brian’s headlamp on, it felt like we were just running through a tunnel that never ended. We could only see about 5 feet ahead of us, with everything else around us being pitch black. I was so rotten to be around, I don’t know how Brian stuck with me. My feet were in agony, so I was left to just shuffle. When I’d try to do the math of how many miles I had left until the next aid station, I couldn’t because the course was off in distance. I was beyond angry about it, but I was so happy to finally get to the aid stations. 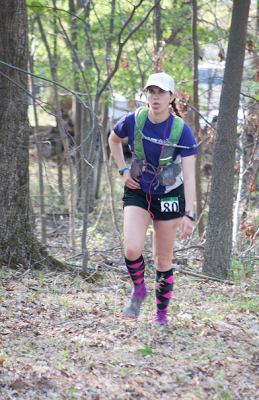 When we got to the ~73 mile mark, I saw my mom and burst into tears. I knew in my head I was done, but was so overwhelmed with anger, sadness, frustration, and agony. I sat down in a chair, shivering from the chillier than predicted temperature, tried to get some food down, and just sat crying knowing I was done. Some volunteers tried to help cheer me up, but my mother quickly told them I wouldn’t be guilted into finishing an optional race if I wasn’t wanting to. One amazing Marathon Maniac, Jim, came to help us other Maniacs, and he kept running to get me more food and got me to eat sugary things. The BF kept rubbing my shoulder in support and my mom kept telling me that whatever I wanted to do was fine, that running 73 miles was something to be so proud of. 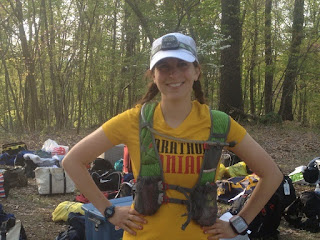 About to start the second lap. I fake being happy quite well.

After about 10 minutes, I slowly got up, told the head volunteer at the aid station that I was DNFing, sat in my mom’s car as the BF, my mom, and Annie put all of my gear in the car, and just bawled. I couldn’t believe that I was quitting a race. It felt so surreal, but I knew I had literally nothing left of me to give. I couldn’t fathom the idea of continuing 10 more miles down the dark tunnel of the course, just to turn around and run another 20 to the finish.

Looking back, I made a lot of mistakes including starting off too fast, not mentally preparing, and not training long enough for my long runs. I had no clue that’s how the night time would be as my last 100 miler occurred in NYC, where even the darkest places were bright and I constantly had distractions. Would I run this course again? Nope. The volunteers were amazing and while I appreciated the course for the first 20 or so miles, the straight, flat course wasn’t enjoyable for me. 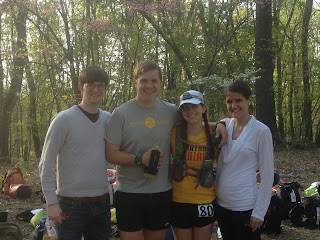 The BF, Brian, myself, and Annie. I have awesome friends.

One thing stuck out to me when I was quitting: this is supposed to be fun. No, not every single moment of a race is great, but overall, I should be getting something positive from the experience. I wasn’t, so I quit. I felt bad that my friend, Annie, came down from Philly to pace me and I quit before she could. I feel bad that my mom and boyfriend came out to see me not finish, but in the end, I think I did the right thing.

Sorry this is such a bummer of a race report, but alas, this was a bummer of a race. I’m excited for the rest of my races this year (20in24, Richmond Marathon, Philly Marathon, to name a few) to redeem myself and remind myself that even with this DNF, I’ve still got some good races in me.