Courtney Dauwalter is a name that’s lit up the internet in the past week.  On Friday, October 13, 2017, only 5 weeks after her Run Rabbit Run win, Courtney lined up for the Moab 240. By Sunday, October 15th, she not only finished the race but, simply put, demolished the entire field; winning in 57 hours 55 minutes and leaving her next closest competitor 10 hours behind.

Courtney started running ultramarathons in 2011 after a competing as nordic skier at the University of Colorado.  And, since 2011 she’s amassed an extraordinary record that continues to build upon itself.  Courtney won Run Rabbit Run not just in 2017 but also in 2016.  Her now famous 2017 Run Rabbit Run win included running the final 12 miles while blind.  And that is not all, in February of this year, Courtney set the new Women’s American 24 Hour record at the Riverbank One Day Classic with 155.4 miles. 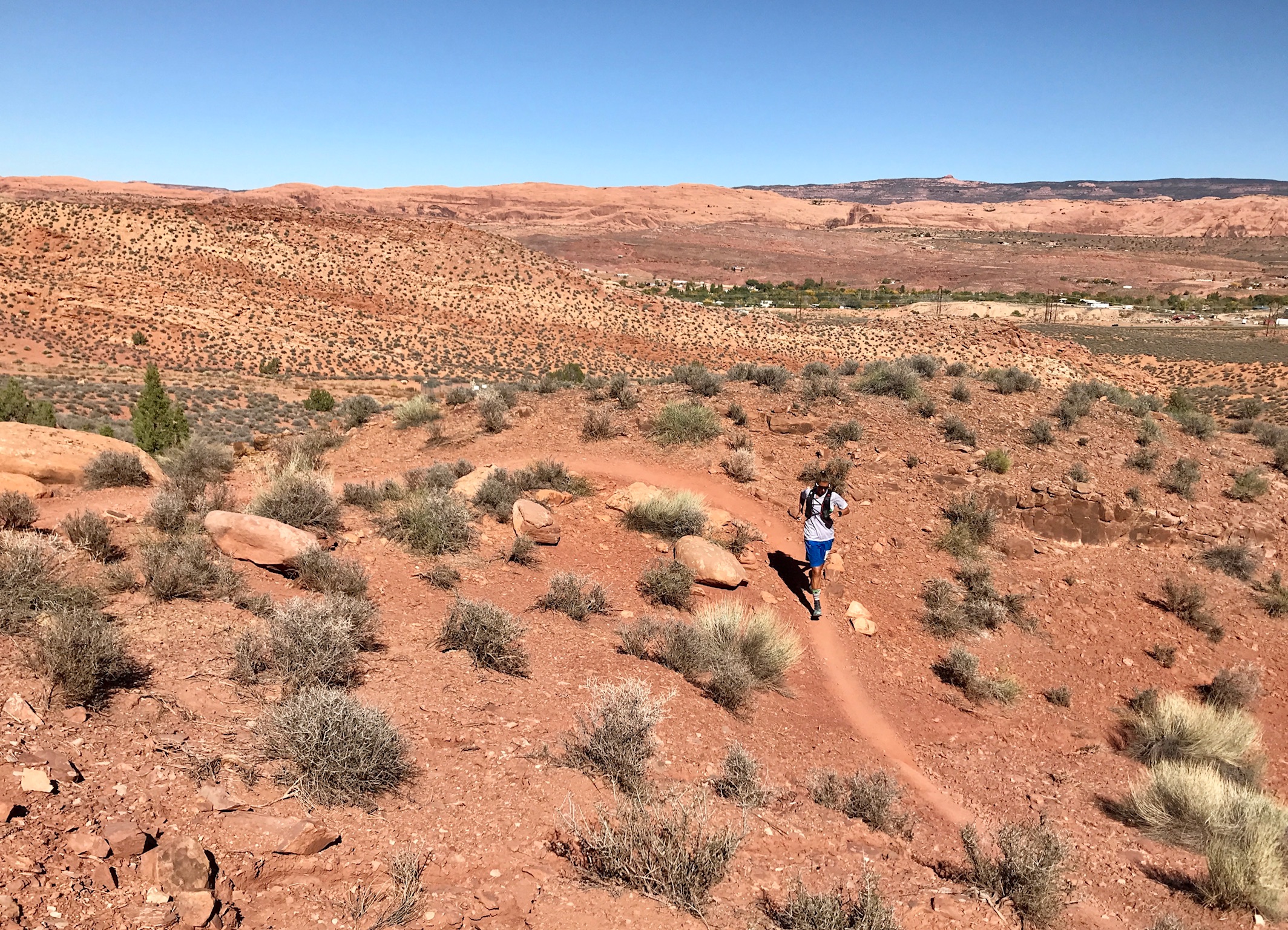 We asked Courtney about going into to the Moab 240 and about the race itself.  She said that while, “you always go into a race worried about that race”, she felt great both physically and emotionally.  With her all-out dominance, we wondered if she had any issues along the way. “I had the normal roller coaster that comes with ultras.  The highs and lows.  Anytime I was at a low, I tried to trudge along to flip the switch back to feeling good.  I was nauseous only once the first night after an aid station.”

We also asked about the mental aspects of a race that long, “Really I was trying to focus on the sections between aid stations because thinking of the total race at the start line was just too much.  I was also trying to take in the views.”  Courtney went on to describe the variety and beauty of the newly minted 238-mile course.

She said now that the race is over and she’s had a few days of rest, “I’m feeling like a human again. The first couple of days were tougher. I couldn’t sleep even though I knew I should sleep.”  After the race, her legs throbbed and the bottoms of my feet were sore but  “actually it wasn’t substantially worse than the 100’s or 24 hours races I’ve run”. 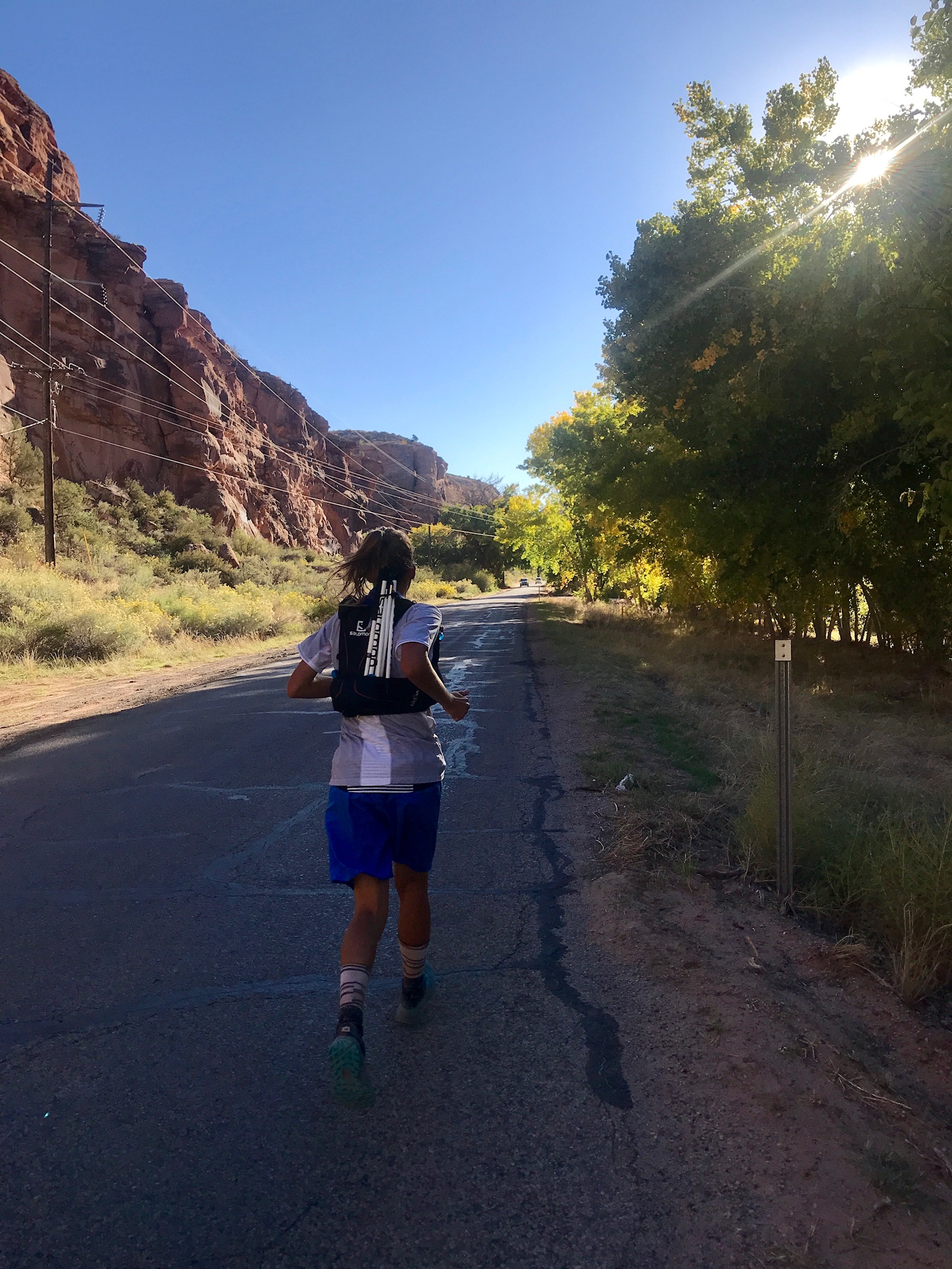 We also spoke about planning for the back to back 100 mile Run Rabbit Run and 238 mile Moab 240.  Courtney said, “I might have signed up for Moab in May, I committed to both early on. My training had me focused and being fully prepared for Run Rabbit Run.”  Then we spoke about her training which historically hasn’t been as formalized as many elite ultra runners.  She laughed and said, “Let’s be honest, I’m still winging it.”

Courtney still has one race this year, the Soochow International Ultra-Marathon 24 Hour Race in Taipei Taiwan then says she’ll be running and doing some cross country skiing throughout the winter.  She says nothing is planned for 2018 yet but is looking forward to pushing her limits to go faster and further.

One Response to Courtney Dauwalter Destroys The Moab 240