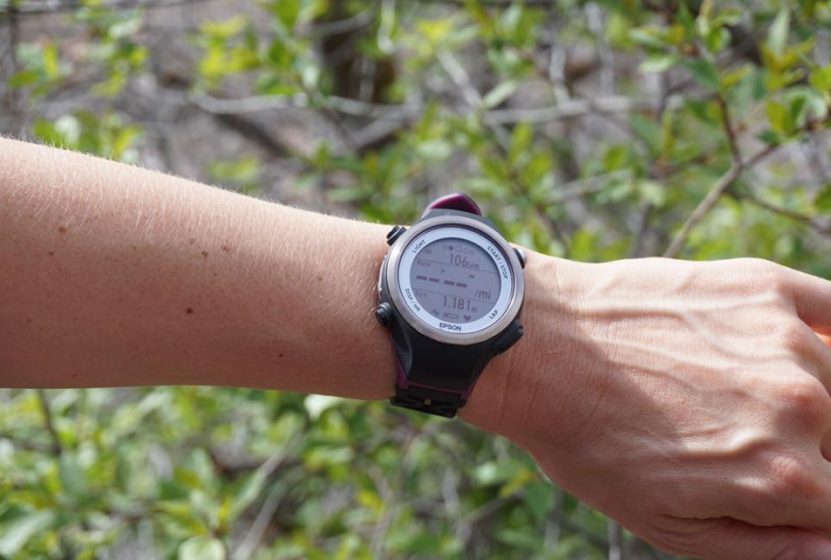 The Epson 810 GPS watch and heart rate monitor is the new big player in run-specialty GPS. With all the features of some of the top brands & models, Epson introduces a watch that can perform at the highest levels for nearly half the cost ($299). From their site:

“With a highly-accurate GPS tracking system and heart rate conveniently measured at the wrist, it tracks distance, pace, altitude, calories and more, and even features programmable laps. A built-in Smart Stride sensor captures stride length and cadence, for accurate data even where GPS is unavailable. Get real-time data on the customizable LCD.”

Our reviewers tested the watch over several weeks, putting hours and distance on the product. Here are the results from that testing.

Over the course of a hilly/mountainous run GPS accuracy can vary between brands and models but up to half a mile, most frequently by around .15 – .2. This is influenced by the number of satellites the watch is linked to, how frequently it pings those satellites (every second or up to once a minute), and how sensitive the antenna is that is built inside the watch. Our test results showed accuracy to the highest level. Comparatively we would put it on the same level as the Garmin Phoenix 3 and Suunto Ambit 3 Peak, two watches built for mountains.

“I’ve run the Zion Traverse 8 times. I know the distance of that route down to a tenth of a mile and have tracked it on three different devices. I can say with certainty that the Epson 810 is the most accurate watch I have used on that route and that accuracy remains consistent on any route I run or race on.”

The more complex a watch, the harder it can sometimes be to manage all of the bells and whistles. The easiest way to set up and manage screens on the 810 is through the Epson App. The process of making those changes and the ability to do so really isn’t that tough and the end result is a fully customizable screen (you can view up to 4 screens in GPS mode) that gives you exactly what you want. Running the GPS functions is super simple and makes for an easy experience.

“I had to actually look up how to customize the screens on the internet as it wasn’t included in the user manual in the box. Once I did that though, making the changes and setting up my watch exactly like I wanted it was very simple.”

“The watch was so easy to operate, I would occasionally start my workouts without intending to.”

Wristband heart rate monitoring has been accepted as not nearly as accurate as a chest strap. While the accuracy can be close, there is a distinctive lag of up to 15 seconds from wrist monitoring to display. The reason for this is because of the delay in heart rate change pumping blood from heart to wrist, then calculating that change to the watch display. This delay is not specific to Epson, but actually an industry standard. So keep that in mind when choosing a watch. Additionally, with any wristband heart rate monitor, the watch band has to fit snuggly against the wrist. If any light gets in between the watch and wrist the sensor won’t be able to pick up the heart rate. Once calculated, however, the Epson displays a quite accurate result.

“It was a little new to get used to as it was a change from the chest strap I previously used. I also had to wear my watch tighter than normal, which took some getting used to. But once I made the transition I found it to be very useful and it has become a part of my regular training.”

While the Epson 810 doesn’t offer social media updates directly to the watch (something we’ve generally considered worthless), it does provide most of the essential features of the other top brands. No, it doesn’t have real-time map of your route or track back. But for $300 who really cares. How many of you have actually used that feature? For the 1% who have, it would be a good idea to stick with those other brands, but for the rest of us 99%, there is no better watch on the market. And with a 20 hour battery life on GPS mode, the Epson 810 is hands down the best value on the market.

“I was assigned to test his watch a couple of months ago. Once I settled in I grew to love it. I haven’t put on my other watch (one I’ve trained with for years) on since and don’t plan to. The Epson 810 is my new go-to watch.”

“The watch is simple in appearance, but impressive in function. Don’t let the large and bulky charger dissuade you. This watch rocks.”