In the High Country: A Film Review

In the High Country (official teaser) from Joel Wolpert on Vimeo.

A natural expansion of The Runner in Winter — 2011’s collaboration between filmmaker Joel Wolpert and ultrarunner Anton Krupicka — In the High Country isn’t a how-to so much as a philosophical exploration of the why of running. With a visual sense reminiscent of Julian Schnabel’s The Diving Bell and the Butterfly and a swiftly moving soundtrack featuring independent musicians Peter Adams and fifteen year old prodigy Cusique, Wolpert expertly paces us through a story told in 5 chapters.

THE pulsating opening scenes feel like the backside of some gritty downtown. I am reminded of Blade Runner, but the shots of clean water and Rockies confuse: Is this man or machine? Conceivably, both. As Anton tells us there’s a ‘sense of familiarity that comes with repetition’ it brings to mind my own miles logged in Arkansas, and how those trees and rivers have indelibly shaped me as well. Home is what defines us, indeed.  There are genuine light-hearted moments sprinkled throughout; witness the calf, who is clearly ambivalent about the whole thing.

IF the first chapter is introduction, the second chapter is exposition. Full of Nutella tortillas, route planning, snow trekking, sun running, the search for self is told visually with little narration.  If we now know where Tony has come from, we don’t know where is he going and perhaps, neither does he. The action begins to rise in chapter 3, as a search for self leads to an harrowing experience. Doing ‘what you must to immerse yourself in a landscape’ means pushing boundaries; finding comfort not as a physical sensation but rather feeling that click of belonging. Like that child’s toy where you put the peg into the correct slot, comfort is finding your niche in the world. Or chimney. 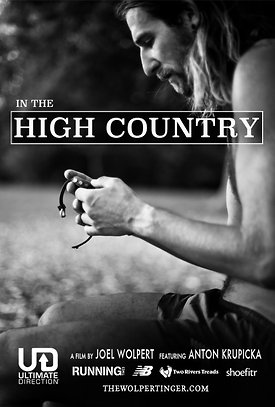 Chapter 4 gives us an emotional break as we begin in search of the perfect shoe for running what others climb. I hope OSHA never sees this film; it looks like something they’d have a heart attack over. The cinematography here is unexpected, as the Rockies are depicted in soft warm light that would look at home in a surf film, but it works surprisingly well here. We see gnarly toes. Bloody knees. The details of a life truly lived in the mountains — those shoes are necessary to chase our muses.

A revelation, chapter 5 opens dramatically with stark grey-scale views and music to match.  What inspires us to climb a 1000′ slab instead of taking the steps so clearly in front of us? Why does this make us feel alive? The mountains teach us both our ‘insignificance and agency’:  being small in the world gives us the freedom to make big decisions. Wolpert reflects this sense of coming alive with juxtapositions of cold snowy grey scenes with warm sunnily lit mountain running.

The team effort of Krupicka’s narration of various scenes and Wolpert’s no-less-quiet storytelling in the form of lighting, timing, and music selection makes this film an emotional half hour. The technical quality is spectacular – all the more so because it was done solely by Wolpert – and its selection to various film festivals seems inevitable. But the real magic of this film is in making an unrelatable man feel relatable; a misunderstood sport, understandable. For all the times we’ve stuttered and searched for an adequate answer to that eternal question “Why am I doing this?”, we finally have an answer…or at least, the beginnings of one.

Oh and, make sure you watch the credits roll. It’s a worthwhile four minute addendum to your half hour.

7 Responses to In the High Country: A Film Review