5 Tips for a Safe and Enjoyable Adventure Run 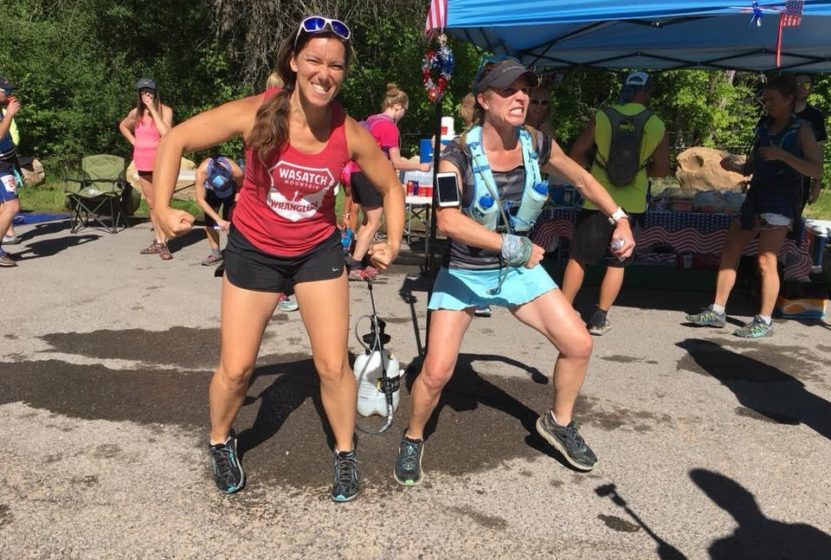 The morning is cool, with shimmering hints of the heat to come later in the day. I’m not too hot for my hoodie yet. There is enough of a breeze that the canvas of the canopy above is breathing, flopping lazily. Just right for mountain running. The flies haven’t shown up yet, and the food bowls are neatly arranged on our tables. The water tanks sit chilly and untouched. The group that has gathered is a good one. Kind hearts, fierce souls. Our aid station captain limps along without complaint. She is recovering from surgery. She’s not the only one that’s working through injuries. There are thousands of collective miles between the group of us and an unspoken camaraderie. A few of us have run this race. The people we are here to aid are our people. Our friends, our trail family. This is how we stay sane or involved, or just entertained. We love it.

A call goes up and a cowbell clangs as a figure appears through the trees. Howls and whoops as the first runner comes in panting, sweating, grinning. He feels great at mile 26. His handheld bottle is taken and refilled as he snags a fresh chunk of watermelon and accepts high fives. Another call rises, and he glances over his shoulder at the second runner as he accepts his water bottle and moves to go. In and out. We send him on his way. He’s on a mission. I watch the dust float up from his shoes as he takes off around the bend, and cheer him on his way. Our next runner is already in the capable hands of other volunteers as I turn back to the aid station. He’s out even faster. We cheer louder. He’s on the chase. 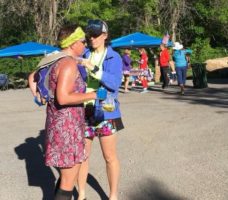 There is a fair amount of downtime in this forward section of the race. The temperatures start to climb and we strip our layers, revealing club shirts and costumes. The runners are few and far between. We fidget with the snack food and test out the flavors of Jelly Bellys. Someone pulls out a Bluetooth speaker and a dance party breaks out. Laughter and conversation are peppered more and more frequently with runners to help. They come in waves. Scores of friends are greeted by cheers and swept up in sweaty, unapologetic hugs and high fives. Volunteers venture into the crowd of bodies to pick out empty bottles and fill water bladders. Each stranger who comes in is sent out a friend, with best wishes and loud cheering. Pacers arrive by car, fresh and ready to run. Most watch anxiously for their runner for just a few minutes before the instinct to help takes over, and they step in as temporary volunteers. They prepare food or fill ice bandannas, or bandage blisters until their ward appears, then they partner up for the long haul and leave us.

I spot a dear friend. He is moving slowly, pale and miserable in the heat. I greet him enthusiastically and he asks for a place to lie down. We don’t have cots or blankets for this 50 miler. I offer my SUV and a friend helps him over to it, collapsing the seats so he has a place to lay, and opening doors for ventilation. His pacer brings ice as I move to attend to a runner covered in blood. He has a gaping wound in his side that he has attempted to duct tape closed. He needs stitches. Our First Aid kit is extensive but is missing gauze pads, let alone a stitch kit, and I’m no doctor. He tries to tell me he’ll just tape it again, but I’m not having it. I settle for antibiotic ointment, gauze from the emergency kit in my car, and Coban. He thanks me profusely through a mouthful of M&Ms, and assures me he feels great to continue. I call him a badass and cheer him out of the station before running back to check on my friend. As I return to the car, he finishes puking out the side door. It’s quiet in the car. I turn on the AC, but his temperature drops too fast, and he’s suddenly shivering. His body isn’t regulating. I fetch him some gentle food to try and sit next to his head. He’s using my foam roller as a pillow. He turns toward me, eyelids heavy, and sighs. “So here we are again.” We have been here before. This sickness isn’t new to him. I’ve helped him in and out of many aid stations in many races. I know that he’s tweaked everything from diet to electrolytes, to training to try to fix his issues. I’ve watched him work through it to finish, and I’ve watched him DNF. I have the utmost respect for my friend.

“You must wonder why I keep doing this to myself,” he quips with an exhausted half-smirk.

We end up in a philosophical conversation about motivation and shared suffering while he tries to calm his body. I teach him some yogic breathing to soothe his central nervous system, and a few minutes later, he’s out of the car. He’s in rough shape but moving. I watch him leave with a sentimental hope that he’ll rally soon and I’ll see him cross the finish line.

As the last of the runners chase down the cutoff times, the race comes full circle for us. Downtime with a few runners. We’re more liberal with our snacking now that we know the runners are fed. The last few get similar treatment to the first few. We cheer them hard and loud. We fill their bottles and see to their needs, ice them up and send them out fast. It’s a different mission they are chasing, but they are chasing nonetheless. We break down the tent and tables and bag up the leftover food. Clean out the coolers, repair the disarray of the First Aid Kit, load up the supplies. The race isn’t over, but our part is. We embrace and say our goodbyes. 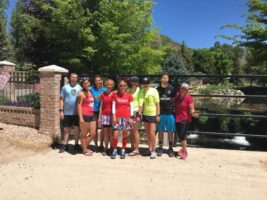 It’s not every race that I get to see the finish line. Our aid station is an hour-long drive from the finish. I don’t really have a reason to go. No one specific is expecting me. I go anyway. Find parking, haul my gear in, and set up a spot with a good view of incoming runners. I spend hours wandering, cheering, congratulating, sharing food and drinks, and listening to race stories. I stay until evening, waiting for every friend I can remember coming through. I don’t know a lot of the runners’ names, but I smile and cheer as familiar faces appear, 24 miles more haggard than I last saw them, but hope-filled and victorious. I’m brought to tears and smiles and laughter. I should probably go make dinner for my kids, but there is a tug that I can’t shake. I want to see him finish. Please let him finish. Finally, I pack up and drive down the canyon into the evening sun.

Later, as I settle into bed, sunburned, sore, exhausted, I check Facebook one last time for race news. He finished. “YES!” I startle my husband with my excitement and I tear up a little. I share the news and he chuckles.

Maybe I care too much. Maybe it’s worth it. 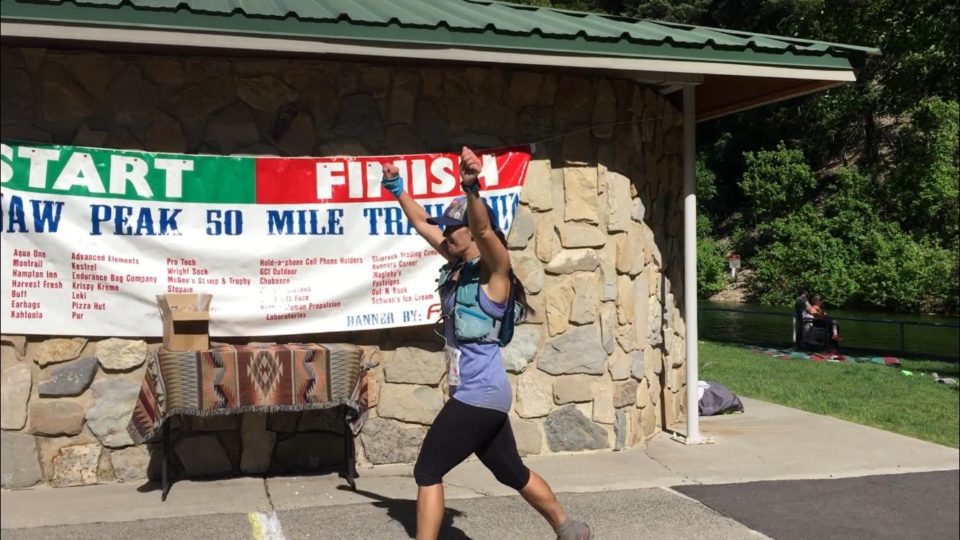 2 Responses to Chronicles Of An Ultra Volunteer