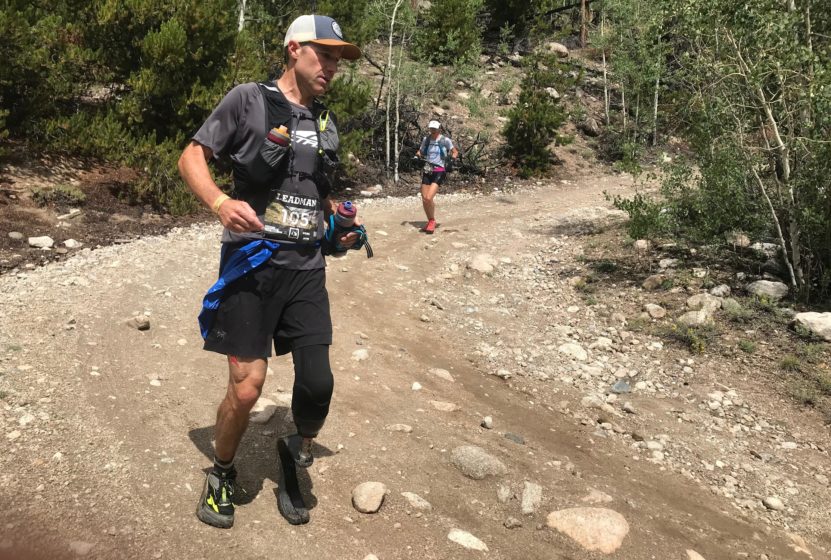 (Logan, UT — August 21, 2018) Altra’s Elite athlete Dave Mackey completed the final race of the grueling Leadville Race Series to achieve the coveted Leadman title. More impressive is the fact that Mackey, 48, completed the series only 20 months after having his leg amputated.

Previously in 2014, Mackey completed the Leadville series, placing 2nd overall. Tragically, 10 months later he experienced a horrific accident while trail running. After multiple surgeries and an eventual amputation in November 2016, he was determined to attempt Leadman once again, this time, with his new prosthetic leg.

Mackey’s times for the Leadville Series, which features elevation from 10,200 to 12,600 feet through the Colorado Rockies are as follows:

“It’s crazy to run 100 miles with a prosthetic leg,” said Mackey after finishing the race. “There’s so much more potential for problems beyond the regular ultrarunning problems: cramping, blown quads and sour stomach. Yet somehow, I was able to mitigate skin damage in my socket.”

“My longest run was 50 miles in July and it almost crushed me. I had big problems in the 100 mile race like many runners do, and seriously considered dropping due to blown quads at 50 miles, but thanks to keeping on and excellent pacers, I worked through it.”

“100 miles is light years harder than any other race I’ve ever run. All in all, even I am blown away by the outcome: 24:55:15 for the ‘big belt buckle’. Leadman finale, mission accomplished!”

Before losing his leg, Mackey was a champion trail runner. He won North American Ultrarunner of the Year in 2011, was a two-time USA Track and Field Ultrarunner of the Year, won USA Track and Field trail titles for the 50K, 50 mile and 100K distances and was the first to run under 7 hours on the famous rim-to-rim-to-rim trail across the Grand Canyon with a time of 6:59:56.

Now, Mackey has the distinction any athlete would covet: he is a two-time Leadman finisher.

Mackey’s shoes of choice for the Leadman races were the Escalante 1.5 and the Torin 3.5 Mesh.

Mackey’s next race will be the New York City Marathon on November 4, followed by the JFK 50 Mile on November 17, which he won in 2003, but has not raced since. Follow Dave Mackey on Instagram and check out the Team Altra Facebook page to stay updated on Mackey and all the accomplishments of Altra Elite and Red Teams.

While working at a running store, Altra founder Golden Harper was frustrated that modern running shoe technology caused poor running form and had not decreased running injuries. His passion to create a shoe that followed the science produced Altra’s FootShape™ toe box and Zero Drop™ platform. Since its founding in 2011, Harper and co-founder Brian Beckstead have grown Altra from one to 30 shoe styles, winning multiple Editor’s Choice awards and distribution in more than 60 countries. Join the conversation @AltraRunning and #ZeroLimits on Twitter, Instagram and Facebook.