There’s something magical about the sound of crackling Autumn leaves under your feet as you sprint down the trail. The cool air, the crisp smell of maples and dew, and the vibrant colors wake my senses. With the end of summer and all of my pacing duties complete, I needed something to renew my running spirits. This Fall seemed to be exactly what I needed. 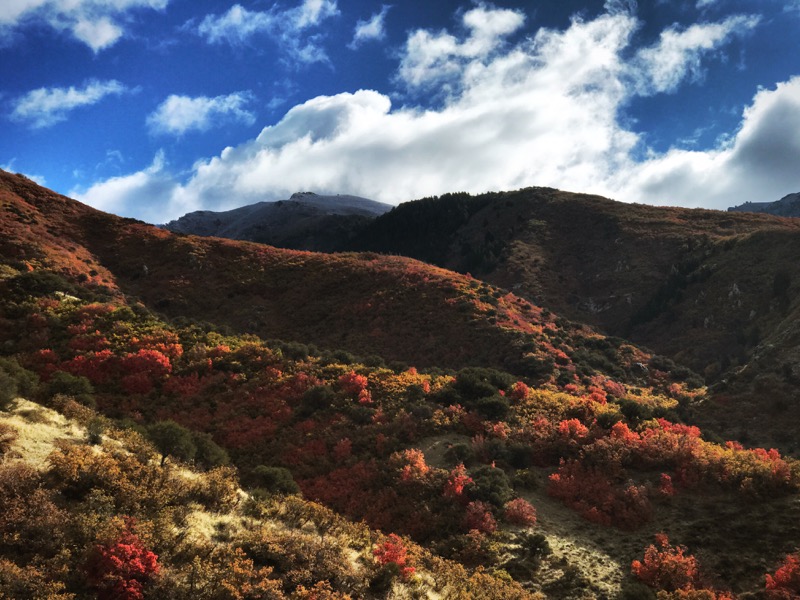 The view from my back window looks towards a mountain canyon, a vibrant mix of vegetation and rock. With late September approaching, I was surprised not to see the reds popping. The last couple of years had been a little lackluster as far as the colors went and I was hoping this year would be different. Then came October and WOW! 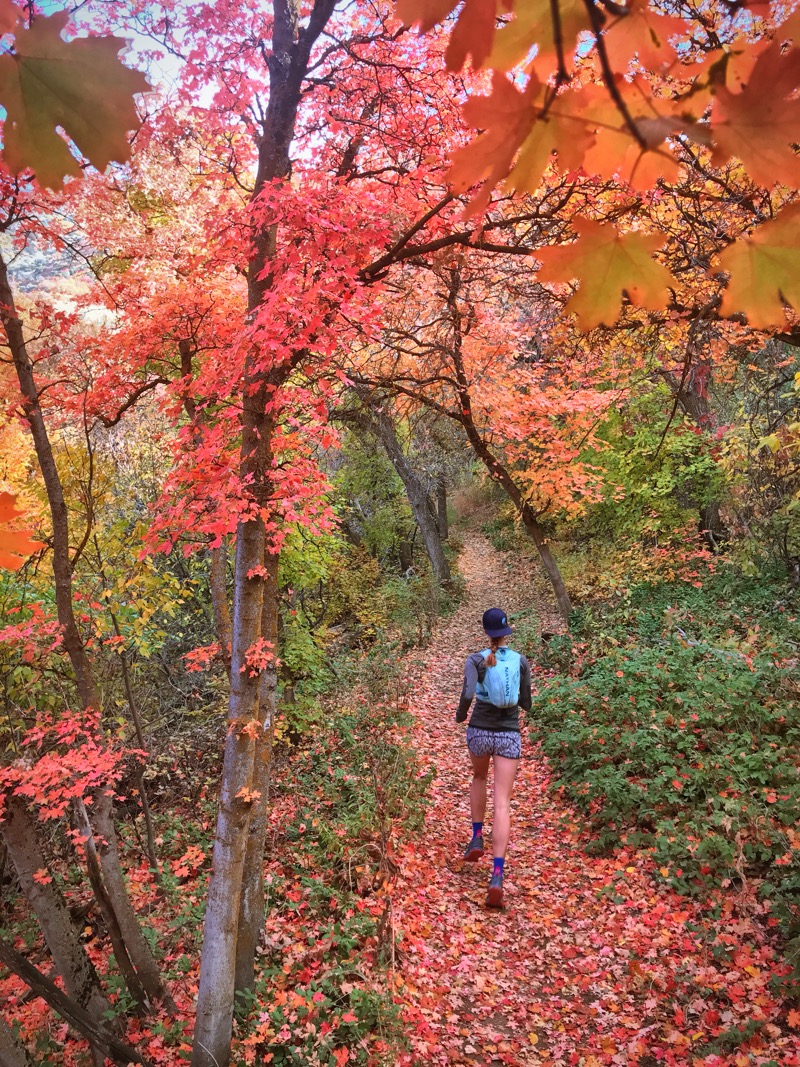 The maples had never seen so bright. With several early winter storms threatening the mountains, I wondered if I would be able to get out and enjoy the trails. Luckily, the Indian summer followed and we were treated with the most spectacular fall in my memory. 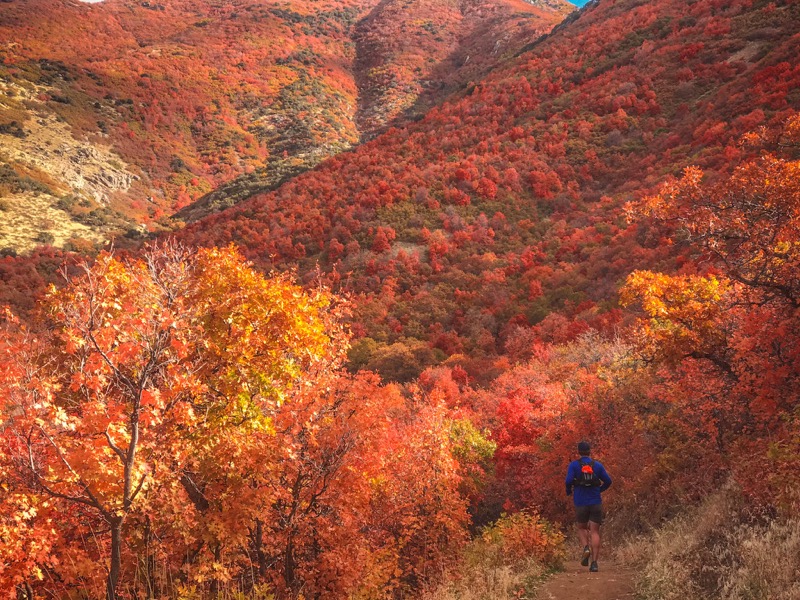 A friend and I planned a run that would climb up a canyon to the Great Western Trail in Kaysville, Utah, hitting the iconic Chinscraper and traversing across the ridge until we felt like dropping back down into the valley. The late start allowed us to miss the freezing temperatures that had hit the night before. Rain and snow managed to clear out all of the haze in the valley and left the mountain tops frosted. 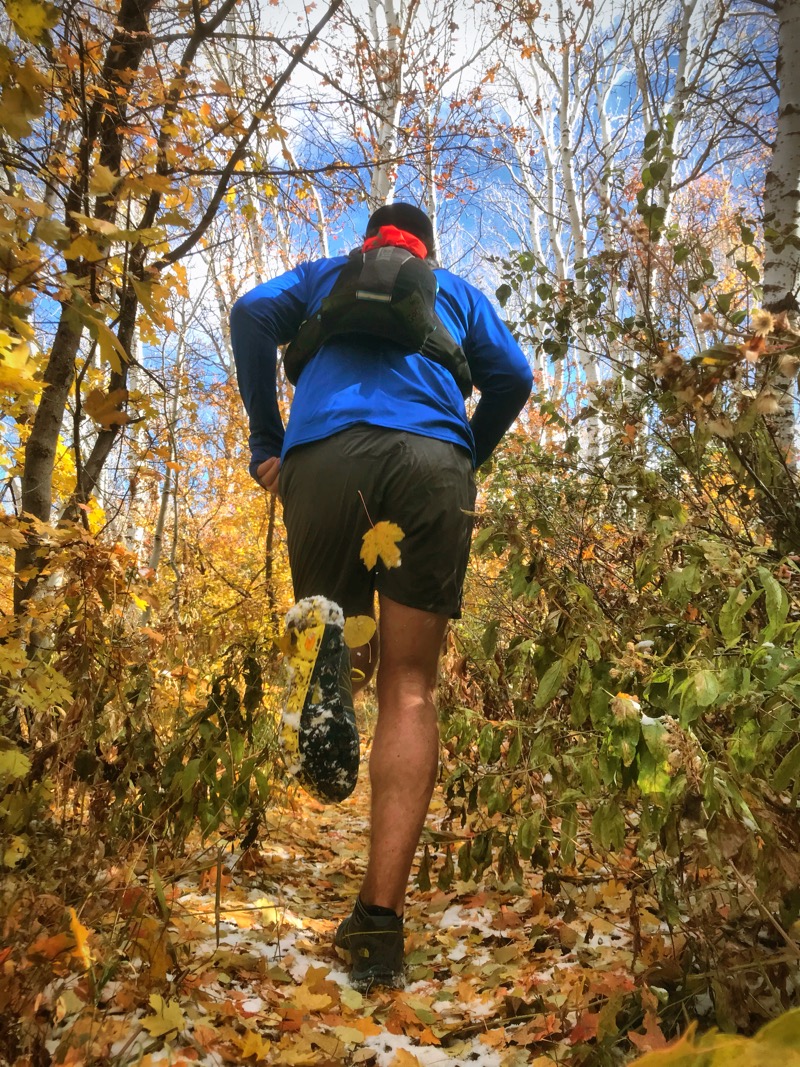 Immediately we found ourselves surrounded in the most brilliant reds and oranges. Leaves lined the trails and the sun shone through the trees, highlighting the drops of dew left from the earlier rain. Today wouldn’t be a training run. There was no concern about time or speed, only a long day in the mountains before winter hit. 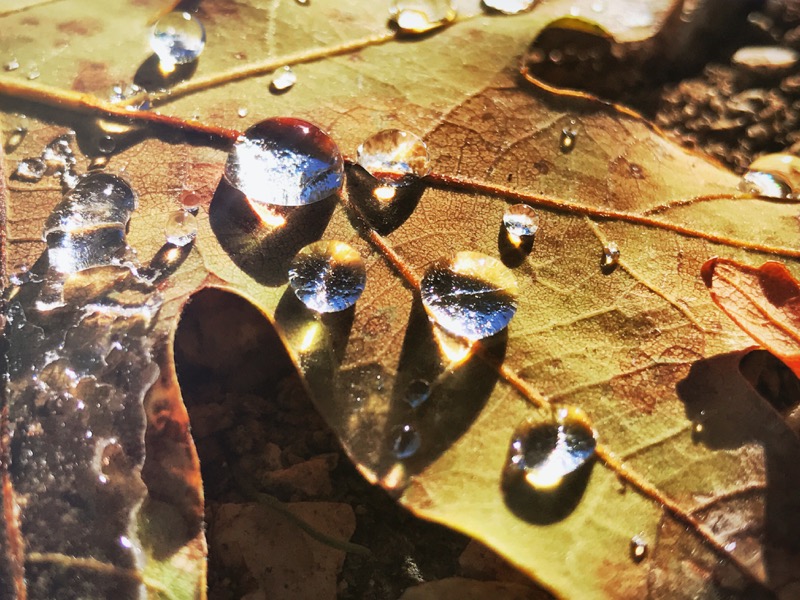 The climb, though grueling, was magnificent. I was overwhelmed with the beauty of the morning and the trail and I felt a deep connection with the land around me. Several strides would pass and I would stop again to capture another leaf or view of the valley below. 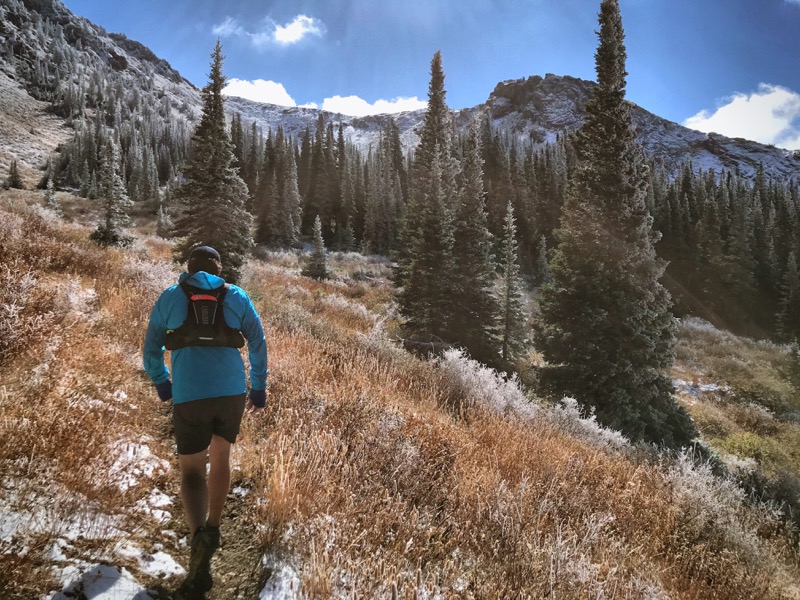 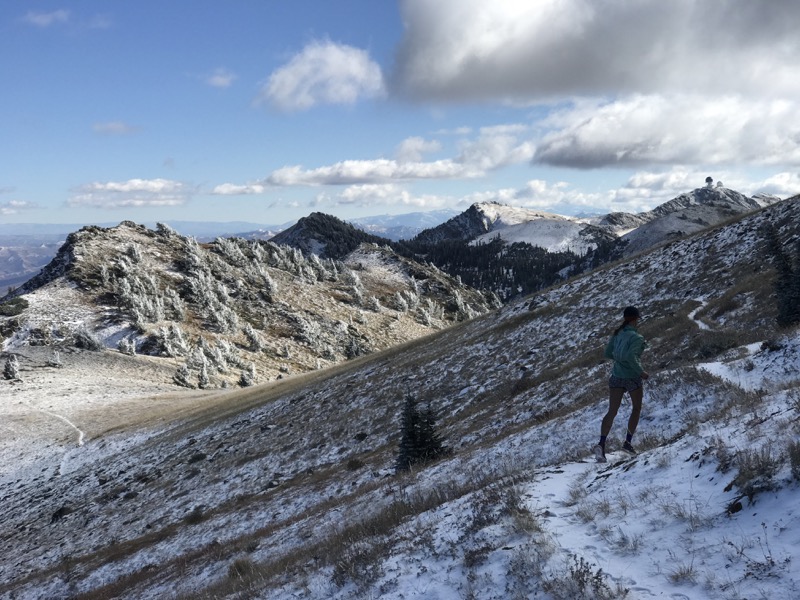 Deep greens were accented with the magenta maples and copper oak. As we climbed higher, we found ourselves surrounded with a dusting of snow and ice. It was deceivingly cold but movement kept the blood flowing to my fingers. The trees were windswept, and you could see the direction the ice hit the night before. I wanted to take in every moment. 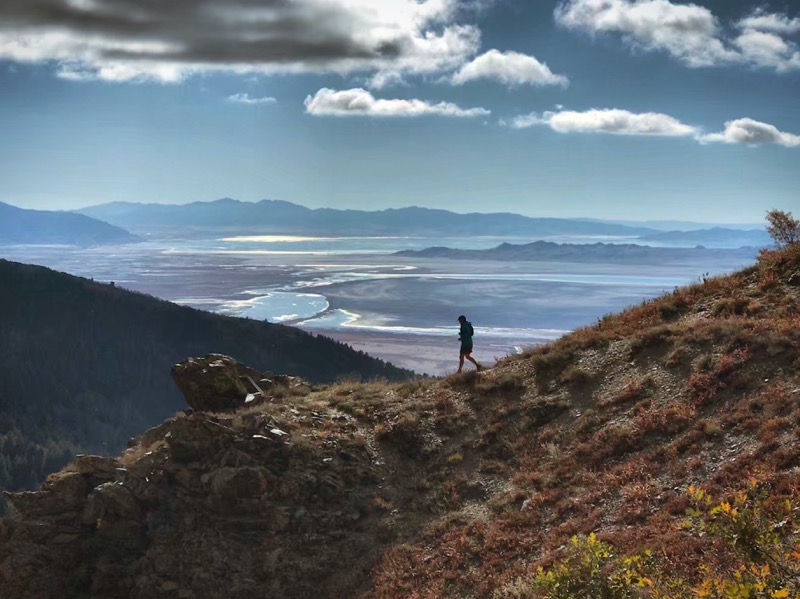 After several hours of traversing through the frosted landscape, we came to the double track trail. We were short on food and wanted to take in the most scenic route possible so we decided to descend d down Bair Canyon towards Fruit Heights. The late afternoon sun backlit the trees. It was refreshing and invigorating. The four miles to the end of the canyon went quickly. Eventually, I gave up taking pictures, nothing could quite capture the beauty. 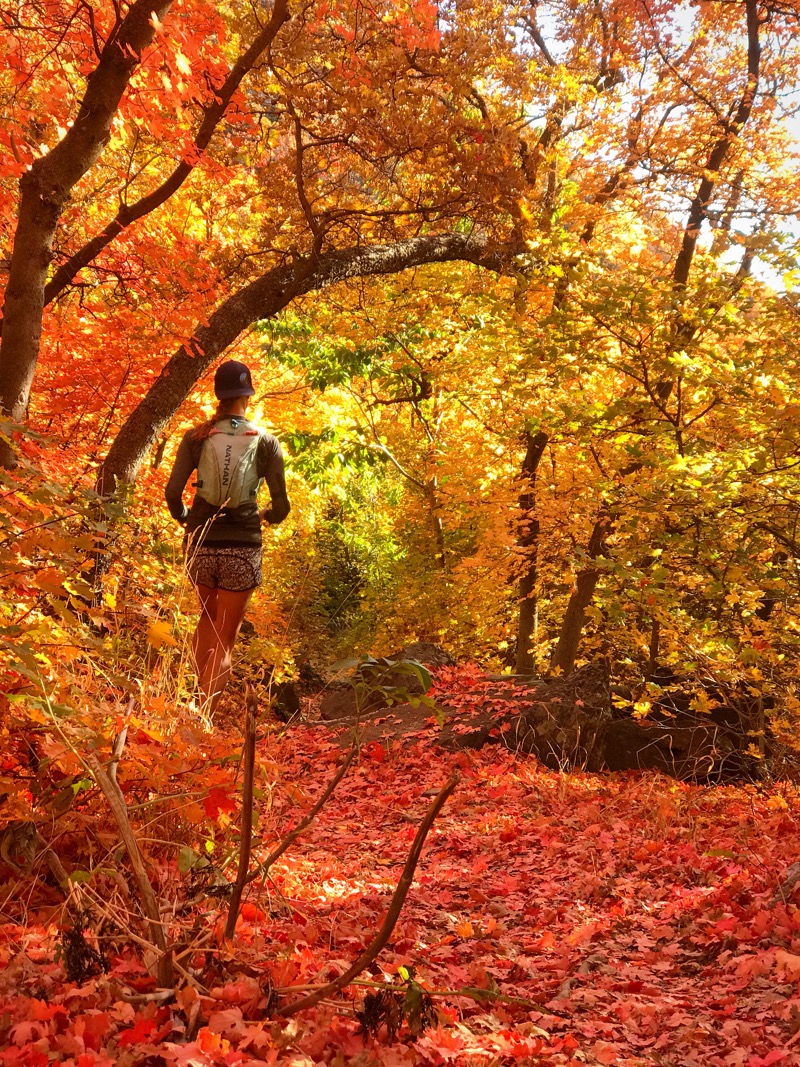 Sometimes you just have to be there, you have to experience.

October is my favorite month to run. It is so easy to get caught up in the chaos around us. Work, school, family, and the approach of the holidays add extra stress. Take a moment. Hit the trails, I promise you will not be disappointed. Every run the last several weeks has woken my senses. I don’t feel the pressure to train, just a desire to fly through the trails and enjoy until the last leaf falls and the valley is deep in snow.