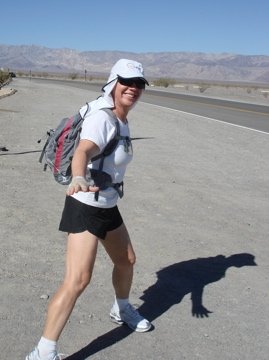 I want to share one of the most powerful and inspiring stories of my life. It came from my experience as a crew member at the Badwater 135 ultramarathon in 2007. I had the life changing opportunity to be a member of a multi-cultural team, which came together, through intensity and challenge. What eventually happened was a truly a miracle and testament to human potential.
Monica Otero, our athlete, was 53 years old at the time. She was a cancer survivor and a Type 2 diabetic. She was a mother, and a believer in Jesus. Monica was an ultra athlete to her very core.  She earned her place at the infamous Badwater 135 through her life story, her endurance background, and her completion of  the, “Caminho da Fe'”, Way of Faith spiritual journey walk. The Caminho da Fe’ is a  308 mile, 17-20 day journey by foot, which take the “pilgrim” along a spiritual journey between rest areas, often churches or similar places of worship.
Monica did not speak English. She only spoke Portuguese and I had to speak poor Spanish to communicate directly with her. The language challenges on this team were extreme, but also brought incredible humor in times when realized the ridiculousness of our situation.

By happenstance, I was brought aboard Monica’s support crew for the 2007 Badwater 135. The team was made up of American and Brazilian “ultramarathonistas.” Among our team members were dear friends of mine, Pat and Karen. Cindy Yankee, another friend, was there with us. 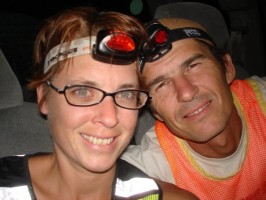 We also had Jarom, a fluent speaker of English and Portuguese. From Brazil, we had Marcio and Marta. Marta spoke broken English but Marcio…Oh Marcio! He spoke in rapid, incomprehensible Portuguese…and the other Brazilians told me they couldn’t understand him in their own language! The only thing Marcio could say in English was, “Buttfuck.”

I arrived at the Furnace Creek Resort at about 3pm on Sunday.  I finally found the adjoining motel rooms but I questioned whether I was in the right spot. The rooms were in complete dissaray, with clothes thrown about and open coolers of half-rotten food.  I walked around confused in the shared rooms of the Brazilian teams. Then things got stranger… Scott Jurek walked inside and spoke with a representative of Brooks running company. Brazilian ultrarunner, Valmir Nunes walked in the room wearing only a pair of yellow speedos. He started shaking his hips around and singing something in Portuguese.  I wasn’t sure whether I was awake or dreaming. Half-naked Brazilians were walking around, hugging and dancing. It was 95 degrees inside the room.

I tried to find someone that spoke English in these various rooms. I found a guy laying on the bed of one of the rooms. He pushed a tray of food on the floor so I could sit down. I asked him what the hell was going on. He was totally relaxed…pulled out his ear plugs and told me they were getting ready for the race, “Brazilian Style.” I was really starting to get worried about what would happen when I got in a vehicle with these people for the middle of Death Valley.

We walked to the race brief at the auditorium. I stood next to Dean Karnazes…My strange trance continued.  The race brief started but I was still trying to figure out what kind of weird dimension this was.  I recognized faces all over the room. I was excited, scared, happy, and concerned all at the same time. Being there, at that moment… It was like I’d stepped into a  book  about ultrarunning written by someone on LSD. I was no longer reading…I was now inside the book and tripping on the same dope.

Our crew was very disorganized come race morning. There were not enough seats to shuttle us all to the start. I was already feeling the tension between those “in charge” and those of us who were volunteer crew members. I quickly learned that Brazilians did things much differently than Americans. It was explained, that Brazilians live for “today”. They didn’t plan much for the race because they were so involved in being happy and full of love in the days prior.

I wish I could share every thing that happened…but I can’t. Badwater, itself, is one of the most spiritually powerful places I have ever been in my life. At 282′ below sea level, the silent stillness fuses with an intensity of heat unlike any other place on earth. For me, it is as if time has stopped.

Monica took her place among the other athletes and began her wave at 10am. We crewed and paced…sprayed her with water. We did what we’d read about in books and online. We had so much more to experience, however.

Our team was not working together, and it showed. By that evening, I was extremely frustrated. Monica had come to a complete stop and yelled at us in Portuguese. Jarom translated that she wanted to sleep in the van “alone”. It had all become a sad joke..tired, dehydrated, sleep-deprived already. Monica rolled out of the van and began vomiting. I believed her race may be over already, at 40 miles.

Hours later, we were met with a great challenge. Monica passed out on the floor of a motel room provided by race staff. Marta, Pat, and I were the only crew members awake. Marta was upset with me for not being a team player, and I was angry at her for being so disorganized with delegation and planning. Pat stood between us and mitigated a very heated discussion about how to get Monica up and back on the road. That battle lead to a compromise, which favored my plan to let half the crew rest and the other half work in shifts, until were were in better physical condition ourselves.

That was the turning point for us. Marta relinquished some control of the crew…and we split the management into an American support team and Brazilian support team. Two hours later, we woke Monica and lead her to the road where she started climbing in the heat of day 2. She was only supported by Pat, Jarom, and I. We worked out our roles and cheered her with passion. She mumbled in her language and Jarom told us she said, “THIS is how a team is supposed to work.”

Mathmatically, Monica should not have been able to finish the race based on her early miles. But, because of this change in energy, she started moving much faster. We kept nutrition moving through her body. We made her laugh… and gave her some of that Brazilian love. She came to enjoy “Jerry’s Massage” and asked for it every 20 miles. I would lay her down on the blanket and roll out her exhausted shoulder muscles and legs. She would speak to me in Portuguese, but I knew what she was saying. She was thankful…and gratitude is given and received through the heart.

The Brazilian half of our support team returned and I rotated out with Pat for a break. We all returned to stay together on the last day…while Monica continued moving through that extreme environment, without sleep. She seemed to thrive off the energy we gave her. And, after the difficulties we experienced as a forming team…it was wonderful to find ourselves all behind her, pushing her with our laughter and excitement.

Monica Otero finished Badwater that year. It took her over 50 hours. In her final climb up Mt. Whitney, she was delirious and beyond human exhaustion. Her physical limitations were left far behind…and she fueled her body on the energy of things around her. She tapped into her faith, and trusted her team to care for her safety. I get emotional when I write about this or watch the video… You see, Monica Otero did the impossible.

She is an inspiration to me.