A runner without races?

Blood, sweat, and tears. It takes more than most people could ever imagine to finish a 100 mile foot race. It’s not just the physical effort either.  It’s the months and/or years of physical training, dedication, planning, and sacrifice that is required to arrive at the starting line. Of course there is the emotional roller coaster we all experience through training and races…from daily runs, through taper, and during these incredible events themselves. Running ultras takes every one of us through a whirl of emotions that sets our subculture apart from so many others.  Like it or not, the real you can be revealed through this sport. It’s humbling.

When I hold any one of my 100 mile belt buckles, I am immediately transported to that time in my life. I remember with great clarity the thoughts and concerns I had coming into the event.  I smile at the memory of seeing close friends before the race.  I laugh at the sleeplessness I had the night before the gun went off.   I remember the sights, sounds, and nervous chatter of the starting line. I clearly remember conversations with volunteers and other runners on the course. Without effort, I call up the emotional highs and lows I had throughout the day. Of course, I can relive the finish line in my mind over and over again.  When I hold these buckles, I am not just holding a piece of metal. I hold memories. These buckles have energy.  They memorialize the blood, sweat, and tears we expend in our relentless effort to cross the finish line.

I’m not a cowboy. The only belts I’ve ever bought came from a store somewhere and the buckles on those belts were meaningless except that they helped hold my pants up. The tradition of belt buckles in ultramarathons started way before my time.  In fact, it started just before I was born.  I’ve often considered wearing one of my finisher buckles to the race when I returned the following year.  I had a strange thought; however, which I kept to myself until now.  While I maintained these feelings about the buckles themselves, I quickly dismissed the thought of attaching the buckle to some random belt I bought off the shelf at a department store. In my mind, I felt that a finisher’s buckle earned with such sacrifice should only be worn on a very special belt.  For these reasons, I never made any effort to purchase a belt or even pursue the idea of getting one.

Today I visited a local gun show. I was joined by my 7 year old son, Jalen. As we walked the many aisles of tables with guns and knives, I realized there was little for me at the exhibition.  I then noticed a booth with a bearded man inside. It was the booth of “Sundown Leather Company”. Cheyenne Mitchell was a leathersmith.  He had the battered wooden table and cowboy mustache to prove it.  I thought about my race buckles and inquired with him about a belt that would work for me. Cheyenne told me he could make the belt for me right then.  I spent a few minutes looking at the various colors and designs at his booth. I chose a belt and handed it to him.  I then watched a true craftsman in his element.

Cheyenne the leathersmith measures, trims, and pounds holes to customize the belt.

Cheyenne the leathersmith trimmed, shaved, and pounded the belt as if he had done it a million times. As I watched this expert leathersmith work with his hands, it was obvious he was a skilled artist of this bygone profession. I thought it likely he absorbed his skills from his father or grandfather…perhaps he was descendant of a lineage of leatherworkers.  He flipped the belt on his ragged wood table and punched holes with one swift strike of his hammer.  He trimmed and filed the edge with incredible speed and precision. 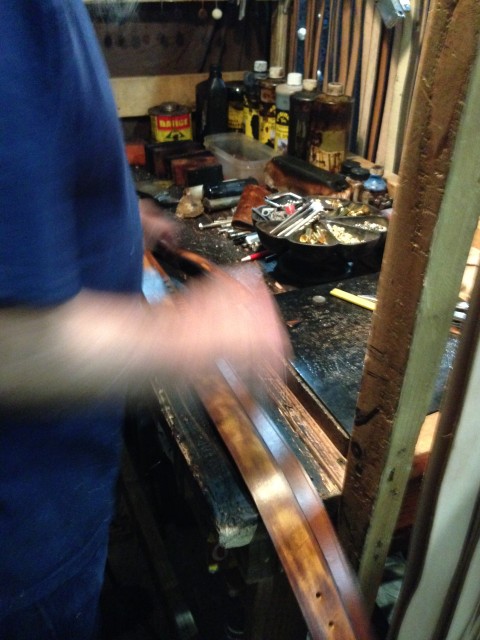 It was then that I became a little choked up. I didn’t see it coming at all. A flood of emotions came to the surface. I had been watching this man work with the leather for several minutes. I couldn’t help but acknowledge the years of work it took for him to be great at what he did. His finished product was flawless and beautiful. Friends, it was truly a special belt. It was the perfect belt for a buckle which contained so many extraordinary  memories. Blood, sweat, and tears. He was as fascinating to watch as it was to see the belt come to completion.

Cheyenne told me the belt cost $32. I handed him $40 and whispered, “Thank you.  Keep the money… this means a great deal to me.”

Give it all you got… Blood, sweat, and tears. 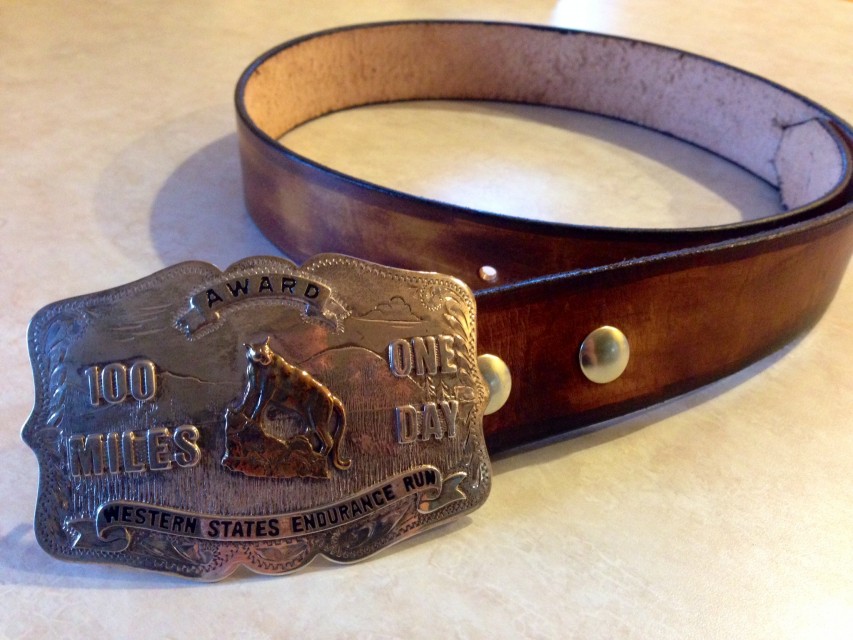 4 Responses to Buckle and Belt