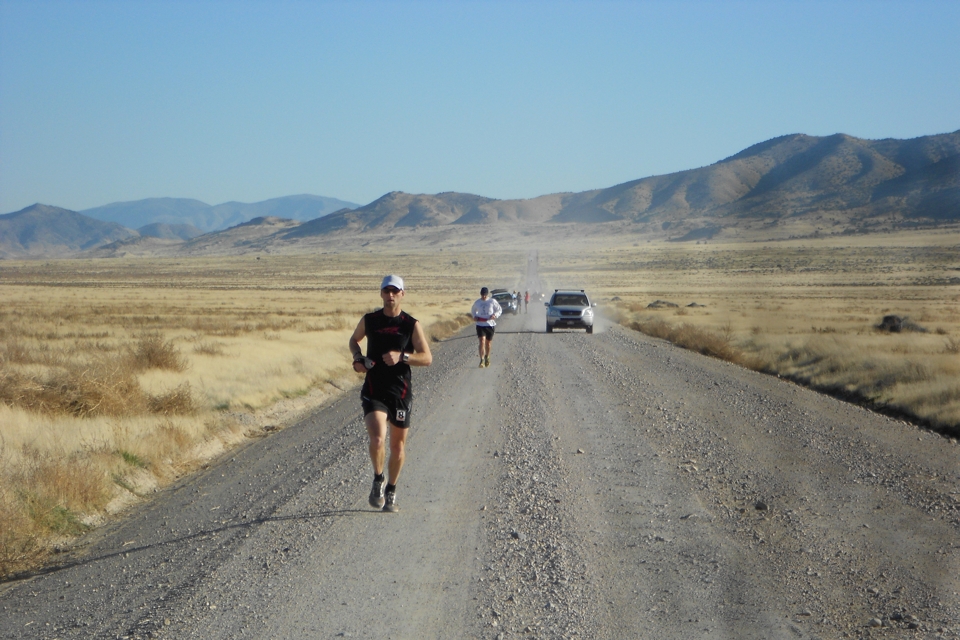 We know where we are.   Trust us, we know exactly where we are.   We are ten hours behind you, that’s where we are.   You few who move so swiftly, gliding over the trails, the rocks, the roots;  through streams and over boulders, doing so so effortlessly at a speed we couldn’t fathom on flat pavement.   You few who run with such efficiency and grace that we can only read about it on web pages and in printed rags. . . and religiously do.   At midnight we know where you’ll be – snug in your beds or your sleeping bags, showered and rested.   While we are still slogging out the miles through the darkest hours of the night you’ll be dreaming away of puppy dogs and marshmallows.   With a bit of luck we’ll make it to the finish line just in time to see the race directors hand you your award for first place or receive the all-too rarely coveted sub-some-ungodly-time belt buckle.   We know you’ll have done the whole course in less time than we took to drive to the starting line from our homes only one state away.   Kudos to you, the few, the elites.

We live in misery, sleep deprived and dirty.   And although we travel the same paths, through the same dirt and streams; even though we slog through the same bushes and over the same boulders, we do it in hopes that we’ll just finish.   Or at best, chase some elusive random time goal we dreamt up in our heads, a goal that means nothing to anyone but ourselves.   We run and walk for hours on end because we love the challenge and the beauty of our surroundings.   We enjoy the companionship of our fellow competitors and value the new relationships we are building over those countless hours in the dark.   We know you do the same, just with a slightly smaller group of people and in less time. 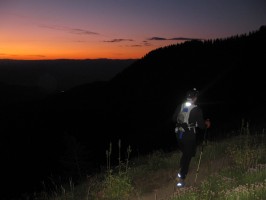 Scott Wesemann watching the sunrise as he presses on to morning during his first Wasatch Front 100.

We, the 99, often scoff at you and your eliteness.   We talk about you during our runs, critique your training, your gear (or lack thereof), and your philosophies.   We stalk your blogs and will even comment, making stabs at how you’re over-trained and are too ready to race.   We look down our noses at you when you get injured and site your over-eagerness, your excessive miles, and insane amount of vert you put in each week.   Of course, we never make the correlation when we start to push our own miles and vert and end up injured because ultimately we are still lucky to put in half of what you do each week.   Is that our fault?   Nope, it’s yours because of that pedestal you stand on, because we still aren’t worthy.   We love to sit around tables sipping our drinks and point fingers about how you don’t know what it’s like to be us, although we’ve forgotten that you’ve been doing this for twice as long as we have and you paid your dues the same way we are now.   We also forget how often you stay after finishing your race to cheer us in as we finish ours.   We throw aside how nonchalantly you accept your prize and spend time chatting with us about our race because in the end you’re going to head off and talk in-depthly about your race with Mr 2nd and Ms 1st, as you should.

What we really forget is that you ran the same race we did.   That even though you ran it half a day faster, the energy and output it took you to achieve your goal is the same as it takes us to achieve ours.   And while you may not have to deal with time cut-offs you have the pressure of being in the lead or chasing first place.   You have the stress of sponsorships and the knowledge that an entire world is watching and critiquing your every move as they sit around tables sipping their drinks.   What we, the 99%, forget most often though is that no matter what place we finish and in what time it happens we are all still just part of the .01% of people on this planet who can even complete an ultra, regardless of time.   And that no matter what is being said and which fingers are being pointed we are all actually the same.   We have the same love of running, the same love of the mountains or the desert, of the dirt, the rivers, the pain, suffering, and ultimately the elation of doing something that isn’t supposed to be done.   So maybe we aren’t just the 99%, maybe together, knowing that really we are all the same, we are something more.   With raised fist we may actually all stand together and scream –