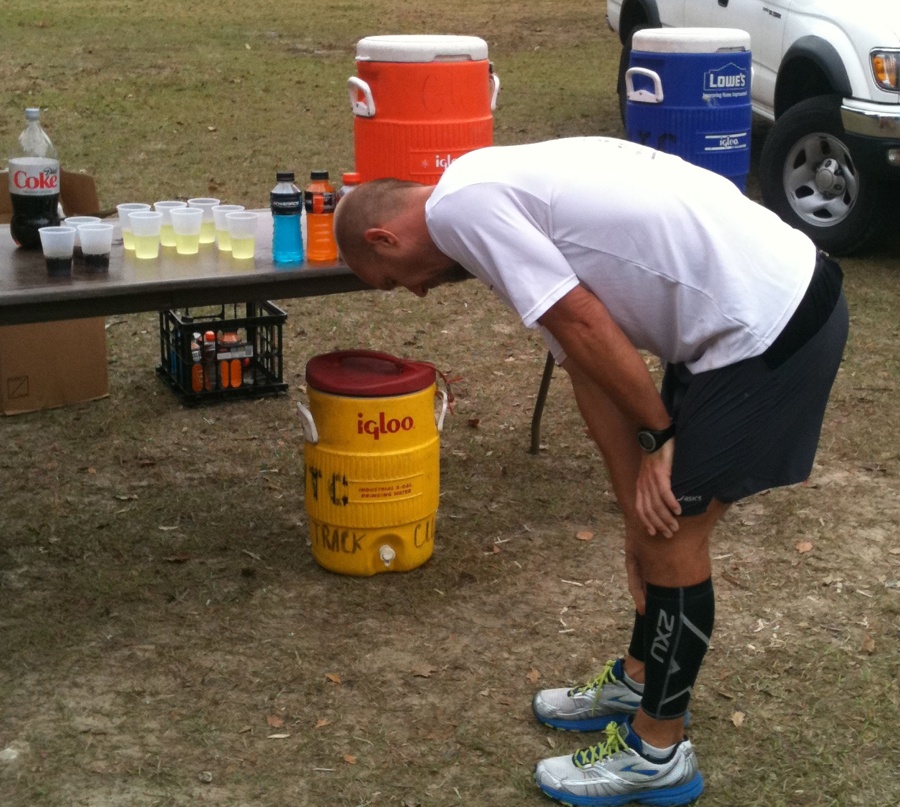 I couldn’t wait to be back in Tallahassee.  Not only the Capitol of Florida but the home of my college alma mater, Florida State University (FSU).

And it was great to be back; the couple of days touring campus and wandering around my old stomping grounds were fantastic .  The night before the race we headed down to Wakulla Springs State Park, the site for the Tallahassee Ultra.

The morning was brisk but not cold with overcast skies.  The temps never got above the low 60’s;  a perfect day for a run.  After a fine pep talk by race director Gary Griffin, folks were walked to their respective start lines and the race started.

The loops were really double out and backs in a T design.  All the running was done on asphalt and the roads were closed to traffic.  This is a place to run fast, as you’ll read below.

There were 2 aid stations with ample supplies and a good mix of foods.  The moral support at the start / finish was stellar.  The volunteers got to know your name and would encourage you every time by.  At the end of the race Gary came over and said, “Good work Mark”.  Not many race directors get to know your name.  And personally, I love the word “work” because that is my view of ultra running.  I may never win a race but I can work hard and Gary said it right.

One of the most notable performances of the day came from Pete Kaplan of Charlotte, NC.  He set a new US age group record (55-59) of 3:39:47.  He was the model of consistency and it paid off for him against younger runners who led the initial parts of the race.  Finishing second was Dan Mosier of Tallahassee (4:07) and third was Andy Roberts also of Tallahassee (4:08).  There was another US age group record set by Joe Burgasser of St. Petersburg, Fl; Joe ran an amazing 4:16 in the 70-74 age group.  Simply unreal.  On the women’s side of the 50k Kristin Cox, first female, finished fourth overall in 4:14.  Kathryn Schuber of Gainesville was second (4:27).

In the 50 mile race, Sung Ho Choi ran like a mad man with Jack McDermott in close pursuit the whole time.  Sung finished in 6:18 while Jack finished in second with a time of 6:27.  This was my first time seeing Sung race but would not be my last.  I also ran across (pardon the pun) him at the Long Haul 100 in Tampa 5 weeks later.  The guy seems to cover just about every race in the South.  Amy Costa was third overall, finishing in 7:39:09.  As Gary describes her in his race report, “Amy Costa, the picture of  strength and grace for hours on end,”.  I couldn’t agree more.  She’s looks like one tough cookie.

Thanks to Gary, Peggy and all the volunteers who helped put on the race.  It made the trip back to Tally even sweeter.

One Response to Tallahassee Ultra Marathon