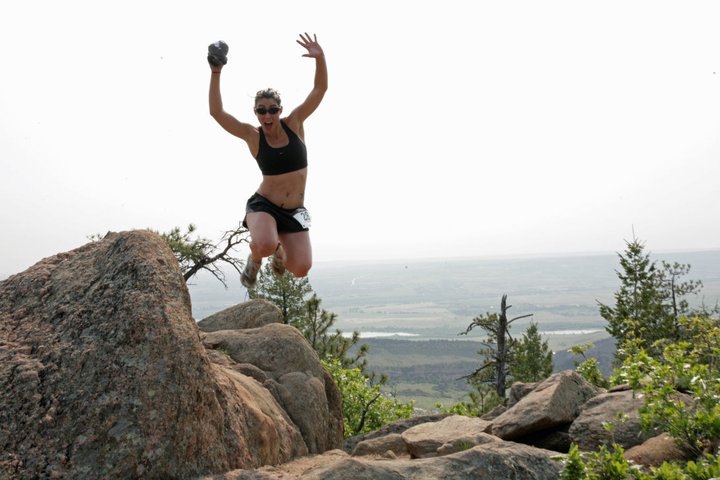 Clouds hung on the mountains as we drove to the trailhead; the foothills of Colorado magically transformed into the Costa Rican rain forest.  The storm front that settled on the state in the past 48hrs provided ideal 40-degree temps; Race Directors Lauren and Scott Jones couldn’t have asked for better weather. 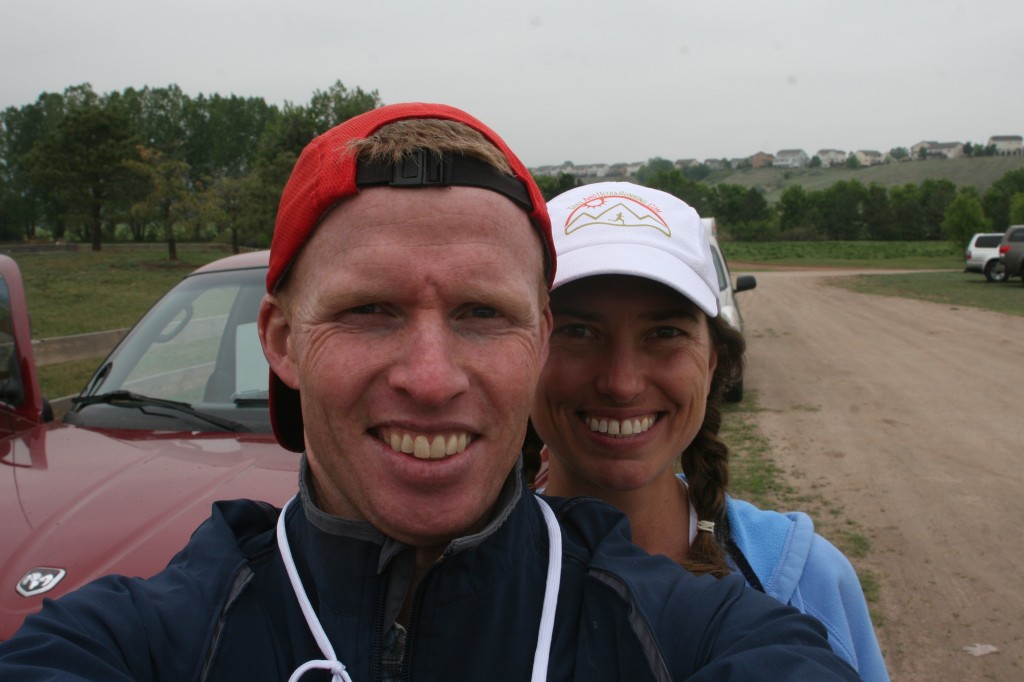 After picking up race bibs and bright yellow tech shirts from Lauren, Jerry and I piled into my car and headed into the canyon.  I missed the initial turn onto Grizzly Road but no matter; we happened upon a herd of deer and took it for an auspicious sign.  The deer were scared.  Time to run the “Fear the Deer Trail Half Marathon”!

At the start line, Scott Jones gave the requisite speech to the 80 runners standing under the Start Line banner.   There was some general shivering and chuckling when he talked about the elevation gain in the first three miles.  Then with very little fanfare, he called “Ready… Set… GO!”

The trail began on a fabulous incline for the first couple miles.  The previous night’s rain and the standing clouds created wet conditions and droplets sat motionless on leafy foliage and wildflowers.

The frontrunners powered up the hill and the rest of the pack seamlessly fell into the beauty all around. A colorful train of happy runners powered up the mountain in a single track state of mind. The ground was soft and spongy; rocks littered the trail, making for some sweet high-stepping moments interspersed with downhill flight on the descents.

Two out-and-back sections gave runners a chance to see more of the area, though clouds blocked the view of the lower valleys.  Runners were full of smiles and called “Good job!” or “Way to go!” or “Looking good!” to each other as they passed on the way in or out of the lookout points.  The day was surreal, as if we were running inside a cozy comforter far, far away from the rest of the world. Disconnected from time, the experience was slow motion…we had stepped inside a perfect painting. 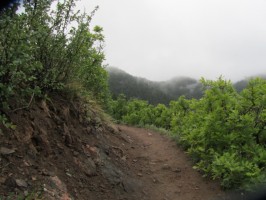 The course is noteworthy for its proximity to urban areas.  Several people mentioned they had been on the trails before; one man said he runs this trail once a week though this was his first year participating in the race.  Local runners Philippe Marquis, Walker Secker, and Caitlin Howard traveled less than a hour; Australian Dave Robertson with The Naked Runners flashed miles of smiles and said he was redeeming himself after the Colorado altitude kicked his butt on a mountain run last week.

The aid stations volunteers were the best.  Bundled up in winter coats, gloves and knit hats, they cheered as runners came blazing through.  The cowbells and clapping kept the mood festive and all that feel-good excitement on a beautiful Saturday morning contributed to the magic of the day.

Eric Garber was the overall first place finisher, crossing the line in a new course record of 1:35.  Kate Kenoyer was the first woman to finish with a time of 1:57.  They both received deer antlers, and as the tradition dictates,  each must return next year to defend their titles.

The race is capped at 120 participants due to the nature of the course.  The race is well priced, has a fabulous venue, great race directors who understand the idiosyncrasies of the terrain, and is destined to become a hidden gem in the trail running world.

2 Responses to Fear the Deer Half Marathon 2012: Race Report