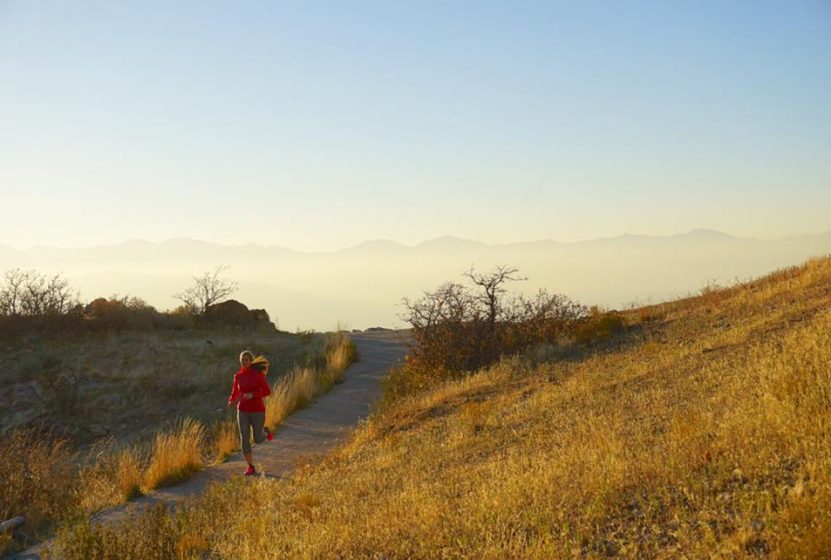 The women’s Mazama is Brooks’ lightest and fastest running shoe. With a 6mm drop it fits right in that sweet spot of lower profile and plenty of support. At 7.9oz they barely feel like they are on your feet. The protection under foot is solid, but with a lighter tread they are able to be worn on the pavement, if needed. Brooks claims these are their new flagship shoe in the trail line.

I wore the shoes on both trails and road and found that they were very comfortable. I liked that they held my heel stable without feeling bulky or too tight. The midpoint of the shoe was a little roomier than I am used to or would have liked, but the forefoot was snug, so it held everything in place well. I liked that they were light on my feet and nimble on the trails. I didn’t run a lot of technical stuff, however, so I can’t speak to how they would do on really tough trails. Overall I loved the look and feel and think they make a great additional to my shoe rotation.

Brooks’ lightest jacket, the LSD, is a windproof and water resistant upper meant to protect from sub-perfect conditions. It packs into itself, making it easy to stow and available when needed. With a semi-fitted shape it is able to be worn over multiple layers and capable providing a slight bit of insulation as it doesn’t breath super well (which is why it is water resistant). It’s primary purpose is simply to keep the brisk wind out, which it does well.

As a wind breaker, the LSD jacket certainly did it’s job. It is also very stylish and I liked how the jacket matched my shoes. However, it also felt like I was wearing a plastic tablecloth as I think it’s probably a similar material. And even after several runs it never really loosened up. I will say though, because it was so light, it did move with my running form very well. As a taller runner I found that it ran a little short. It was fine in the sleeves and around the chest, but it barely made it down to my waist, which was a little odd. It could also use some smallish pockets (other than the one on the back) on the front or sides.

Brooks says “Our Greenlight capris fit so well, they’ll be instant favorites”, and they might just be right. With a flat, power waistband that slims and stays put while moving, there is no need for a drawcord, something that is frequently uncomfortable. The flatlock seams make for non-existent chafing or discomfort and the ruched side hem is meant to hold around the leg, just above the ankle.

I love these tights. They are incredibly comfortable and much lighter than how they feel before you put them on. The waist band is thick (probably 3 inches) which makes it super comfortable and rides well around my mid-section. I also really liked the ruffles as they gathered around the bottom of the capri length bottoms. It makes it so they aren’t too tight and they ride really well. There are several deep pockets in the waistband, which can hold keys, gels, or feminine products, which is really nice to have. I’ve worn several other brands that have waistband pockets and they are never deep enough. These were. Overall, my new favorite tights.