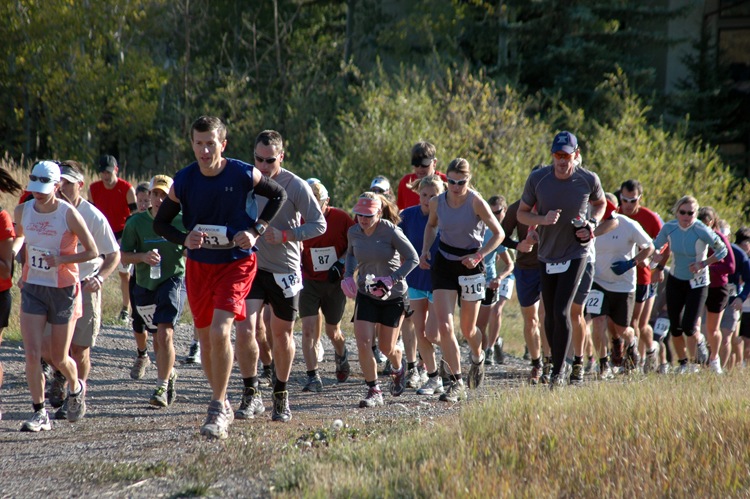 The Goldenleaf Half Marathon is high on a Colorado trail runner’s bucket list.  It comes at the end of the season and runners get to see Aspen in all its autumnal glory.  Trail Runner Magazine voted the Goldenleaf Half “One of America’s 14 Most Scenic Races”, catapaulting this iconic race into national awareness.

Many people get a group of friends together and head to the mountains for a weekend get-away.  It’s close enough to the Front Range for runners to make a day out of it, but really, why rush?

A group of girlfriends are headed to Aspen in two weeks.  This will be the first time I’ve been able to join the fun on the mountain and I was excited to catch up with Bob and hear the inside scoop on what makes this race unique to Colorado.

LARA:  How many years has this race been in existence?

BOB: This will be the 34th running because we canceled one year due to a foot of snow. I count that as 35 because it was so much work to set the course and break it down in the snow!

LARA:  How many people are registered vs typically starting the race?

BOB: We get a thousand registrants and usually end up with 800ish runners, which is a shame really. We let folks transfer their registrations, unlike many races, but some don’t go to the trouble.

BOB: Gain is 1,975′ and loss is 2,688′. The high point of the course is reached at the first aid station at 1.75 miles. It rolls through the Snowmass ski area with lots of short and steep hill bursts. But it trends down until 5.5 miles and then climbs to almost as high as Snowmass’s high point at 6.5 miles. It rolls slightly down to 8.5 miles where it drops more precipitously until just past 11 miles. From there it is fairly flat into town on pretty dead legs. This section is often the most challenging part of the run!

LARA:  A lot of people go into this race with previous trail running experience.  Word on the street has it that this race is more difficult than other Half’s.  Can you discuss why this might be?

BOB: I am surprised that you heard that. But it is good for me to hear people’s perceptions of the course difficulty. It certainly is easier than Imogene. The first climb to the aid station at 1.75 miles is a grunt, pure and simple. It is great that we have waves and that people are on a ski area road to this point to get everyone “sorted” before the single track. The rolling terrain from 1.75 to 8.5 miles is a joy for me, especially when the aspens are going off gold. The course has gotten rockier over the years because it’s a popular hiking and mountain biking trail- so it is important not to do too much sightseeing! We’ve seen lots of sprained ankles over the years! The steep downhill from 8.5- 11 is hard for some because it is steep enough to require some resistance on tired quads. And, as I said, the homestretch is just enough rolling on tired legs while generally being warmer/lower that it is a mental challenge. But it is an absolutely beautiful entry into town with very little pavement.

LARA:  What are some of the “selling” points of this race for locals and out-of-state runners?

BOB: Because the trail gets you up high quickly and then rolls as it traverses from Snowmass to Aspen, it gives grand views of the Roaring Fork valley and portions of the Elk range. And at this time of the year the trees and understory are so beautiful- it sets us apart from the other mountains runs that take place in the summertime. Over the years we have gotten pretty darn fast with our race results and we view the racers as our “guests”, trying to give them the best experience for their $. Our raffle list is unrivaled. We give more and better prizes than any other race in the state. And finally, we feed the racer lunch after their efforts! We aim to please…

LARA:  What are the things that you have been concerned about for this year’s race?  And, are there any tweaks that have been made to the 2012 race that will help with the course?

BOB: We are always concerned about the safety of the runners first and foremost. So we have three aid stations. My daughter and I run in the middle of the pack with first aid supplies and a Sat phone. Mountain Rescue has folks at aid stations and following the racers. They also set up a first aid station at the finish for patching people up and evaluating injuries. The course has changed in minor ways over the years, so I had to remeasure the course this year as last year’s mileage markers were a bit off. So mileages will be more indicative of reality this year, but in the end it is a backcountry race and racers have to cover the distance. The course really measures out at 13.4 miles as a result of changes. I always recommend that racers bring a water bottle and a gel just in case… Our middle aid station we carry all the water in on our backs so if on a hot day it ran out for later racers, well with a little of their own water they are covered. Racers can get a ride off the course at mile four and 10.6. Certainly with larger injuries we can get folks off the course from any point.

LARA:  How is the course looking this year?  It’s been a drought season in CO; has Aspen been hit pretty hard?

LARA:  Do you recommend running with a camera?

BOB: If you are not overly concerned about time it is leaf peeping time all over the Rockies!

LARA:  How many Aid Stations will be on the course?

BOB: Three and a heck of a feed at the finish.

LARA:  What are some of the little-known facts around the Goldenleaf Half Marathon that make this completely unique and a “destination race” year after year?

BOB: I think that most find us friendly. Beauty and course challenge are always important, but in the end it is about having fun with the people around you. We try to facilitate that. Some are surprised that we are so down to earth here in glitzville.