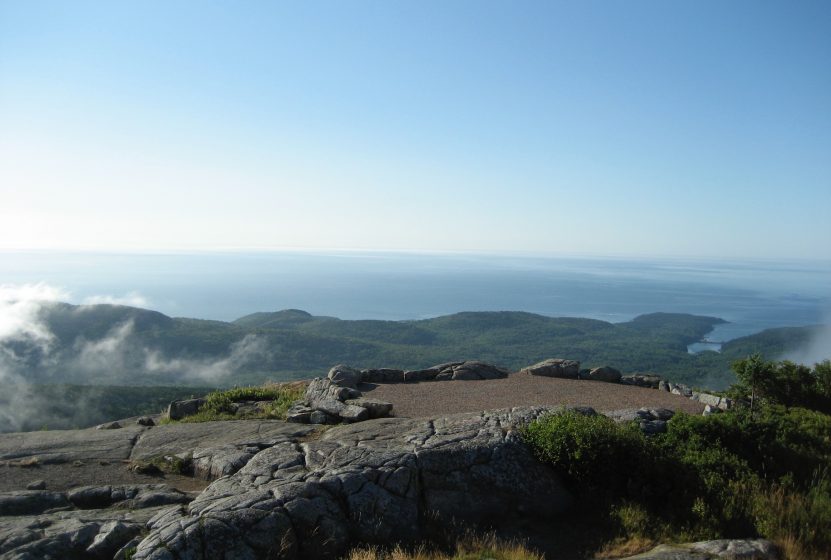 Living in the West, when folks talk about vacations to National Parks, I hear the standard Yellowstone, Tetons, Zion, Arches and Canyonlands. All beautiful to be sure, and full of great trails and places to see. But for me and my family, our summer National Park of choice is a little different. We head to Acadia National Park on the coast of Maine. 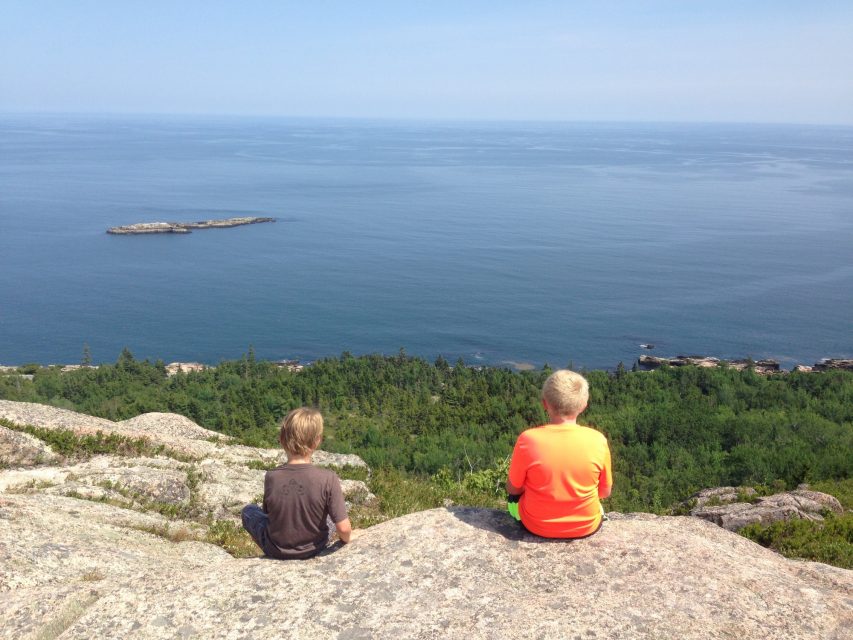 Acadia was first established as Sieur de Monts National Monument in July 1916 by President Woodrow Wilson but then was changed to Lafayette National Park in February 1919 when it became the first national park east of the Mississippi. It was not until January 1929 that it officially was named Acadia National Park. Today, it encompasses approximately 47,000 acres in three main areas. The largest is located on Mount Desert Island.

George B. Dorr and Charles W. Eliot anticipated the dangers that over-development would bring to this coastal wonderland and acted quickly to prevent it by donating substantial amounts of land and through advocacy at the state and federal levels. In addition, John D. Rockefeller, Jr., played a critical role by building over 50 miles of the now famous carriage roads (1915 – 1933), and by donating over 11,000 acres of land. 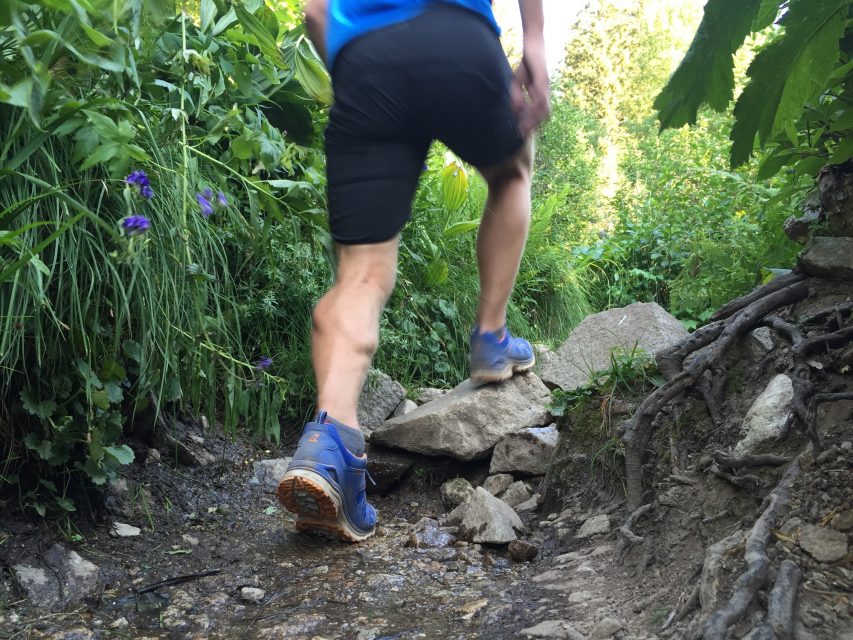 In addition to the carriage roads, 125 miles of hiking trails have been established. They offer something for everyone, ranging from easy strolls along the shore, to strenuous hikes to the top of glacier-scoured granite peaks.

Here are a few of my family’s favorites:

At 1,530 feet, Cadillac is the tallest mountain on Mount Desert Island and the highest point along the North Atlantic seaboard. From October 7 through March 6 of each year, it is the first place to view a sunrise in the United States.  There are numerous trails to get to the top, but our favorite is the North Ridge Trail.  At 2.2 miles one way, my kids have been doing this since they were just a few years old. After leaving the Park Loop Road, it scrambles up over rock slabs and through groves of stunted pine trees. 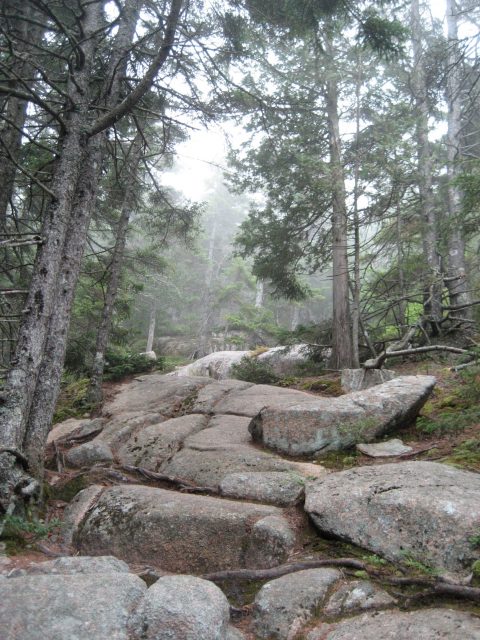 The trail up Cadillac Mountain

After breaking out into the open for a short while, the trail climbs moderately but steadily with views that get better with each step upward. The trail stays just east of the Cadillac Mountain Summit Road as it winds its way toward the top. Once on the summit, the views of Frenchman Bay to the North and Cranberry Islands to the East are spectacular, as are the ice cream cones in the gift shop. 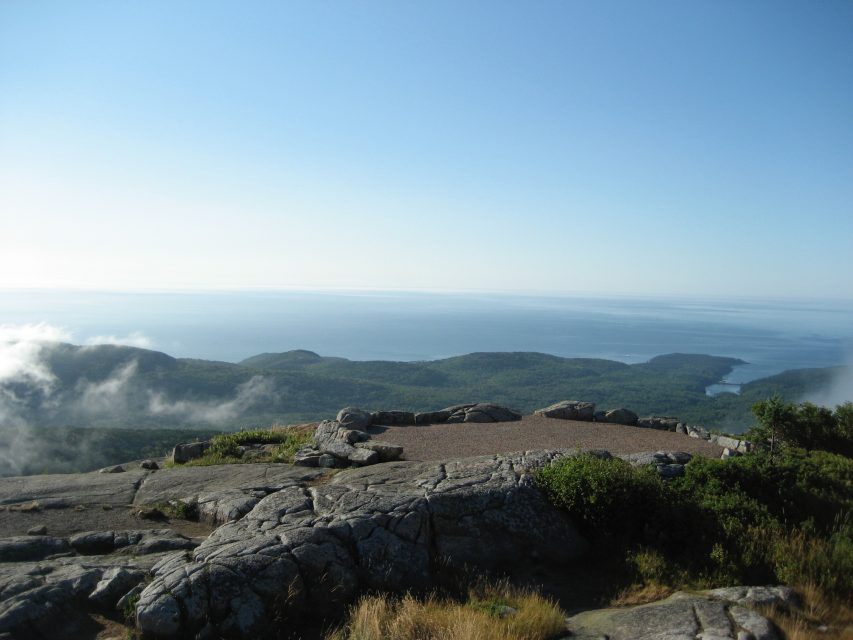 View from the summit of Cadillac

Getting back down is easy, you can hitch a ride, or you can take one of the many other trails back down the mountain.  We do it both ways, depending on the age of the kids, the weather and their general disposition. I’ve had a fun time looping many of the trails together, easily putting together a 10-15 mile tour of the whole mountain 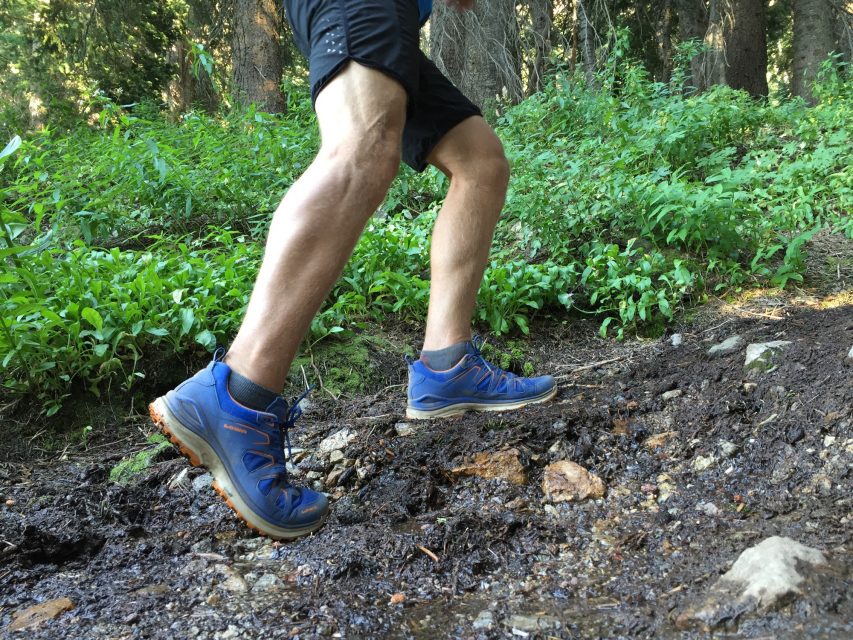 The is the most challenging and well known hiking trail in Acadia National Park with an exposed and almost vertical 1,000 foot climb that’s only recommended for physically fit and experienced hikers with no fear of heights. At least that’s the recommendation. Somehow a family of 6 with kids aged 12 to 1 managed to make it to the top. 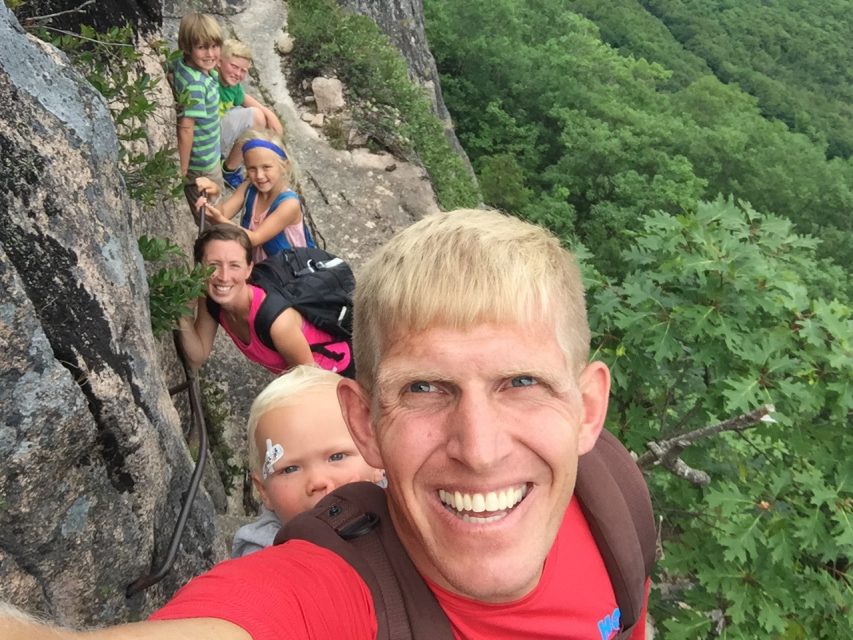 All smiles on the Precipice Trail

The kids were in heaven scrambling through numerous boulder fields, traversing ledges with vertical drop offs, and using iron rungs and ladders to scale exposed cliffs. 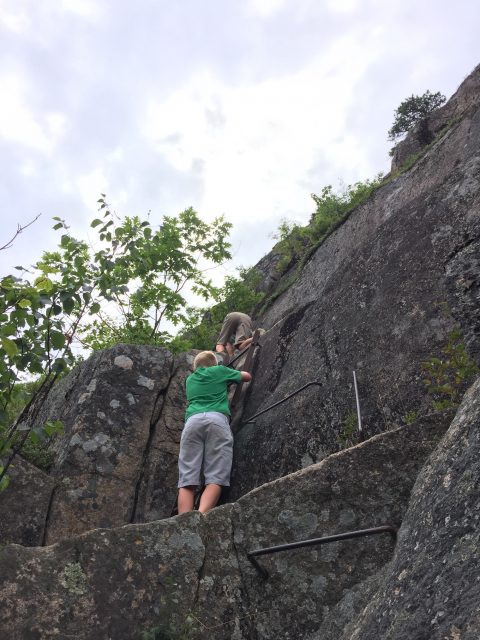 It is sometimes closed late spring through mid-August due to returning and endangered peregrine falcons.  We attempted this trail for the first time this summer, and everyone immediately voted it to the top of the list of favorite hikes.

Another favorite, that has to be done every summer!  Jordan Pond is a glacier formed tarn with a maximum water depth of 150 feet. There are steep inclines on the left and right sides (West and East). The water is exceptionally clear with an average visibility depth of 46 feet.  This 4 mile loop is an easy hike with a combination of smooth single track, uneven granite boulders and lots of log plank boardwalk. 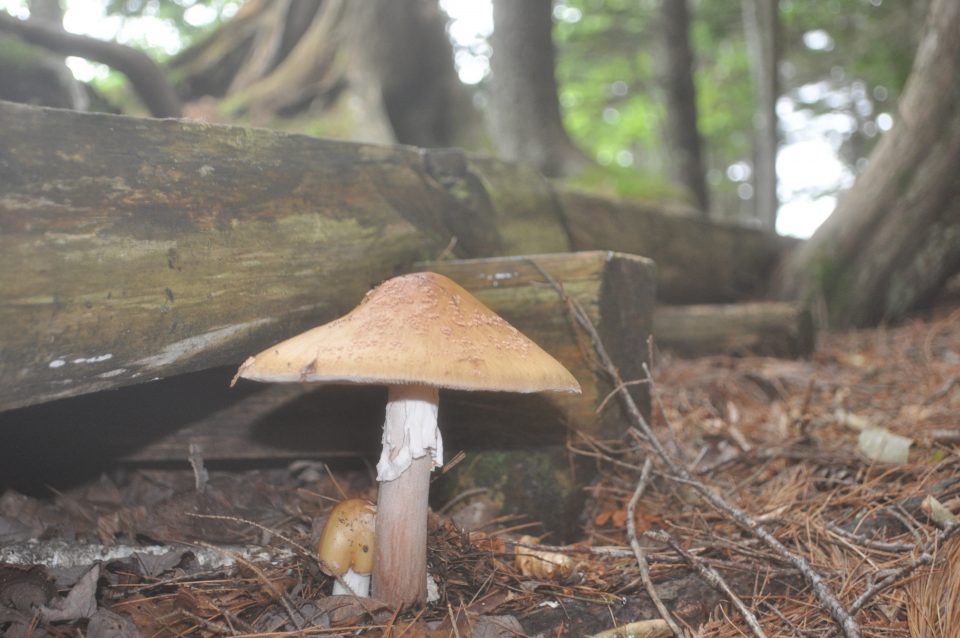 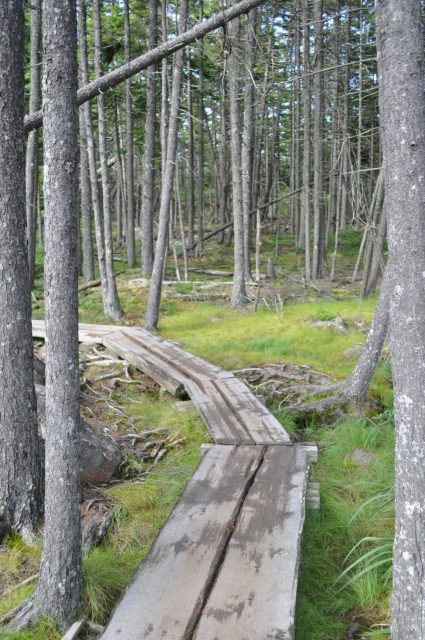 In July and August, there is an abundance of wild flowers, and you can always find a spot or two to sit down and pick a few wild blueberries.

At the end of the hike, our kids favorite thing, sometimes the only thing that keeps them going during the hike, is to stop at Jordan Pond House for one of their famous Popovers, smeared with butter and strawberry jam.

In addition to all the great family hikes we’ve been on, Acadia has miles and miles of running available from technical single track to the beautiful carriage roads that criss-cross the park.  I’ve spent many hours visiting some of the lesser known corners of the park and can’t wait to get back and explore some more.  If you are ever even remotely close to Mt Desert Island and Acadia National Park, it will be well worth your to pay it a visit.

I have been using the Honey Stingers products on most of my shorter routes. With the options of Gels, Chews and Waffles, Honey Stinger makes some delicious and wonderful options for long runs. I was honestly a little bummed that I abbreviated my longer FKT simply for the excuse to enjoy all of the Honey Stingers.

A Huge thanks goes out to Honey Stinger for all the delicious waffles, Bars, Chews and Gels. Not only do we love them, but our kids do to. 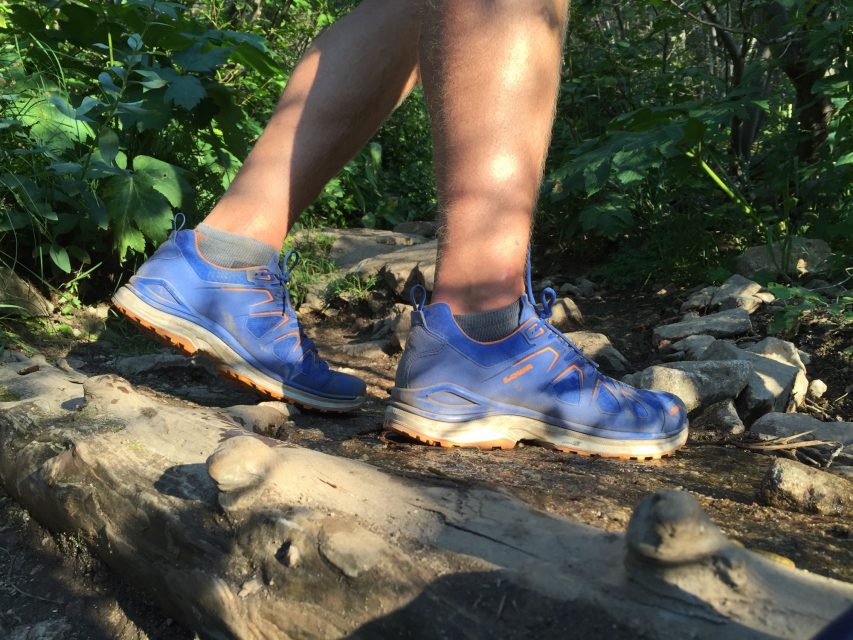