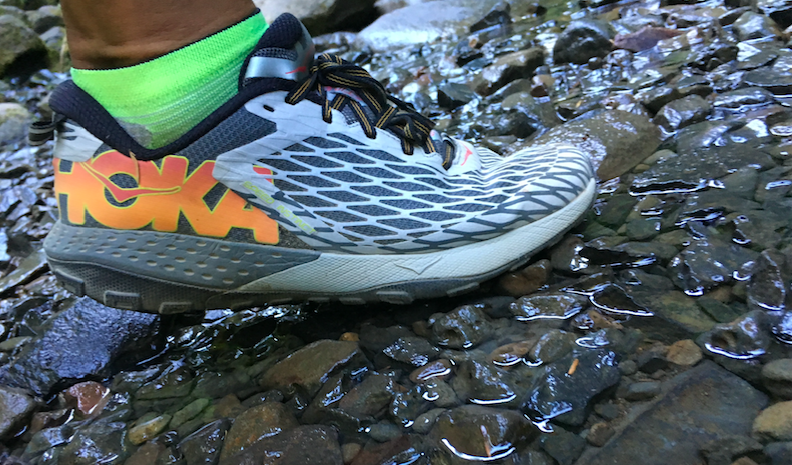 The Hoka Speed Instinct is a neutral trail shoe, the Speed Instinct feels lightweight, cushioned, but still provides plenty of trail feel. The mid- and forefoot cushioning is firmer than the heel cushioning, which feels natural on the trail. The shoes features a reinforced upper in the toe area, especially over the big toe, and the meshy, seamless upper is strengthened by a diamond-shaped grid overlay. The tongue is cushioned, but not overly so, and the lacing allows for a variety of snugness around the top of the foot to compliment the moderate cushioning around the ankle and heel. A contoured insole decreases foot slippage inside the shoe, and is over a firm last that doesn’t depress with pressure, further protecting the foot from sharp rocks. The PRO2LITE +10 cushioning is overlaid with a rubber, diamond-shaped overlay with multi-directional lugs and wrapping up over the edges of the cushioning especially in the heel, forefoot, and big toe to protect the shoe itself and give increased traction. With 20mm of cushioning and 3mm heel offset, the shoe feels built for some quick trail action.

When we first put them on, we noticed the soft, cushiony feeling right away that we’ve noticed with the Bondi B, but without all of the bulk of the Mafate. The softer heel cushion material almost made the shoe feel like the heel was equal to the forefoot, or maybe even a little lower. We were surprised that it had even a 3mm drop. Initially the shoe fit similar to the Speedgoat, a bit narrow and long. However, once on the trail, we didn’t notice any differential or lack of it. One tester immediately took it up a mountain peak with over 4000’ of gain and loss, and lots of big, sharp rocks along the peak. The Speed Instinct protected their feet from the big, sharp ridge rocks like we would expect a Hoka shoe to do, but they felt fast and light on their feet on all of the running parts.

The lacing and 3d printed upper allowed our foot to breathe, but not slip around even on the steep downhill parts. More than anything, we felt the lack of bulk that we normally associate with Hoka shoes. It’s tough to match cushion, protection, and trail feel, but we felt these shoes did so very well. Also, whereas some folks have regularly experienced blisters due to the narrow fit of Hokas, the Speed Instinct, like the Speedgoat, almost grew in width.

Ultimately, the shoe is lightweight and feels streamlined without sacrificing Hoka cushioning. We were very happy with the room in the toe box. The upper doesn’t produce any blister-causing pressure points, nor does the interior. The shoe is touted as having a rocker, but we didn’t feel or notice it in any annoying way. We liked having a more muted color option in this model (Grey/Corsican blue and Metallic Silver/Cayenne), because it hides the dirt well. Also, although the upper is breathable, we haven’t noticed the powdery clay soil our testers often run on seeping into my shoes and socks, which is nice. As for weaknesses, the exposed PRO2LITE +10 areas on the bottom of the shoes do show very small signs of separation, but hasn’t affected the shoe’s performance in any way. The Speed Instinct outsole was also great in many conditions, but in wet conditions the traction was less then desired, almost nonexistent. Lastly, the upper has begun to wear after 200 plus miles on one testers shoes, a problem we have seen in other Hoka models.

For the price and weight, Hoka has brought a solid shoe to the market. We will continue to pick this shoe for our runs, and so should you.