US Outdoor Retailers Show – Day One

Without any forethought or calling each other to coordinate outfits, three Trail And Ultra Running writers wore Montrail Bajadas this spring as their trail shoe of choice.   Each of them loved the shoe out of the box but was sorely disappointed in how fast the shoe fell apart.

With 200 miles on my first pair of Montrail Bajadas I’m ready to pitch these shoes. They’re dead.

While I’ve enjoyed the Bajadas in terms of weight, trail stability and grip, I’m frustrated that they only held up for 150 miles.  I started referring to Montrails as “MoneyTrails” about 50 miles ago; I leave a lot of cash on the trail every time I run.  My 200 miles of use comes purely from the fact that I can’t afford new shoes every 2.5 weeks.  At 2 pairs per month ($120 includes tax) we’re talking $240 per month and upwards of $2800 per year.  These shoes break down too fast and are too expensive for the amount of wear they provide. 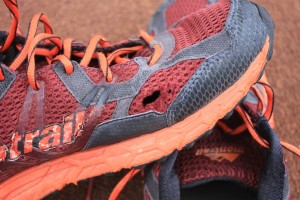 Overall Design 4 out of 5

The fit and feel are really nice.  They’re not super snug or form fitting and are soft enough on the inside to wear without socks.  The toe box is wide enough for the toes to move around on the hills and descents.  The tongue doesn’t have a gusset and it loves to fall to the outside of the shoe.  This is a minor irritation because the top of the foot gets exposed in places, allowing trail dust and small rocks to work their way into the shoe.  I like the manufacturer’s insert; it’s one of the better one’s I’ve gotten in a trail shoe and I’m pleased that the laces actually remain tied.

The Bajadas are relatively light but still heavier than my former Rogue Racers.  I moved up to the Bajadas in hopes of a longer lasting lug and actually wanted less of a minimalist shoe that offered more protection on the trail.  The Bajadas accomplished this so the weight is acceptable.

Construction and Durability – 2 out of 5

There are 3 failure areas with this shoe.

While I’ve enjoyed the stability of the Montrail Bajadas I can’t feel the trail as intimately as I could with the Rogue Racers.  The downside to this is that I’ve rolled ankles more often in this shoe and am now worried about injury and soft-tissue damage in the ankles.

Next up for me: the Saucony Peregrine. 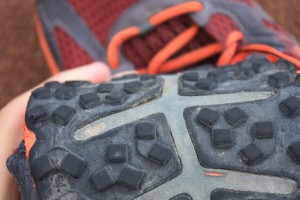 The Montrail Bajada’s felt like they were custom-made for me right out of the box. They’re light and seem to lift off the ground with little effort even at 12.65 ounces for my size 13. I was so happy with the traction and feel that I almost went out and bought two more pairs to have on hand for 50 & 100-mile races.

I had my fastest descending times in this shoe. The tread sticks! The shoe breathes really well and because of that, my feet are always filthy with trail dust after I run.

Con: The shoes changed abruptly after about 125 miles. It was dramatic. Suddenly the shoes felt dead and my arches were getting sore on 7-mile trail runs. These should be $70 shoes and not $110. They’re a total rip-off for the quick breakdown. I am also surprised that there is no gusset for the tongue; what trail shoe manufacturer doesn’t plan for foot movement and tongue displacement? The tongue is also not big enough to cover the foot inside the shoe; I can see my sock between laces when I flex my foot. It’s inviting debris to come into the shoe.

Next up for me: Nike Pegasus Trail.  250 miles of racing can’t be wrong! 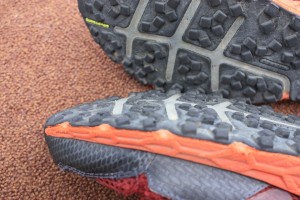 I traded out my Mizuno Wave Ascend’s for the Montrail Bajada’s about 170 miles ago.  I was headed into the Desert R.A.T.S. 25M trail race in Fruita, CO and wanted something much lighter than the Mizuno’s.  The Bajada’s are a neutral shoe; I was initially wary because my right foot tends to pronate and I’ve always needed the stability of a heavier shoe.  A seasoned trail runner at the Boulder Running Company insisted that the Montrail Bajada’s would work just fine as long as I traded out the factory insert for the pink SuperFeet insert.

I immediately loved the Bajada’s.  They were light and airy.  The toe box was roomy enough to accommodate swelling.  Because I raced in them right of out of the box the lugs were tight and traction on the hills and descents was perfect.

I ended up racing a road marathon in these right around 120 miles on the shoe, which was the beginning of the end of their useful life.  Since that race the arch of my pronating foot has begun to hurt more and more and the spring in the sole has disappeared.

Overall Design 4 out of 5

The design is good for a neutral shoe and didn’t have anything to rub or chaff against.  The toe box is wide enough for a trail runner and I love that but I’m baffled by the lack of a gusset on the tongue.  I want these bad boys riveted to my feet and anything that flops around will cause irritation and wear in the shoe and my foot.

Going from a stability shoe to the Bajada felt like wearing nothing at all.

The first 120 miles were glorious.  The upper is still in good shape but the lugs have lost their functionality and are now too short and floppy to provide much traction and support on the trail.

I got less than half the wear out of these $110 shoes than I’ve gotten out of any other pair of trail shoes I’ve owned.  There’s no way I can afford these again, given a shelf life of 150 miles.

Next up for me: Brooks Cascadia Trail Shoes.

Our three ultra runners/writers had consensus in how fast the lugs deteriorated and how the shoe lost traction and stability between 100-125 miles.  There’s agreement that the shoe is overpriced for the value and none of them will buy the Montrail Bajada again even though out of the box, they all loved the shoe.

* Calls and email to Montrail were not returned as of the time of publication of this review.