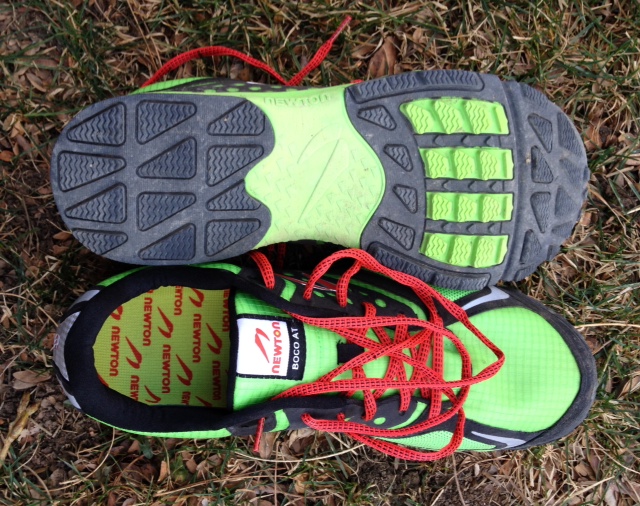 Newton is well known in the triathlon world. Craig Alexander has been running down the competition in his light, fast and of course – COLORFUL Newtons for years. Most of us in the ultra world are not that familiar with the Newton line. That will change now that Newton has the BOCO AT in their line.

The BOCO AT is a big jump for Newton. A true trail shoe aimed at taking on Leadville is a big goal for any company. I was excited to pick up a pair provided by Newton for my testing. Having run numerous ultras and my legendary (around my friends and training partners) reputation as a diva of trail shoes these shoes had more than Leadville to worry about.

Total transparency: I am a big fan of Newton. I’ve been running in a pair of Newton Energy’s for a couple of months now. And…being a Boulder, CO company I was all in for drinking the Kool-Aid. My Newton Energy shoes fit like slippers, are very light, and breathe like sandals. I even got into the bright colors. I was even using the road shoe on the trails because I just could not bring myself to take them off.

So with a fresh pair of BOCO’s in my hands, I excitedly made my way to the testing grounds near my house.

I run in the cushioned Darn Tough sock all the time. This allows me to test from shoe to shoe with good accuracy on fit and feel without being thrown by some thin sock or odd foot fingered experiment. I slipped on my BOCO and was shocked to find a roomy toe box. It’s roomy in width and height. For a guy with 2-3 toenails at any given week, I hoped this might be a blessing. Cinching up the laces, there was some puckering of the material where the toe box meets the laces. Not a big deal; I had some of that with the Patagonia EVERlongs and they are my favorite trail shoes of all time.

Once settled in, I was concerned as to the high heel cuff. I could feel it resting against my anklebone. I gave the shoe some warm up kicks and strides to get settled. There is a beefy toe guard up front with some traction lugs. I was also testing to see if I could tell the difference between the 4-lugs on the bottom of the trail shoe and the 5-lugs I had been running on in the road shoe (Energy). I did not notice a difference. This may be due in part to the extra side rails outside of the lugs stabilizing the shoe. Being pigeon toed, I was rolling off the lugs in my other Newton shoes due to them irritating my m. peroneus longus. I am an odd case, so keep that in mind. I stopped and tightened the shoe up one more time, because I felt that there was too much wiggle room up front. Luckily the tongue is well padded so tightening up did not cause distress on the top of my long paddles. 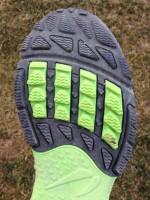 Off I went on my multi-conditioned 3-mile loop for shoe testing. Starting out on the twisty flats I noticed the BOCO likes to bite at the ground. Running forward was rock solid and predictable. The next phase was the uphill grind on steep loose sand/rock. As I predicted by the tread design, this shoe is a grabber and just kept propelling me forward. Towards the top of the climb, it was really loose and steep and I usually have footing issues at that point. Today was different. The BOCO tread is tacky and the roll over to the toe gives just that little extra. I was very satisfied and thought back to my scramble up Rabbit Ears at Steamboat wishing I had these for that insane climb where I was using my hands to help get to the top.

Back to the flats, I was still feeling the contact to my anklebone. I kept running knowing a new shoe is going to need some breaking in. I was heading for the twisty and fast downhill section. During the descent, I noticed the shoe was driving me. When I went to turn, the shoe would fight me a little and then turn. I was visualizing my foot turning and the shoe staying on course eventually giving in and changing direction.  This may have a little to due with the super sturdy construction of the shoe and the fact it fits a little loose on me. During this downhill I was wishing this shoe fit like my Newton Energy shoes. The width and height of the forefoot was becoming an issue for me.

I don’t know Newton’s thoughts on the roomy toe box. Some companies like to give some extra room up front for when the runner’s feet begin to swell as the miles approach 50 and beyond. My feet don’t get fat on long runs or during 100 milers. So this extra room is never going to help me. 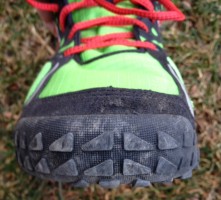 I made it back to my truck and inserted a 2mm heel lift. The Newton BOCO’s are a 3mm drop shoe. I am a 4-8mm drop runner. I figured the extra 2mm lift would get me to 5mm and I might be able to avoid the heel rub.

That worked for the rub and I was off and running another loop. I was taking the knowledge from my first lap and applying it to the second lap. The BOCO’s are like my truck: they are rugged, big and roll when you get up to speed. There is no finessing these shoes. Now that’s not a bad thing. They are built for the worst conditions and proud of it. The upper material is made to repel water and the closed mesh blocks out the dirt and debris. Just like my truck, they have a bumper up front to protect me from the harsh conditions.

As I was stuck in my truck analogy, I carried it to the outersole and compared the beefy lugs and traction to my big tires that roll over everything (small cars included). I was beginning to see these shoes in a different light. They are workhorses! They are thirsty for going “4-wheeling” and would rather be covered in mud than clean and parked in a garage.

I love my truck and, with a few tweaks, I think Newton with have a shoe I can love too. They put every trick into these dirt sleds and that is to be appreciated. Shoes are going to fit everyone differently. Personally, there is just too much room in the toe box for my liking. It leads to sloppy steering and I just don’t feel like the shoe and I are one. I would also like to see a lower heel cuff. I love the tread pattern and the stability of the extra side rails in the forefoot. Halfway through writing my review, Boulder was pounded with snow and I grabbed my Bocos and headed out the door. The BOCO’s were laughing off the snow and ice much like my Ford F-150.

High tech shoes with all the whistles and bells frighten me when I look for the price tag. Relax…the Newton BOCO AT’s come in at $129.00! I was expecting more of a $180 sticker shock. Thank you Newton for understanding that we ultra folks will buy multiple pairs of the same shoe for the Leadville’s and Western States on our schedule.

A+ for effort; B- for execution.

For more information and a breakdown of the technology in the Newton BOCO AT: http://www.newtonrunning.com/shop/boco-at/

One Response to Newton BOCO AT