Editor’s Note: This is the first in a series of articles related to trail running after the flood that devastated the Boulder, Colorado area during the week of September 12.  Boulder received over 28 inches of rainfall during an 8-day period, equivalent to its annual rainfall.  In the wake of the flooding Boulder-based contributor Lara Robinson is covering trail repairs, running and racing after the flood, the politics behind the trail system clean-up, and other topics related to trail running after a natural disaster.

T he September storm that dropped a year’s worth of rain in eight days on Boulder County has receded.  Skies are cloudless and trees are turning spectacular colors due to the nip of October frost that’s gradually appeared.

Homes are slowly being repaired.  Piles of sodden drywall, insulation, furniture, carpet, mementos, clothes, baby toys and other worldly treasures hauled to parking lots that doubled as dumping sites are gradually making their way to the landfill.  Remnants of items that didn’t make it outside during the initial cleanup of flooded homes dot curbsides, waiting for the weekly trash pickup. 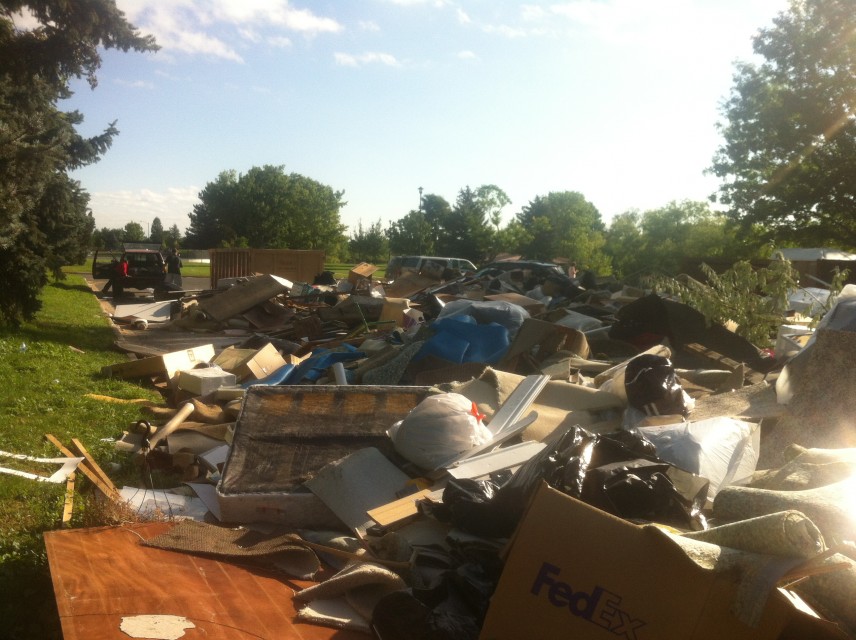 Dump site in south Boulder, one week after the flood

This morning a flat bed truck at the end of Table Mesa Drive hauled heavy machinery away.  The backhoes and large cats spent weeks repairing a drainage system that collapsed.  In the height of flooding, water broke through buried pipes above the houses and washed 20 feet of the hillside away.  The “trail closure” sign at the sidewalk has been removed but 25 yards away a fence has been erected to keep people off the trail. 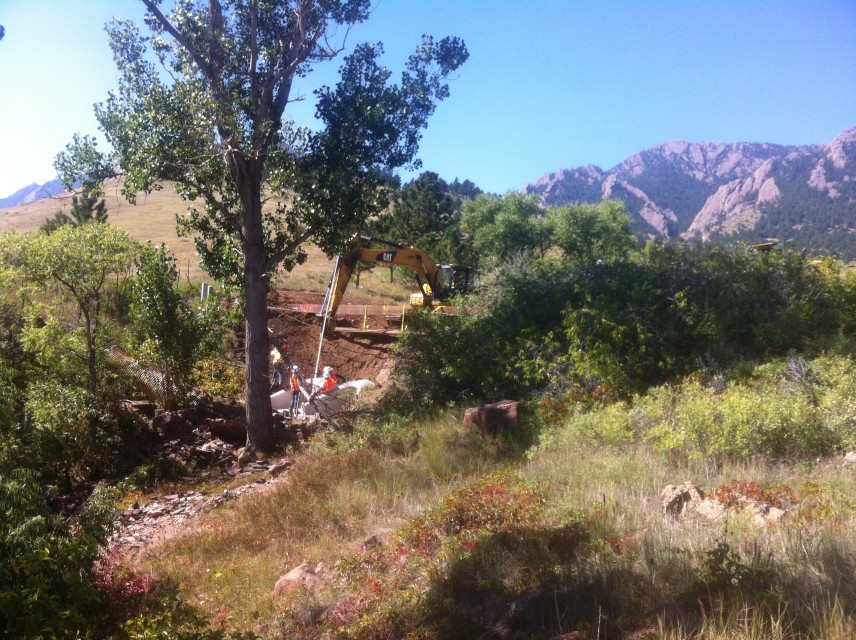 Table Mesa drainage being fixed by backhoes and cats

Highway 119, a vital connector between Boulder and the mountain town of Nederland, reopened one lane of traffic in each direction at 5pm on October 6, several weeks ahead of schedule.  Over 20% of the 17 miles of road was either heavily damaged or washed into Boulder Creek.  Instead of an easy 20-minute commute to Boulder, residents used alternate routes that sometimes averaged 2 ½ hours for a one-way trip.

H omes and city infrastructure weren’t the only property that sustained damaged.  Boulder County owns 146 miles of trails and over 45,000 acres of open space.  Within moments of the September 12 flood peak, yellow police tape appeared at every trail access point with signage announcing “Trails closed”.  Anyone caught trespassing faced a $1000 fine. 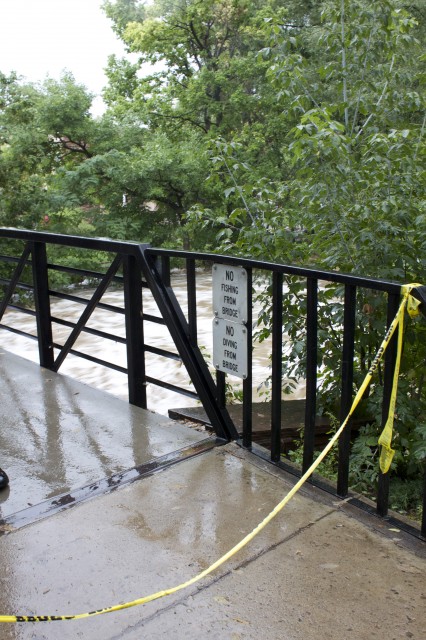 Trail running in Boulder came to a complete and utter halt.  There was zero access to trails anywhere in the county.  Reports from Open Space and Mountain Parks (OSMP) detailed rockslides, cuts of gullies scarring the mountain and trails that were impassable.  Trail racing also ground to a halt, with all but one race in Boulder being canceled for the remainder of the year, and regional races being postponed or re-routed.

I interviewed Jim Reeder, Land and Visitor Services Division Manager at Boulder’s Open Space and Mountain Parks about the current status of the trails.

TAUR:  OSMP has 146 miles of trail that it currently maintains. To what degree was the system damaged?

JR: When the flooding subsided, OSMP sent out 10 teams of three people to conduct a preliminary assessment of damage to the system. For many of us, the damage was overwhelming. In some areas, flooding had washed trails off the landscape. In others, bridges were covered in layers debris and mud. Our first assessment, conducted a few days after the flooding receded, indicated that about 93 miles of OSMP’s 145-mile system was damaged. Now, that’s just trails. Six OSMP buildings were damaged, and 45,000 feet of fencing was severely damaged by the storm. In addition, OSMP water distribution systems, along with important ecological areas also sustained damage.

TAUR: Will all trails eventually be re-opened; if so, what’s the time frame?

JR: Because of the extent of the damage flooding caused to OSMP trails, trailheads and ecosystems, it is far too early for us to say whether all trails will be re-opened. By Nov. 1, we plan to complete a more thorough and in depth assessment, which will help us identify which trails may be closed for some time, which ones may be re-routed and which ones may be abandoned. One of our main goals is to open 50 percent of OSMP’s 145-mile trail system by Jan. 1. At this point, we expect to meet that 50% level within the next couple of weeks.

TAUR:  So many people have offered to help.  To what degree is OSMP able to absorb the volunteers?

JR:  We have received offers from many volunteers and groups wanting to help restore OSMP. We are extremely appreciative of this outpouring of support and help. We are putting volunteers to work on a variety of projects from general cleanup, trail rebuilding, wetland restoration, fence repair, and digging out irrigation ditches. We are spending time every day in identifying projects that are safe and suitable for volunteers. Volunteer projects are going to be ongoing as we continue to rebuild for months to come. We have held 12 volunteer projects to date, utilizing over 200 volunteers. Larger projects using a large number of volunteers each are in the plan/design stage.

TAUR:  How will snow affect the trail system, and will any trails that are currently open be closed for the winter?

JR: There’s no doubt that snow will have an impact on our trails crews, who are working hard to repair the trail system. It is highly likely that snow fall will stop trail work at some point this fall or winter. However, we have no plans to close currently open trails for the winter.

This past week, during her governmental furlough, a good trail running friend that has asked to be unnamed volunteered for such a project on Doudy Draw in South Boulder. This trail is part of the South Boulder system that connects Spring Brook Trail, Eldorado Canyon, the southern end of the Mesa Trail, Community Ditch, Flatirons Vista and other off-shoots. The trail is still closed; at this point it’s unknown when this section will be re-opened.

The following photos are from her day on the trail:

– The tree where the Doudy draw trail crosses the creek – the bridge is gone, just a big gully now – Note person next to the tree – you can see debris 12 feet up!