Your Worst Workouts Are Your Best

I had high hopes of a good run, a run that would beat me down and make me feel the mountain.  I wanted clarity and transcendence, a runner’s high fueled by endorphins and good conversation.  I never got the endorphin rush but as my very own booby prize, the Runner God gave me a healthy, lubricated intestine.

We parked a half-mile from the trailhead at Bear Creek Elementary.  A total of six women showed up on Saturday; a mixture of soccer, illness, and travel topped the list of excuses to ditch the weekly ritual.  This loop is one of our shorter runs; it’s a fast six miles with a good mix of climbing, flats and downhills.  In less than sixty minutes I’d be sitting at the coffee shop with my very own large cup of black gold.

None of my usual pacing buddies were around.  I tried to dial back the speed but couldn’t run slow AND climb at the same time.  Apparently I don’t have enough coordination to apply both forward motion and ease.  I led the group and within minutes was out of earshot of the other women.

At the top of the hill I waited at the turn for everyone to catch up.  My breath was even; a little sweat prickled the back of my neck and my hands were warm.  All systems were “GO” and I thought happily about the hot coffee that soon would be mine.

After reconvening we ran behind NCAR and pounded along the red dirt of the Mesa Trail.  There were no other runners or hikers out and I didn’t see hide nor hair of the mountain lion that was spotted north of Mesa Elementary a few days ago.  Not that I would notice a mountain lion unless I stepped on it, really, or it started running beside me.  But that’s beside the point.

The brilliance of the sky and the overall dormancy of the pre-spring terrain drew me out of my body into the world that was shaking off the last traces of winter.  With no one to talk to, I got lost in my thoughts as my legs kept time to some internal rhythm.

I rounded the last corner and ran down the service trail that wound around the base of NCAR.  Only two miles to the trailhead, an easy sixteen-minute cool down after the heart-pumping sprint up the mountain.

A gentle twinge in my belly pulled me from my reverie.  This wasn’t the usual “I have to pee” fullness.  I’m a grown woman and have had to rush to the bathroom a handful of times with bowel cramps.  I’ve never “not made it” to the toilet and have only experienced this sudden, undeniable urge in the safety, comfort and privacy of my own home.

I decided to ignore the feeling and hope for the best.  What else was I going to do… wait to get eaten by a mountain lion with my pants down?  I don’t mind a 20-second squat to pee behind a tree, but I wasn’t going to chance leaving an aromatic present that could be traced to my own backside.  I decided it couldn’t hurt to let myself hurtle down the mountain just a tad faster.

I let my mind wander in hopes that by ignoring the physical sensations, they would thus disappear.  This was really “mind over matter” in a most literal sense, whereby ignoring the obvious makes it not as real.  I’m sure I’m not the only person with documented intelligence to use this method of wishful thinking.

Sudden intestinal cramping warned that the inevitable was not far away and if I wasn’t careful, I’d carry more to the car than I bargained for.  My heart sank to see I was smack in the middle of a treeless path that runs parallel to a gorgeous row of upscale houses.  Anyone looking out the back door would see me, as would anyone coming over the rise of the hill.  What was I going to do? Find a tree and drop a chalupa, or run faster, get to the car and speed to the coffee shop? 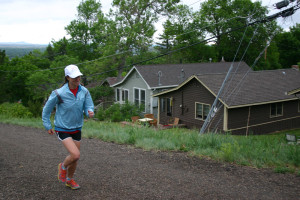 An ingrained sense of propriety sent me sailing for the car.  I practiced yogic breathing and let my mind wander far, far away from the physical discomfort.  Loath to admit that my body was failing me, I ignored the turtlehead and kept running.  I have always despised being told I can’t do something and even though I’ve gotten awfully good at listening to my body, sometimes I’m not a huge fan of the message.  This was one of those times.  I didn’t want to be caught by the side of the trail with my pants down, destined to be the butt of a recurring joke.  My ego was too big to handle the urgency of the situation in an amusing manner; thus, I decided to take my problem to the sanctuary of indoor plumbing.

Not two days later the same thing happened, only it occurred three miles away from my house in utter darkness.  No one was with me at 6:15 that morning, and I deposited some butt fudge behind a very large pine tree.  Later that day I happened to be reading an issue of “Runner’s World” and came across a column listing readers’ “most embarrassing moments”.  One reader said “you’re not a runner until you’ve pooped on a run”.  I had no idea that dropping a load while gallivanting in nature was a runner’s rite of passage.  Had I known that I wasn’t considered a “real runner” until I defecated in the woods I would have aggressively worked toward that goal years ago.  Now that I can officially be called a “real runner”, here’s hoping next time I’m close to dense trees. 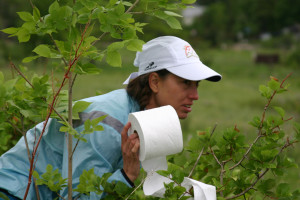 One Response to Rite of Passage – Ladies Room