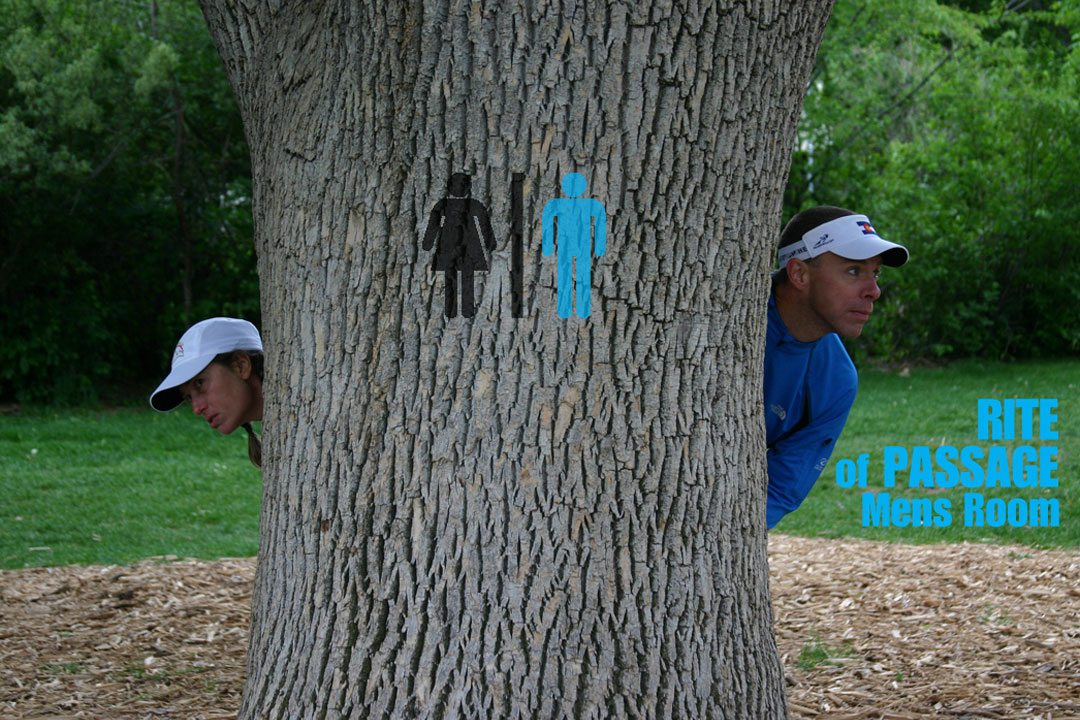 While we are proud runners there are times when we are not so proud. It’s when your pace starts to fall off and then you feel the weighted rumble from the engine room that something is headed for the exhaust pipe. Oh no…it’s time for the dreaded potty break…and not the kind that can be discretely performed while on the lookout for passing cars or farmers with shotguns. It’s the kind best saved for the porcelain throne at home with the latest issue of Runner’s World magazine. You would think between 22 feet of small intestines and 4.9 feet of large intestines there would be enough room for it to just stay in place. But noooooo! Here come The Trots!

There are a few terms my running friends and I like to incorporate when speaking in public about our body-business. We’re men and take great pride in our body functions whether it be in volume (noise) or volume (size). I guess we’re still basking in the glory of discovering fire and inventing the wheel and think we can get away with our behavior. Behind every seriously poised male is a boyish giggle that’s a cheek-squeak away.

The first is “Code16” referring to the 16th letter of the alphabet…I’ll wait…see, clever. Taking a pee break is no big deal. With today’s skimpy running shorts I feel exposed most of the time as it is. Going Code 16 is not as tricky as its dreaded bigger brother.

The second term is “Sick Bear” as in “Wow, I was running and came across something that must have been left by a “sick bear.”  When I was running in China last year I used the term “Sick Panda” to be geographically sensitive. The Sick Bear is the most feared moment on any run. To beat this fear you need to embrace your Sick Bear…let me rephrase…Just accept you are going to poop when you run. Why worry and read countless articles on what and when to eat to avoid this issue. Just plan on going. Dogs, deer, foxes, coyotes, cats, bear and countless other animals poop outside why can’t we? 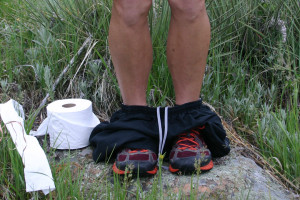 Going outside is a great experience. Much better than the Fecal-Time Machine known as the Port-o-Let. Nothing like seeing what everyone else has done in the 2 hours before a race. Next to the Port-o-Let should be the Acid-o-Bath. There are other reasons to fear the “Plastic Case of Commotion”

The more frequent you run and the longer you run you will eventually find yourself hiding as best one can and doing something you would rather do at home with proper amenities…and I don’t mean soap (but that would be nice too). Here are a few tips:

1. Do your “Code16” first or you could make a real mess by peeing into the back of your shorts. Yes, the voice of experience.

2. Wait until the last possible moment. It’s quicker and the feeling of desperation helps with Catholic guilt and shyness. I did a sick bear on a group run and when I caught back up to the group they were amazed I went at all. It was a 10-second pit stop. Take that NASCAR!

3. Stomp on the high grass before squatting or you might get a little tickle or surprise. I once started getting into my stance only to see a snake between my feet! When I backed up to get away I almost tripped over a duck that came screeching out of the weeds. I was scared sh*tless but saved a duck from being attacked by a snake. That duck owes me big time!

4. During a race you will want to exit the course a few feet and face possible oncoming traffic. They would rather see your smile… Don’t drop a 2 near water sources (lakes/streams). Some race bibles ask you bury your duty 6” in the ground. Then there’s something called “smearing.”

5. Just accept it as being part of an elite group. You run long enough and frequent enough to need this type of break. Good for you!

6. Before taking a stab at local vegetation for help in the cleaning process you better know your plants.

7. Never trust a fart. Especially past mile 40 of any run. Russian Roulette is not a game you want to play in your shorts. Odds are the weapon is loaded.

Of course we can’t always run in the woods free from sight. Sometime we are in a neighborhood or busier section of town. What do you do then? Go where the graffiti is! This is usually somewhere off the beaten path and somewhat secluded.

Like I said, I’m not proud but I am a runner and I’m not stopping. HAPPY TRAILS!