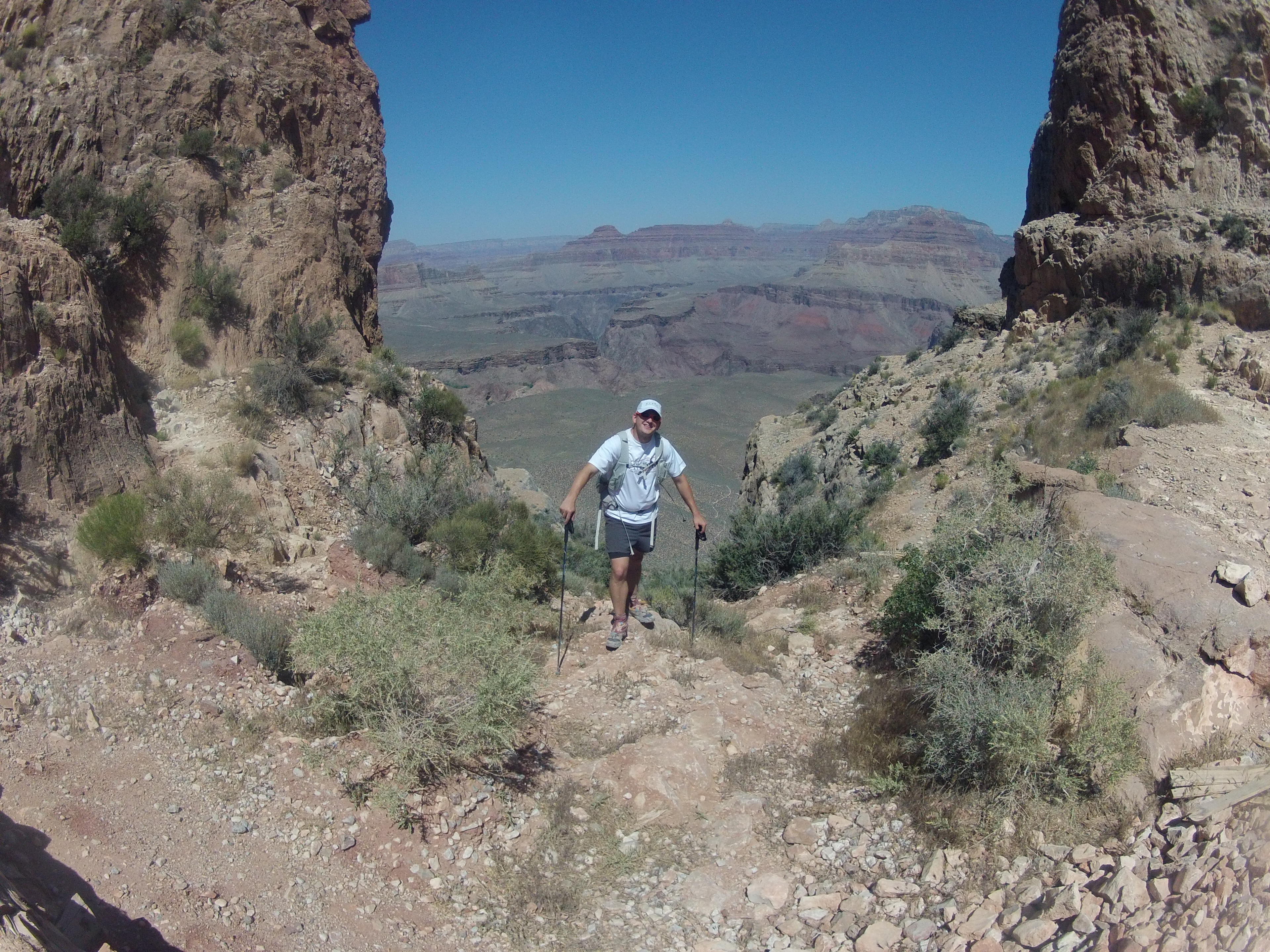 On May 19th, myself and a few of my ultra running friends woke up with the sun along The Grand Canyon’s North Rim. We had driven 12 hours from Colorado to embark on one of Ultra Runnings true Rights of Passage, The Grand Canyon Rim to Rim to Rim (R2R2R). I knew from my extensive research since I first thought about taking on the journey, some 4 years ago now, that it wasn’t an easy sojourn. The Grand Canyon is a massive place where temperatures between the rim and the bottom swing drastically. A journey run across the canyon is one that requires the utmost respect, and due diligence, from those who seeks it’s wonders up close and personal. So, it was with no surprise the number of un/under prepared runners we encountered on our journey. In this post, I want to share with you some of what I know and learned about running a Grand Canyon R2R2R.

18 Minute Video of Our Adventure

Which Way Do I Go?
There are many variations of Grand Canyon Running. The basic adventure is the R2R, where you start on the North or South Rim and then head over to the other side. The next step up is the R2R2R. The basic R2R2R journey is either 42 or 46 miles long depending on which trails you take. The South Rim affords adventurers two options for ascent or descent. The South Kaibab trail is steeper and a shorter climb then it’s sister to the West in the Bright Angel Trail, which is a longer more gradual climb up from the Colorado River. Most folks choosing to do a R2R will begin on the North Rim and those who seek the R2R2R will start on the South Rim. Why? Because the climb up the North Rim is long and arduous. 13.4 miles from the Phantom Ranch (the Bottom) where runners must climb 6,000′ to the top of the rim. Might not seem that bad except… the last 4.7 miles of the hike features a 4,000′ climb at a 12.5% Grade which includes the switchbacks. With that said, Starting a R2R2R on the North Rim is the harder way to go because this climb will destroy what’s left of you at the end of the day.

Hydration
There are really two ideal times of year to take on a Grand Canyon Adventure. Spring and Fall… keeping in mind that the water spigots in the Canyon don’t turn on until the weekend before Memorial Day and are turned off sometime around Columbus Day depending on conditions. Therefore, runners are forced to filter their own water from available streams prior to the May date and after the October Date. Beyond that, when we ran the canyon on May 19th, it was 108 Degrees down near the bottom of the canyon. It is simply too hot to run the canyon during the summer months when temperatures can soar to or above 120 degrees easily. On our adventure we each drank close to 500 oz. of water just to stay hydrated on the run. I’ll let you soak that in for a minute in terms of just how much water that is.

Food
There is a restaurant and canteen on the North Rim out near Bright Angel Point, however running there from where the trail crests the rim will add an additional 2+ miles to your adventure. On the South Rim, there are no shops or restaurants atop the South Kaibab Trail. The run between South Kaibab and Bright Angel trailheads is a long paved 5 miles crawling with tourists, there is a Free bus though.. We found no snack bar or restaurant at the Grand Canyon Visitors Center (surprising actually) but found ample services for food at the Bright Angel Trailhead on the South Rim. PLAN TO CARRY WHAT YOU’LL NEED TO EAT FOR THE ENTIRE JOURNEY. There is a small canteen at Phantom Ranch in the bottom of the Canyon. Phantom Ranch is incredibly busy given it’s size and the prices are what you’d expect for being so far from the nearest road.

This Is a GRADUATE RUN
While descending the Bright Angel Trail on our journey, we were intercepted by a female runner looking for a ranger. She was panicky and told us of a runner being “down” up ahead. My group ran our fastest 2 miles of our entire trip to run ahead and try to assist the runner given the fact that I am a Wilderness First Responder. When we arrived at the runner he looked like a walking Margarita. He was dry as a bone (no sweat) and covered from head to toe in salt. I looked at his Garmin and noticed he was at mile 40. I asked if he had ever run an ultra-marathon before to which he responded, “No, But I’ve run over 50 marathons.” Well.. aint that cute?! I tried to explain to this gentleman that the R2R2R is a graduate run for Ultra-Runners. Meaning, you need to be a pretty damn experienced ultra-runner and on top of your game to safely and comfortably complete the journey. The basic route is a 42-46 miles run at more then a 100K effort. Marathon training, in most cases, just won’t cut it. I was honestly quite insulted that this gentleman thought that he was well prepared for an adventure of this caliper and then, he refused most of our assistance. It wasn’t until I explained to him that I was a WFR and a seasoned ultra vet that he decided to receive our help. Poor guy had 6+ miles, UPHILL, left to his adventure. Look, bottom line is this; this is difficult undertaking that demands proper training, preparation and respect. You must run the Grand Canyon as if aid stations do not exist. If you get hurt or need medical assistance in the canyon.. you are literally MANY hours from being carried or escorted out and the heli-ride is not going to be cheap! PLAN, PREPARE, PERFORM.

It’s ::bleeping:: Hard
This veteran ultra-runner has run quite a collection of races over the years, including some incredibly tough 100 milers. The Grand Canyon R2R2R Adventure humbled me. Once we reached the South Rim and looked back at what we had just done (half way) and had yet to go, I was pretty speechless.  I actually was having a hard time fathoming how we had just even come this far and wondered how the heck I was actually going to get back. About 3 miles from the top of the North Rim on our way back, I had to stop and tell my running partner that I was wrecked. I don’t usually admit this, but I was. I was wobbling and struggling to stand. I was mumbling when I spoke. I was tired and falling asleep, cold, simply exhausted. Think about it… it’s like running stairs for an entire day. You spend hours going down stairs then hours going up.. then you repeat the process. The 53 mile version we ran took us just shy of 17 hours. In general, the rule is that the average mid-pack ultra runner will take 14-16 hours to complete the standard 42 mile or 46 mile routes. Considering that the average mid-pack runner will be at 8-10 hours for 42-46 miles in your typical ultra, that puts it into perspective. The Canyon is hard and unforgiving. Be ready for that when it finally hits you in the face with 3 miles left.

In the end, A Grand Canyon Crossing, Double Crossing.. or even a Quad Crossing is really very doable for ultra-runners. Many folks take on the R2R and that tends to be enough for them. We endurance types just aren’t wired like that. We seek more. We push further. We dare to go within. However, none of this should be done without a little humility, preparation and respect for mother earth. Because we must always remember that Mother Earth WILL WIN every time if you let her.

6 Responses to Running The Grand Canyon