Tutu Cute for You 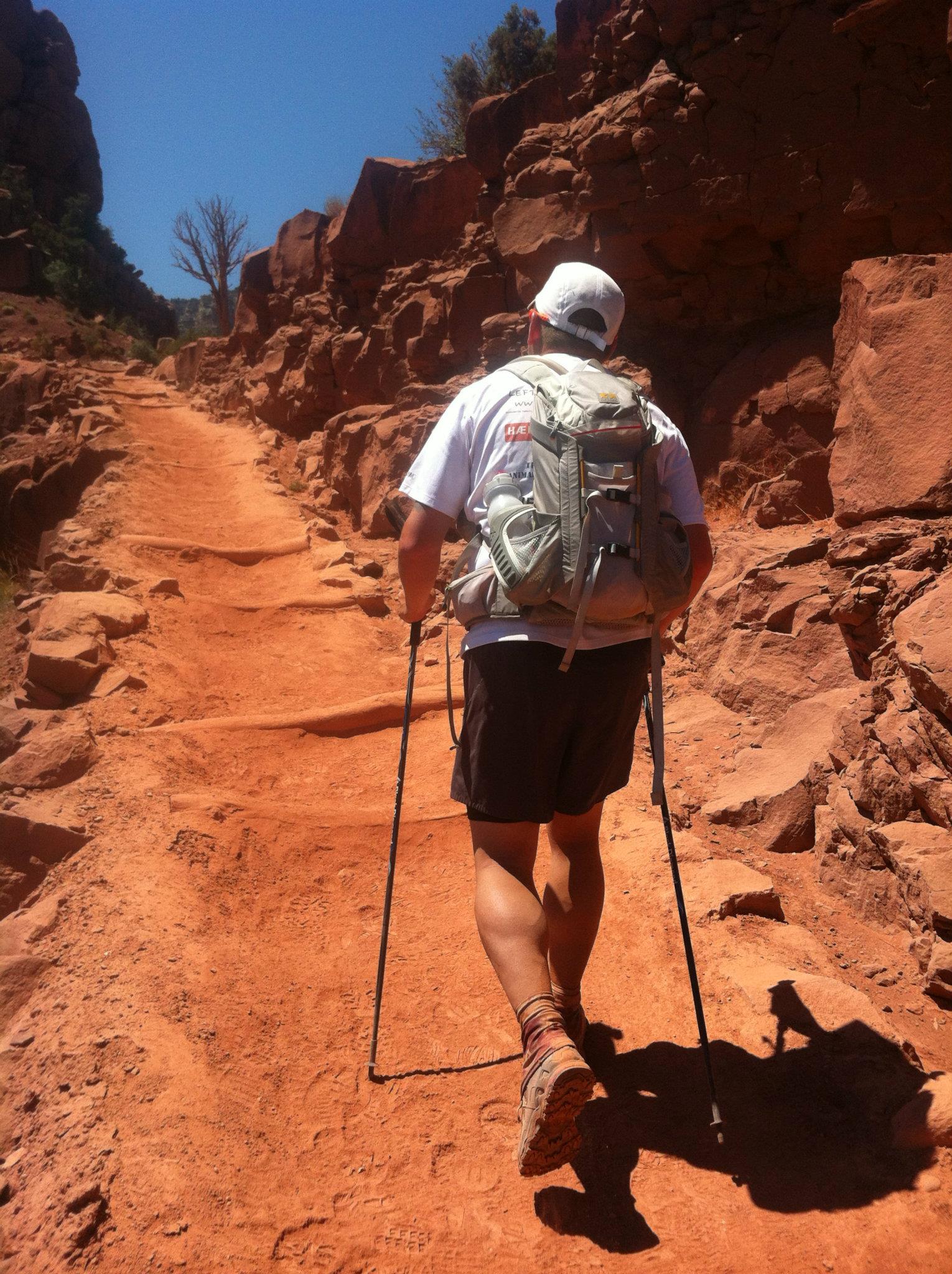 As I struggled up the back side of Hope Pass in 2011’s Leadville 100 Mile Ultra, I was incredibly grateful to have my poles in hand. Or was I? In all the years I’ve been running Ultramarathons, The 2011 Leadville 100 is the only official ultra run where I’ve run any length of the race with a pair of poles in my hand. Over the years, I’ve lurked as the long discussion about poles has played out. Purists are totally against them and many others assert that they offer an unfair advantage to those using them. Not only have I now used them in at least one event, but I recently just used them on my trek across the Grand Canyon. In this post, I’d like to offer up my thoughts on the trekking pole discussion.

Races Don’t Allow Them
This is correct. Many of the races don’t allow trekking poles out on the course, but the reason has nothing to do with if the poles are an advantage for some runners or not. The reason is simply from a risk management perspective. When I guide here in Colorado’s Front Range, we actually discourage the use of poles by our clients. Mostly because if the client is to fall, the poles pose a serious safety threat to the hiker as well as those whom are hiking around them. The same is true for poles during an ultra. Most races ban the use of poles in their race because their use poses a serious threat to the safety of the runner and other runners.

They Offer An Unfair Advantage
In my opinion, they actually don’t. I find this statement to be complete hogwash. Those who have ever used poles in an event will attest to the fact that it actually takes more energy to use the damn things then not. Not only are you swinging your legs in the running motion, but kinetically, you’re swinging your “weighted” arms now as well. You use mental energy concentrating on hanging on to your poles and not dropping them, where to place them, and trying to get into a cadence with them. Mind you, just because a runner is in cadence with running poles, doesn’t mean it makes them faster. After using hiking poles for Hope Pass in 2011, I could’t wait to get rid of them! My arms became fatigued and very heavy during the race and this actually played a major role in my ability to swing my arms later in the race when I didn’t have them.

They Help Me Stay Upright.
True. This is actually the major reason why I decided to use poles at Leadville ’11 and in the Grand Canyon. Actually.. the ONLY reason I chose to use poles was to help keep me upright while on the uphills. Normally on the uphills I have terrible posture. I slouch forward and slump down. Digging my way up hill with my hands on my knees. With poles, I’m just using them to correct my posture and keep me upright. Do they help me propel uphill? NO! That would be incredibly stupid, at best, because I’d be blowing more energy trying to “row” my way uphill in a running race. I use them to help me breathe and inflate my lungs as much as I possibly can. While most runners can do this without the need for poles.. I choose to burn more energy by using poles just to get air into my lungs.

Downhill With Poles
Ever watched someone run downhill with a pair of poles? It’s like watching a giraffe running in your local 5K. Appendages flailing all about.. well.. those are the poles actually. No one is running downhill with poles, and those who are look ridiculous. Pole company claims that poles offer relief for your knees on downhills, is actually unfounded science. There is a lack of any really, peer-reviewed, evidence. Either way, if you don’t have a way to store your poles, or if your poles aren’t collapsable, you’re a hot mess going downhill with them and they’ve now become more of a pain then they’re worth. If you think for a second that they offer any advantage on a downhill section of a race, you may require a psychiatry appointment to see if your screws are in tight.

Other Considerations
Ever try using a handheld bottle when you’ve got a pole in your hand? How do you even get your hand held out when you now need to hold both poles in one hand and reach back for your water with the other? How much energy do you think that burns? Ever seen someone break a wrist after falling with poles in their hand? I have it.. it’s pretty gruesome. Don’t think that this isn’t on the mind of pole users. Would you call increased risk for injury an advantage? What about the meat on your hands? For those who don’t wear gloves while using poles, they’re hands often times become raw or sensitive from the constant abrasion of the hand grips. For those who do wear gloves, it’s just one more piece of equipment to have to worry about and often times, fingerless biking gloves aren’t the most forgiving piece of clothing on your hands.

The bottom line is this. In races where poles are permitted, it’s up to the athlete if they use them or not. In my opinion, and in my personal experiences, I can attest to you that the use of poles offer no advantage in an ultra distance event and if anything, they are more of a nuisance and cause a runner to waste more energy then is necessary. Those who even consider using poles during events, should take the time to train with them. Get familiar with the poles and the many intricacies of using them. I would say that a majority of those in our sport who diss the use of poles during an ultra, fabricate reasons why they shouldn’t be allowed without ever having tried using them themselves before offering critique. The last I checked, Ultra marathons have running AND HIKING in the very definition of what it is to traverse a distance in ultra marathon style. So if we’re hiking for some of the race, then why shouldn’t poles be allowed?

I’ll let you decide. But I feel that this truly is an argument in our sport that has run it’s course and is getting as stale as a box of Kix from 1987. If it works for you, GREAT! If it doesn’t, move along and run your own race. Aren’t we all an experiment of one anyway? Is it really a race over 100 miles when you’re in middle of the pack? Exactly.. spend your energy on training more rather then if Sherpy John is using a pair of Carbon Fiber Black Diamond Ultra Distance Trekking poles. 😉

11 Responses to The Trekking Pole Advantage