Trail Running with the Dog 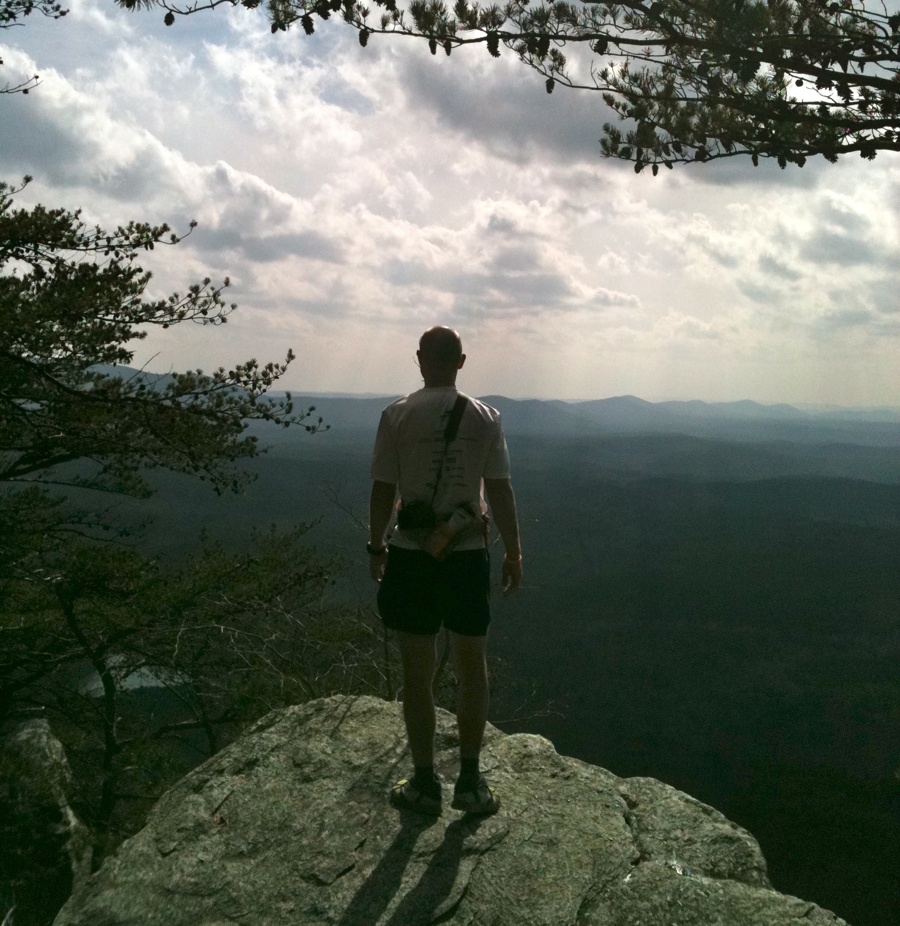 When we decided to stay in Cheaha State Park I was zeroing in on the Pinhoti trail.  We’d been away from good single track trails for far too long.  Cheaha State Park made sense given it’s relative location to the trail.  In general, the quality of a park has more to do with the trails than anything else the campground has to offer.  Basically, when you travel full time and you’re a runner… you’ve got to have a place to run.

I was excited about the Pinhoti Trail system which is 335 miles long and extends the Appalachian Trail all the way South East of Birmingham.  With that kind of distance I had a pretty good idea I would have some good trail to run.  What I didn’t expect where all the bonuses of the Cheaha State Park.  The park is at the highest point in Alabama, 2400 feet.  With the surrounding country side at a much lower elevation (1100 feet or less) it makes for outstanding hiking, running and offers fantastic views.

But before I get into the secret trails of the park a couple more things we loved about Cheaha.  The park offers free wifi and it covers all the areas with buildings including the campgrounds.  How awesome to stay so fully connected.  Next, the campground was almost empty during the week and the park itself was scarcely used during the winter months.  Finally, the campground had full hookups: electrical, water and sewer.  Even if we didn’t have the motorhome we could haved stayed in the hotel, a chalet or cabin.  Point is that this place is unreal.

Ok, now for the secret trails.  First, the only way it seems to get to the Pinhoti trail is to leave the campground and walk to either the trail crossing point north of the campground or drive/walk to the trailhead a little further up the road.  Not so.  If you’re in the park and walk down the trail to Bald Rock Point there will be an unmarked path leading east.  It looks like people have just wondered down amongst the rocks but it keeps going and going.  After a 100 yards it is really a trail and there are suddenly light blue blazes of the Pinhoti Trail.  Keep hiking down the trail for the full half mile and you intersect the actual Pinhoti trail with a wooden sign.  The sign tells you it’s .5 miles back up to Bald Rock and 1 mile back to the Blue Mountain Shelter.  If you’re staying in the campground, it means you can walk 200 yards outside the campground and start hiking vs a 1.5 mile road hike.

Next is a trail off the Pinhoti Trail going back into the campground.  If you walk to the intersection to the Blue Mountain Shelter you’ll see the shelter to the east.  Look the West at this intersection and there’s a trail leading up toward the campground; it’s not marked in any way.  Follow the trail up.  At times it gets a little over grown but it is / was a trail.  Keep following it and eventually you come to a creek with intersects with an actual marked trail that follows the creek.  Instead of following the marked trail, you can cross the creek and follow the trail which becomes something more official looking. It also seems to be marked as well.  Eventually, you’ll reach a series of old buildings that appear to have something to do with the water system and spring.  Hike up the road and you connect with the main road that circles the park.

From here, if you take a right and walk along the one way road toward Bald Rock Lodge you’ll intersect the Mountain Express Trail which becomes a spaghetti network which I did not fully explore.

Next is not really a trail but an unmarked waterfall.  If you walk down the Rock Garden Blue Trail (Blue Hell) you’ll come to a point where you can hear rushing or falling water but can not see it.  At this point, break off to the left, heading south, and start climbing over and around boulders.  Eventually, you’ll come to the creek.  Cross the creek and keep climbing around to the front of the boulders where the creek was heading and you’ll come to a waterfall.  It’s not listed on anything I’ve read.  If you’re daring and know how to free climb you can actually make it down to the waterfall’s bottom, across it, and up again to other vantage points.  Be really careful, the rocks are super slick.

Finally, there is the trail that isn’t.  One the national forest map there is a trail loop marked which is  supposed to be on the northern side of Cheaha Lake.  It’s no longer there.  I hiked around those woods for a while and could not find any resemblance of there ever being a trail.  It’s filled with lots of tree debris so maybe I just couldn’t find the start.

Hopefully you’ll enjoy the park even more while hiking some of these secret trails.