I had heard for months how sweet the trails were at Hobbs State Park and Conservation Area; how I just had to sign up for the War Eagle trail races.  Held annually on National Trails Day, there’s always a scheduling conflict but I decided to sign up and quickly wrote this in before I committed to something else. With 10/25/50K options, there’s a race for every runner, and I chose the 50k with an eye on improving my PR.

Two days before the race, I get a message demanding to know if I’d checked my email yet.   Race director Jeff Genova of NWA Racing had a surprise for us: Luis Escobar, photographer of Born to Run fame, would be shooting the course for us….and he’d be giving his presentation “Running with Tarahumara” the night before. Uh, yep! You bet I’ll be there. After a madcap dash through construction, I made it to local running superstore Rush Running for packet pick up to find a line of local runners and Luis himself manning the table.  The well organized crew managed to get all 4 packets I needed in roughly four minutes, and off to dinner I went. 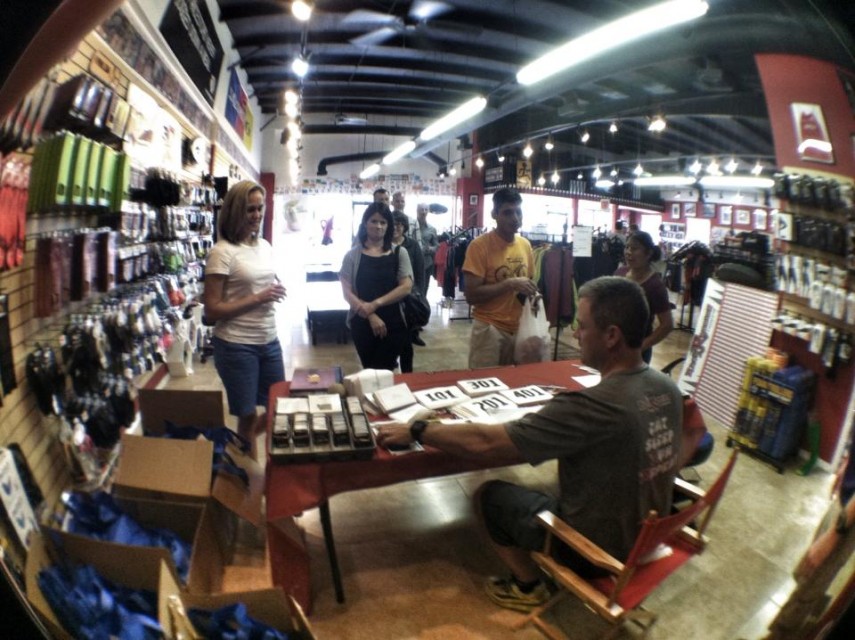 Luis’ photo essay is an informal affair, full of stories you might share over a campfire. We started off with photos from his trip three weeks prior through Death Valley; keep an eye out for the latest from Luna Sandals and Patrick Sweeney, that’s all I’m saying. We learned more of the backstory from Christopher McDougall’s bestselling Born To Run novel – Why would someone like Scott Jurek really make that kind of trip? What’s the meaning of a bola team’s shirt colors? – and delved into questions like “Is all this exposure to outside culture, which the Tarahumara have been actively resisting, really a good thing?” All too soon, the talk was over, handmade necklaces from Hawaii and Luna Sandal certificates were raffled off, and though we wanted to stay and chat, the weather forecast for the evening sent us home.

We had severe thunderstorms with lots of lightning on tap and even a few flash flood advisories in effect, but what were the chances the race would cancelled? “Zero.” Those of us that camped managed not to drown or get blown off our little hill, and soon enough the alarm sounded and away we went to the shuttle point. Runners huddled in their rain shells under eaves waiting for the one little shuttle that could; we worried we would miss the race start, but on arrival at the Hobbs Visitor Center, we were greeted with the news that race start would be delayed a half hour to wait for most of the lightning to pass…and then we heard more welcome news: the storm would be clearing out in a few hours and we’d spend most of the day deluge-free. 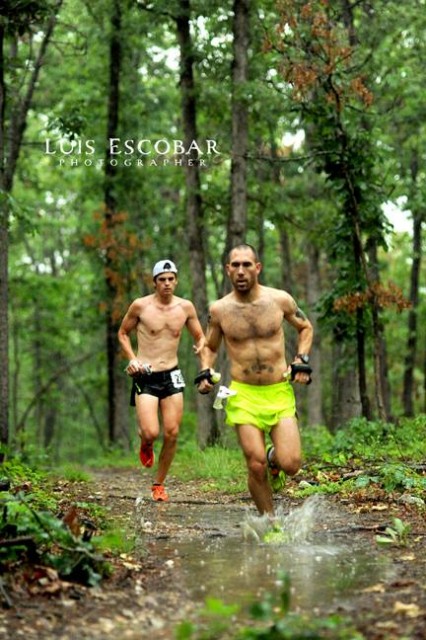 Nearly 300 hundred runners on narrow singletrack makes for a little crowded race start, but everyone was polite as they settled into their own pace.  By the time I hit the first aid station at mile 5.6, ably staffed as always by TATUR Racing, the IT band was tightening up but remaining manageable; after a quick water bottle refill and portapotty visit, I was off towards Piney Ridge about 3 miles down the course. My soon-to-be favoritest volunteers on the course, Dave and Aaron, immediately asked what I needed upon arrival. On a whim, I replied “Beer!” and just like that, a cup appeared in my hand. Magic!

From here, the 50k runners diverged onto the “Bunny Ears”, a one time loop that featured some of the nicest running of the course. Wide, open smooth gravelly trail that was over all too soon – but not to worry, as Dave and Aaron were prepared for me. “What do you need when you get back?” “More beer!” And there it was, waiting on me. IT band still being cranky, still being manageable; couple of Pringles down the hatch and I was off to the next aid station. Again only about 3 miles away, Townsend Ridge volunteers gave me an ominous warning: the next section was hilly, with lots of up and down and muddier than the rest of the course.

It went by quickly though, and with help from one of the many friendly course marshals, I was off to rejoin the 25k route for two quick loops and a finish. What no one warned me about was the final incline, and I wasn’t the only one who fell prey to a preemptive celebration only to find myself walking up a ridiculous hill around mile 29. Don’t say I didn’t tell ya. There was a brief downhill to make up for it…and then you pop back up onto pavement and a few short meters to the timing mats. Overall race results can be found here; I shaved nearly two hours off my 50k time with a solid race from start to finish.

Overall, this course is refreshing for experienced trail runners looking for a PR and it’s definitely one to share with trail newbies. Make plans for June 7, 2014 cause NWA Racing certainly is.  Luis Escobar is already booked again for and word is he’s bringing friends.  Bentonville Square has tons of great eateries and there are several hotels and camping spots to choose from. See you next year! 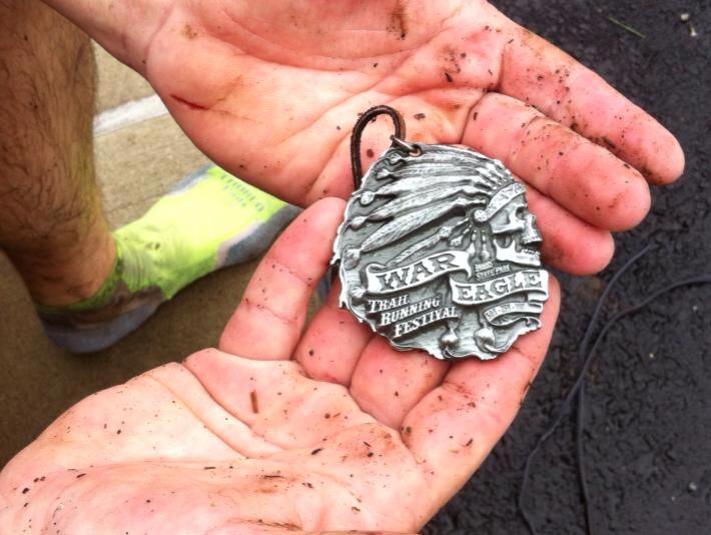