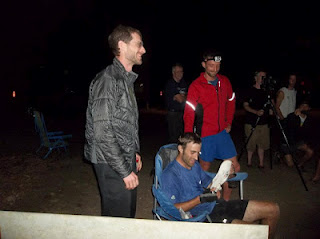 Sixty hours is the time limit hopefuls have every year at the Barkley Marathons in Frozen Head State Park, TN.

Sixty Hours is the time limit for completing 5 loops and 100 miles (some say 122+) of some of the most brutal and unforgiving terrain on earth.

Of the more than 700 who have ever tried to finish this brutal course, only 10 had ever succeeded at navigating it in its entirety heading into this years event.

There are no questions as to why this is considered, truly, the toughest ultra-marathon in the world.  Those who have succeeded in the past include individuals whose accomplishments are needlessly amplified by their success here.  All men, who have held the records for speed on such epics as The Pacific Crest Trail, The Appalachian Trail, The Long Trail, The Colorado Trail, The 14ers and 4000 Footers of NH and NY.. the list goes on.  These same men; Horton, Cave Dog, Basham, Thompson, and others; are all accomplished and celebrated Ultra-marathon runners.

Sixty hours is all it took.  For 60 hours.. all of it, he circumnavigated the course known as the Barkley.  As they talked about Maune’s record and Jared coming in.. they also mentioned him.

He flew under the radar.  Told virtually no one that he was in the event.  He has no sponsors and in turn, no shirt littered with the names of companies that support him.  His race results show that he is indeed a mere mortal, a mid-pack runner, with an ample number of ultra-finishes along side his mortal peers.

This wasn’t supposed to be.

For over 25 years.. only the front runners and elites, the celebrated, the sponsored, the heroes, the “named”.. were those who completed this event. But in just 60 hours, this man broke the mold and changed the face of our sport forever.

59 Hours and 41 Minutes in to the 2012 Barkley Marathons, John Fegyveresi touched the yellow gate for the final time. In doing so, he became the third and final finisher of this years event.. a new Barkley Record for number of finishers in a single year; and he also became the 13th finish ever.

Everyone knew who Brett was, he had finished the daunting course last year and is the current record holder for the John Muir Trail. Everyone knew who Jared Cambell was, sponsored by La Sportiva and the current record holder for a Trans-Zion Traverse. But then there was John.. this humble guy with an extensive long distance hiking background. No records, no sponsors, and average times in every race he’s ever completed.

Sadly, on the Ultra and Barkley mailing lists after his finish, one writer quipped; “I had no clue who John was until know. But wait, Who the hell is he?” I’ll tell you who he is. And so I replied:

“I just want to say that… I’ve shared some trail with John Fegyveresi.  I’ve seen him at numerous of the ultra’s I’ve been privileged to run over the years.  He is one of the kindest, gentlest, most intelligent souls I’ve ever had the honor of meeting.  He’s the real deal.  A lover of our earth, not just the wilderness areas he choses to play in.

He has an excellent blog where he shares his countless adventures.. and I implore all of you to take a closer look at this fine man. http://lakewoodhiker.blogspot.com/”

In 60 Hours, John Fegyveresi be came my hero and the hero of countless other Mid-Pack Ultra runners.  Why? Because he proved that you don’t need sponsors, or to do speed work, or run ridiculous miles, or be an elite, or be known by everyone or anyone in the community, or hold a record or any of that other garbage.. to finish the toughest race in the world. John exemplifies the beauty of our sport.. that on any given day, you can do it.  You can do anything you put your mind to.  Like the first person who introduced me to ultra running said, “All you need is to be stubborn and able to put up with some discomfort.”  John did just that at The Barkley Marathons.

I’m not saying John isn’t a good runner.  I’m not saying he’s a nobody.  What I am saying is that John proves a point I’ve been trying to make for well over three years now.  That as our sport continues to celebrate the fast and the elite, we should be equally as celebratory towards our mid-packers and back of the packers.  As our sport continues to become increasingly more commercialized, we need to continue to look for those grande accomplishments in these continuously grassroots events.  We need to continue to realize that on any given day, no runner should be under the radar.. but celebrated for their efforts whether they come in first or last.  John makes us keenly aware of this as he continues to celebrate his finish at The Barkley.

John is my hero.  An amazing man, amazing effort, amazing runner.  I hope many more like him get the same chance to step forward, and been seen.. and be heard.

4 Responses to 60 Hours At Barkley