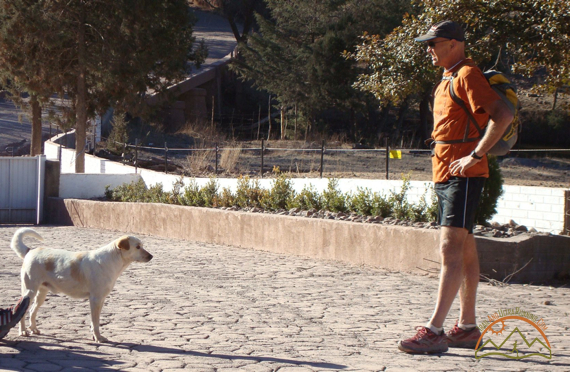 Memories and Experiences with the White Horse.

It started with the encouragement of my girlfriend to enter the Copper Canyon Ultra Marathon and looking at Caballo’s site.  I found a page full of links and messages all over the place; kinda a mess really.  Should I be having my big city web expectations from a guy who ran around in the middle of no place, living in a hut…. did this dude even have internet connectivity?

When I found the instructions about entering the race they were pretty clear; fill out the application and if you’re accepted then you pay a Donation. No entry fee but a donation and of at least $150. Quirky but hey, here’s a guy who abandons civilization as we know it to run around in one of the most remote parts of the world.

See where I’m going… you kinda had to expect something a little different from Caballo. You were best served by learning to avoid applying our commercial conventions to him.  Just follow the horse’s lead. Quirky, eccentric or whatever people wanted to call it, there was one thing that was clear… he had a mission… he was determined to help the Tarahumara.

A little to my surprise, I was accepted… and paid my “donation”.  Caballo had created a Mas Loco discussion group where I gradually understood how the race worked.  Caballo’s central theme was, show up ready to run and he through in a couple travel tips. Trust the horse.  There would be hotel rooms… no reservations needed.  No need to cook… there would be plenty of places to eat.  Take the train… it would be easiest. Hike down with the group… it would be beautiful.  Most of all… be gentle and kind to the the Raramuri.

When I arrived to the central meeting point, a hotel poised above the canyon, I was greeted by Caballo himself… yep he was actually real.  He thanked me for coming and spoke in a truly genuine way.  He even remembered my girlfriend would be arriving later in the week.

As I got to know him over the next day this is what I gathered:

Caballo was authentic and spoke from his heart.  I could see no traces of fame in him, even as the central character of a New York Times Best Selling Book.  Caballo’s sole mission was to help the Indians and not be famous.

Also, he took chances but those chances were simply the reality of the place.  We marched along marijuana fields where he warned us about talking and told us to put the cameras away.  He wasn’t trying to impress us by hiking us past those fields… this IS life in the Sierra Madres.  Caballo was a realist.  I overhead him telling Doug Diego the exact route we’d be hiking and set a time for Doug to start a search if we hadn’t arrived.  Such is the way in those Mountains.

After arriving in town and spending a couple more days around Caballo I learned more about him: His compassion for the Tarahumara was central.  He reminded us to be gentle with the Tarahumara, befriend them and buy them meals.  They are very shy and peaceful people, certainly not accustom to our glad handing and back slapping. Caballo cared deeply about the Raramuri… the race and the town were his vehicles to accomplishing his goals.

I also learned he was a pretty laid back dude. Caballo told a fellow runner, who had arrived earlier in the week, that she could lead the orientation hike since she had hiked it once before.  She confided in me that she hoped she could remember the route.  Caballo was pretty unconcerned about it all.

And I saw more of Caballo’s heart after the race.  I heard him tell a friend about his frustration with the politics that had become a part of the event.  These were politics of the town, of the state and of outside influences which had nothing to do with the best interest of the Tarahumara.  He said he’d stop being involved in the race if it weren’t for help it provided to the Raramuri.  Hundreds of tons of much needed corn were provided as prizes for all finishers. This was corn the Indians desperately needed. He was tired and he was frustrated, but he’d never give up because he had an unwavering commitment to helping those who needed it.

Also, when you watched Caballo and his dog, Guadajuko, his love poured out. He loved to play fight with Guadajuko (aka the Ghost Dog of the Sierra Madres); those two were so fun to watch.  Guadajuko knew Caballo’s heart.  Caballo had told me he tried to return Guadajuko to town a couple of times as a puppy but he always made his way back to Caballo. Guadajuko instinctively knew how good of a person Caballo was.

Caballo is now legend.  His life was mystical before he became famous… many didn’t even know if he was real.  After achieving notoriety what did he do,  he continued to devote his energies solely to the purpose of his mission of helping the Tarahumara.  It’s amazing and only fitting that a man with such compassion and devotion was provided an ending which would further this legend and help serve his cause.

Caballo was running on a trail by himself; no cameras, no followers. He was in his element doing what he loved.  The moment was pure.   He was found by a friend laying peacefully in a beautiful area. His body was protected and watched overnight by fellow Mas Locos Runners until the next day when he was led out of the canyon by a white horse name Tequila.

Caballo is legend; let us not forget him or the Tarahumara.