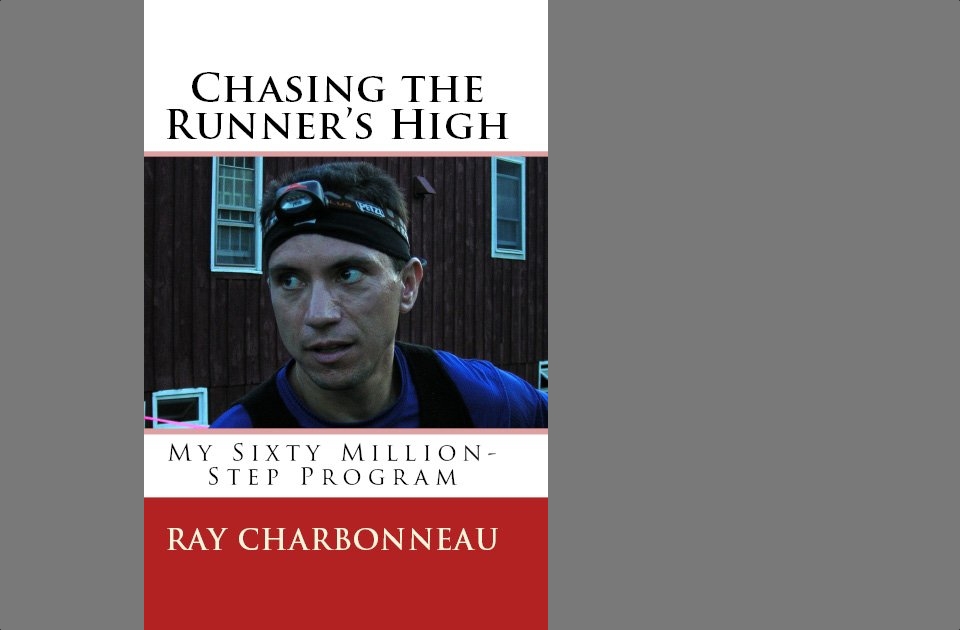 Ray Charbonneau’s book Chasing the Runner’s High is a chronological account of his personal and running career.   It reads similar to a blog or autobiography, sometimes scattered, not too focused, but true to the runner’s style.

Charbonneau does everything from list his gear, describe his races, and dispenses advice along the way.   Although Ray admits that he is “nobody” when it comes to the running community, he tracks his progress from shorter races to completing his first 100-miler.

If you’re new to running, you may enjoy the first half of this book which includes a lot of running basics and tips for beginners.   If you’re an avid trail runner with an interest in ultra running, I would recommend skipping to the second half of this book.   This is where it got more interesting for me, and it read more like a race report.

Charbonneau begins to share personal details like his divorce, his obsession with the sport, and turning to alcoholism after running with the Hashers.   After his second DUI, Charbonneau knew he had to make a change.

Charbonneau compares his addiction to alcohol with his addiction to running, exploring an interesting parallel.   Since drinking is such a big part of the ultra running community, when does it become unhealthy?

Charbonneau stopped drinking, but continued running.   Obsessing over goals and chasing a sub-24-hour 100-mile finish, he slowly starts maturing as a runner and accepts his limitations.

Charbonneau believes that all runners fit into one of the following categories:

1. New Runners – Still trying to figure it out. Running is still hard for them.
2. Fitness Runners – Understand the benefits and use running to stay healthy.
3. The Racers – Focused on goals, keeping score, and “running addicts”.
4. Mature Runners – Have learned to compromise, know their limitations, enjoy the journey.

If you’re interested in a quick, easy read about another runner’s personal experience, this might be a good book to look into.    Charbonneau donates a portion of his sales to charity.   If you download the Ebook from his website at www.chasingtherunnershigh.com, you can even set your own price.   The suggested payment is $5.

This book is published using a Creative Commons license that allows you to share it with anyone, as long as you do not modify the file without permission or charge anyone for access to the file.

My favorite quote of the book appears at the end:

“That’s the difference between running and chemically induced euphoria.   One you can buy, the other you have to earn.   You can give up, go passive, and still drink and smoke and snort to get high.   But if you want the runner’s high, you have to find a way to carry on.   I’m going to keep running.   Sometimes I stumble across a moment of fulfillment, sometimes I get lost on the road, but if I keep putting one foot in front of the other, eventually I know I’ll find the path that takes me home.”