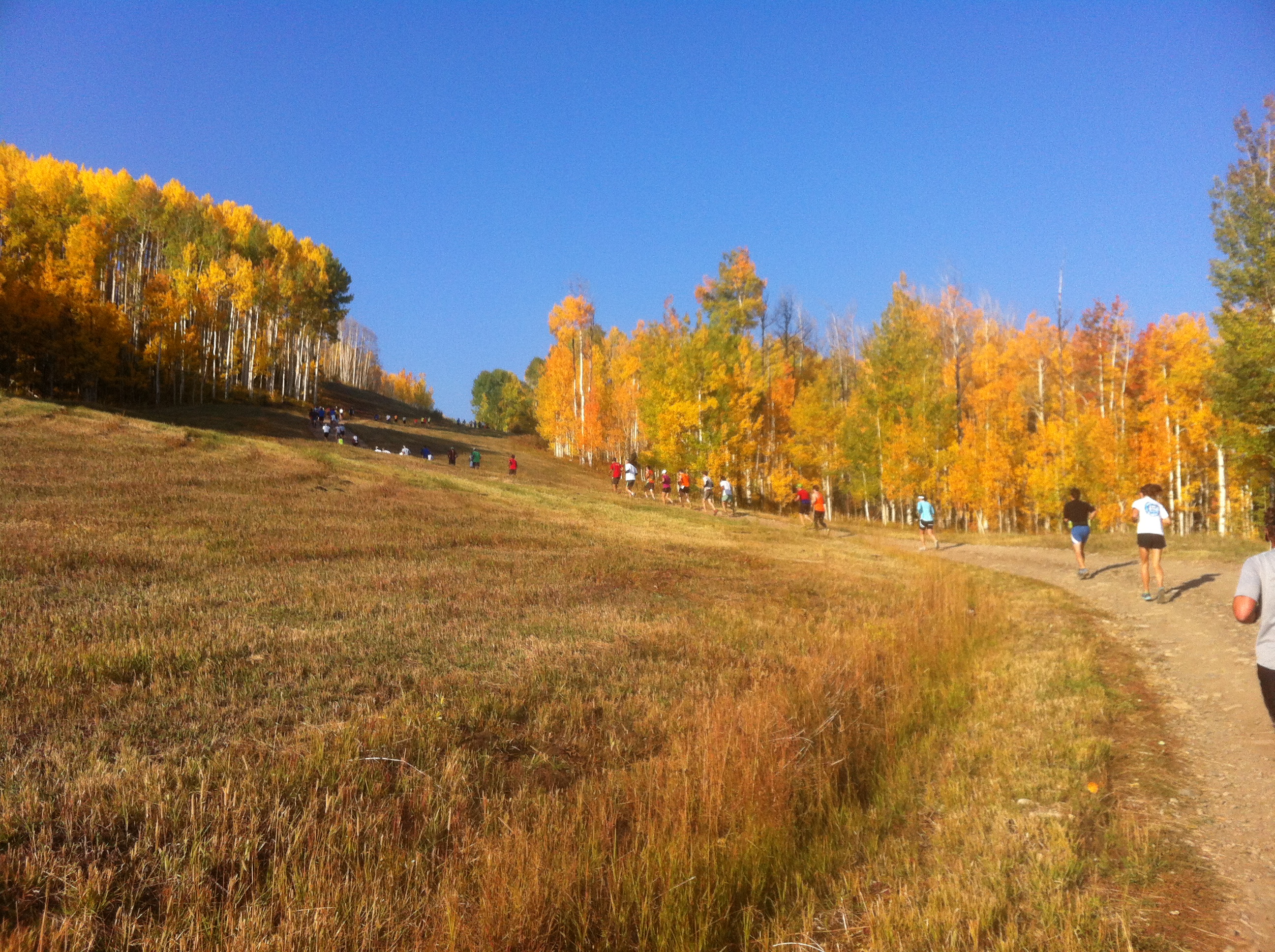 September 22, 2012 was a gorgeous fall day in Summit County.  The 34th annual Golden Leaf Half Marathon began in Snowmass and ended in Aspen.  When the starting gun went off hundreds of voices rose in a cheer to send the first wave of runners up the two-mile incline.

This is the first time I’ve run this race and will absolutely be back to do it again.  It’s well organized, well staffed, accessible and challenging.  Afterwards, the post-race food was better than anything I’ve had at a race, hands down.  I wasn’t the only runner commenting on the quality of the meal or exclaiming about having gluten-free, vegan options.

After all the eating I was ready to hit the showers back at the condo but my girlfriends were settling in, waiting for the raffle to start.  It took a few minutes for me to realize they were in for the long haul and after 15 minutes I could see why.

The raffle was one for the books.  Prizes such as $140 Mountain Hardware jackets, $70 gift certificates, hydration packs, shoes, hats, arm warmers, Yak Trax… the list went on and on… and on… and on… for at least an hour and a half.  I shifted from sitting to standing to stretching multiple times during the raffle.  Five members of our group won prizes.  If people stayed for the entire thing, there was a good chance they’d win something.  I couldn’t believe the amount of gear that was being donated to racers.  I’ve honestly never seen anything like it.

The Golden Leaf Half Marathon deserves all the kudos it gets from the trail running community, and more.  The event was fabulous from the moment the bus picked us up until we walked back to our condo with raffle prizes.

Lara: Congrats on the completion of the 34th annual Golden Leaf Half Marathon!  How did it go for you and your team?

Bob: The race went really well and organization was smooth. We had two people with the same name so that set one fellow back in a wave where he shouldn’t have been. He was understanding of the issue and we have him noted for next year. My daughter and I provide First Aid on the mountain; there was the usual amount of sprained ankles, cuts and dehydration, which is always concerning for us. We patched a few people up on the trail and called for one Evac. It’s always good that Mountain Rescue and we are out there. Mostly, we saw smiles. And to us, that’s success.

Lara: I know the race was sold out at 1000 entrants.  How many people actually started and finished?

Lara: Tell me about the Raffle Drawing.  Where do all the prizes come from, and has the amount of donations grown over the years?

Bob: Our raffle has always been big. Because we are a retailer with strong relationships, our vendors open their cupboards for the race and the same thing happens with the community. They know we are there for them and their causes when asked. But, yes, the raffle continues to grow.

Lara: What are some things that went wrong behind the scenes of this year’s race that people might not have noticed?

Bob: We need to identify the First Aide people, including Mountain Rescue, with red crosses so racers know who to go to. Some people were confused and with a little more identification I think we can remedy that issue.  The wave starts, and overall timing seemed to be on the money.

Lara: The food was fantastic.  The servers told me everything was Gluten-Free and some of it was vegan.  I’ve never been to a race that actively sought out GF and vegan food.  How did this come about?

Bob: We spend about $10 a head on food. It’s important to us. My daughter is GF and a lot of folks in town and visitors are vegetarian or vegan. We aim to please in that regard.