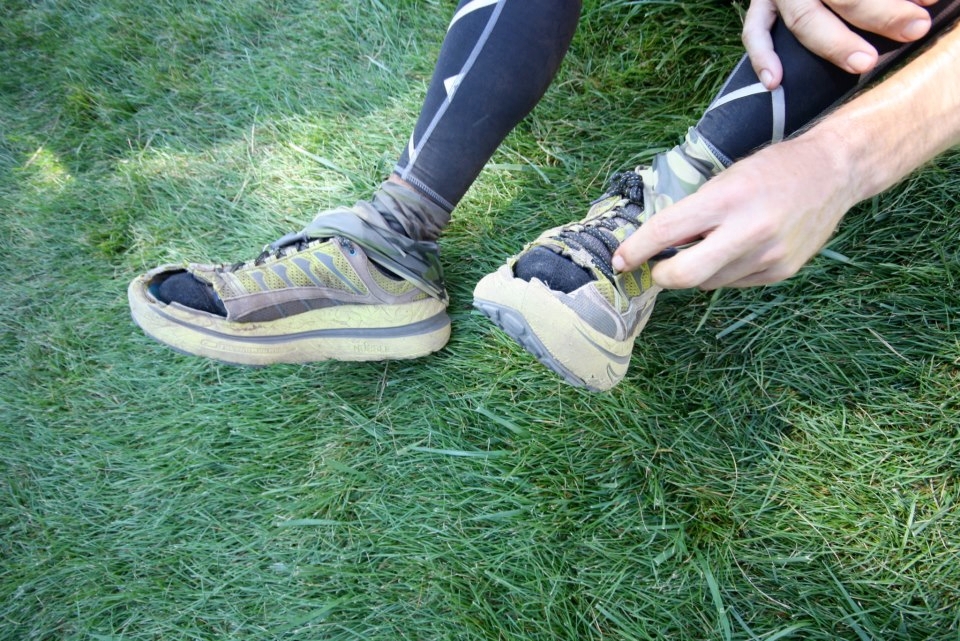 This crazy idea began exactly one year ago when my girlfriend, Yami, and I visited Salt Lake City during the 2011 Wasatch 100.  My article leading up to this year’s race is here.

The final week leading up to the race was tough not only for me but also for Yami.  I’m usually very laid back about races.  I leave the worrying to my training partner, Andrea.  Typically, I’m the “Ronco Rotisserie” of racing: set it and forget it.  But this race scared me so I fixated on it.  That focus finally got the best of me.  The entire week before the race, I didn’t sleep as deeply as I usually do which left me irritable.  I was constantly getting after Yami for petty things, and she was struggling to keep out from under my microscope.  Short training runs only relieved my stress temporarily, an hour or two at best.  A few days before the race, my crew and pacers started to arrive from Michigan, Texas and Colorado.   I desperately did not want to let them down which piled on even more stress.  Only after a major meltdown three nights before the race did I find some relief.  Yami is a true champion for being so tolerant with me.

Fast-forward to the morning of the race.  I had gotten just a bit of sleep when my alarm went off at 3am.  I had arranged access to the hot tub where we were staying.  During training, I found that soaking my legs in hot water to warm them up was a good insurance policy against IT band issues.  I knew the beginning of the run would have cooler temperatures with some faster running to jockey for position.   Those two components generally bring out my IT band issues.   Once my IT band flares up, it sticks around the entire race.

So after a good soak, I showered, dressed and ate.  Then we loaded up our 12-passenger rental van and headed to Kaysville for the start.   The time leading up to the start, the countdown and the first two hours of running were rather uneventful.  Andrea and I stayed together packed within the herd and only hopped past 10 or 12 people before Chinscraper.  The dreaded 3000′ climb between miles 5 and 8 was actually easy for us; the temps were cool and the conga line kept us moving slowly.  Plus, I can say with pride that we had developed into a couple of power hiking mo-fo’s.   Once past Chinscraper (Mile 10), the herd thinned out, and we were able to move at our own pace.  Andrea is a “hard charger” (credit term to Don Lucas of Luke’s Locker), and I let her go ahead a few times rather than nagging her to slow down.  It’s easy to charge the course from Chinscraper to Francis Peak (Mile 14.6).  It’s early in the race and the terrain is fast.  Eventually she would look back, find me a quarter mile back, pull over and walk until I caught up.  Our plan was to take 11 to 11.5 hours to get to Big Mountain aid station (Mile 40), and we were already ahead of schedule.

The hours and miles melted away and all was going smoothly with good conversation.  We were in and out of aid stations quickly, even with a shoe change at Francis Peak.  The Sessions Aid Station (Mile 30) was a smooth drive-by;  we were rolling.  About 10 minutes after Sessions, I grabbed 2 S-Caps, threw them in my mouth, took in some water and swallowed.  One of the caps was still dry and stuck to the back of my throat.  GAG!!!  HEAVE!!  VOMIT!!  SON OF A BITCH!  Once I finished, we walked for a minute or two and then came Round 2.  Vomit!  We walked another couple of minutes and then Round 3.  With all the fluids and fuel out of my stomach, I knew I would have to catch up, but here’s the catch (no pun intended): my stomach was not happy at all.  This is the kiss of death in ultra marathons.   No fluids + no fuel = no go!

Knowing we were still ahead of schedule, we took our time and made it to the Swallow Rocks aid station (Mile 35) and then finally into Big Mountain (Mile 39.4) to pick up our pacers in 10.5 hours.  In some ways, slowing our pace helped.  The temps were hot and we had conserved.  My only issue now was being behind on hydration and calories.  I was struggling to find foods and fluids I could ingest, but I tried.  Andrea found her crew and pacer and she left a few minutes before us, never to be seen again as she rocked the course in 28 hours.

Eventually, my pacer Jason and I headed off toward Lambs Canyon.   I struggled on this part of the course.   The exposure and heat will get to you on a good day.   On this day, I was so spent that I death marched as Jason dragged me to the next aid station.   It got bad enough for me to make a phone call to the crew to ask them to pick up my anti-nausea medication from home.  Jerry, my second pacer, called back and diagnosed me with electrolyte depletion.  He was right because after consuming GU brew at Alexander Springs (Mile 47) and then mixing S-Caps into water, my stomach actually started to feel better.   By the time we arrived at the Lambs Canyon aid station (Mile 53), I was severely depleted but my stomach was coming around.  Plus, the hot sun finally began to set ushering in cooler evening temperatures.

At Lambs, my crew jumped into action and outfitted me for dusk: hat, headlamp, gloves and long sleeve shirt.  Jerry made me drink 450 calories of Spiz and decided that for the rest of the race I’d be drinking GU brew.  He got me out of the chair and as we hiked and ran toward the Big Water aid station (Mile 62) in Millcreek I rallied.  I moved with purpose.  But then a new problem developed.  My feet had been moving forward in my Hokas, jamming my toenails.  Every step of the way – Ouch, Ouch, Ouch!!  The downhills REALLY F’ing hurt.  But, I put aside the pain and kept moving.

As I mentioned, I had rallied.   I arrived at the Brighton aid station (Mile 75) only 24 minutes behind Andrea.  Brighton was a long pit stop for me though.  I needed major refueling and a change of socks and shoes to help the feet.  Fortunately within 100 yards of leaving the aid station, I could tell the new shoes were going to be worse so I spun around, put on the old pair, and finally moved up the mountain.  On the back side of Catherine’s Pass we ran into a group who thought they might be lost, so we waited as one pacer made a call to Net Control while the other pacers fanned out to verify the route.  I sat on a log trying to look at the map on Jerry’s phone but nothing made any sense.  Eventually, we determined we were on the right trail and moved out.  At the Ant Knolls aid station (Mile 80), I banged down half a huge pancake and rallied again.  At the Pole Line Pass aid station (Mile 83), my feet were so bad that Jerry borrowed a Leatherman and scissors to cut off the tops of my shoes.  Problem solved.   I was running again.   All along the way, when I found food I could tolerate I would have huge rallies and run.  And I mean run… passing loads of people.

As we arrived at the final aid station, Pot Bottom (Mile 93), I was spent again.  I sat for a few minutes and decided it was just time to put this bitch to bed (an Andrea favorite phrase).  We power hiked uphill for 2 miles then dropped onto a jeep trail that would take us the final 5 miles.   Jerry and I moved with grace along the cobble stones until we hit the final single track.  I pushed a sub-8 pace until we ran into Yami.  From there, I ran half mile stretches hard then walked for 30 seconds at a time.  We continued this all the way to the finish.  My final projected finish time was 31 hours.  I had shaved 35 minutes off of that, coming in at 30:24.  That was the fastest per mile segment I had run during the entire race.

I was surprised when people swarmed me at the end.  They were so gracious and kind.  I love all of you who came over to congratulate me.  Shortly after I crossed the line I sat down, took off my shoes and socks and let everyone see my feet.  People were somewhat awestruck and horrified.  As more people arrived to look at the freak show, someone said I was famous.  My left big toenail had so much fluid underneath that it appeared ready to simply come off.  John Stevens (Andrea’s husband) retrieved his medical gear and proceeded to relieve the built up fluid.  I proceeded to pass out.  Andrea, Yami and Craig Lloyd sat and watched the whole disastrous show.  I should have charged admission.

Post medical treatment, I laid down then sat in a chair for a few hours.  My initial feelings were not pleasant.  I was spent, tired and severely depleted.   I thought about the misery I had just endured which felt mostly like it was a really stupid idea.  I was proud as hell but so physically and emotionally exhausted that I couldn’t muster any excitement.

Two days after the race my left kidney inflamed, and I started to retain fluid in my feet.  Since I don’t have medical insurance, I was a bit alarmed.  I was still peeing and it was clear so my friend Missy (NP) suggested I wait it out.  In the middle of the night I woke up drenched in sweat and when I tried to move it felt as if someone had cracked a 2X4 cross my back.  I managed to open a window for fresh air, get comfortable and pass out.  I woke the next morning and problem had run its course.  Although I didn’t take in a lot of water during the day, I was peeing volumes.   Something had gone awry inside of me and thankfully it had corrected itself.

My current mental state is much, much better.  I’m still proud and almost amazed at my fortitude.  I see now that only 100% commitment during the race will get you across that line.   I’m also happier about having run the race.  This morning I even eyeballed a couple of softer Fastest Known Times (FKT’s) that I’m interested in tackling.

Finally, I want to say thank you to all that helped me along the way.  My crew Yami, Roxanne, Jason and Jerry.  Especially Yami who endured more of my shit than anyone.  Andrea, you are the best training partner ever.  I still cannot imagine how my training would have gone without my wonder twin.  Also, thanks to all the wonderful people that I met in and around Salt Lake City.   If you are from Salt Lake City and we’ve met then I love you and thank you!