Krissy Moehl is not only an extraordinary female athlete but projects that sense of community and family our sport has.  While being kind, unassuming and open, she talks about giving back to the sport that has given to her… a life she’d never imagine.
For those who don’t know of Krissy Moehl, let me quickly introduce her.  She’s an Ultra Marathoner living and training in Boulder Colorado.  Originally based out of the Seattle Washington area, she’s won some of the greatest races in the world.  But, you’d be hard pressed to get that out of her so we’ll brag for her.  She’s won HURT, UTMB, Hard Rock and the San Diego 100 while setting course records along the way.  In addition to her racing, Krissy is also the Race Director for the Chuckanut Ultra.  Her most recent accomplishment is the Fastest Know Time (FKT) for the Zion Traverse which was crewed and supported by her sponsors Patagonia and UltraSpire.

This year she returns to Hard Rock and UTMB but also adds Western States to the mix. You go Krissy!

We took some time with Krissy last week to talk about the Zion Traverse, her life and lots of other random stuff we decided to throw at her.

MK: So, congrats on your recent FKT for the Zion Traverse.

Krissy:  Thank you.  It was a really fun thing to do. It was kind of an independent thing but knowing Luke (Nelson) was out there going through the same thing made it easier. (Luke Nelson set the male FKT at the same time).  Also, the support of UltraSpire and Patagonia made it a great couple of days.

MK:  So give us a day in the life snapshot of Krissy Moehl.

Krissy:  I often wonder if people think how great it would be as a professional athletic.  Like maybe I get to run, train, eat and sleep.  In many ways it’s much harder than when I worked full time.  Some days I’m at the computer for 12 hours straight and working until I’m cross-eyed tired.  Other days it is all about the running and training.  I definitely have more on my plate than before.  There’s been a lot to learn:  forming an LLC, doing your taxes, etc.  But, this month is my two-year anniversary of being on my own and I like the freedom of setting my schedule… even though I find myself working harder and longer than before.

MK:  So what are you excited about right now?

Krissy:  Earlier this year we ran the 20th edition of the Chuckanut 50k.  Having all the people who have been there for years, and who’ve been supportive, was very special.  Doug McKeever the original Race Director, Ma Moehl, Ellen Parker Co-RD and my former roommate Kathleen Egan.

Going forward, I’m excited for the challenge of Western States, Hard Rock and UTMB all in the same year.  I guess people call these slams and I’ve got my own mini slam going.

MK:  OK, a quick break before we continue… rapid fire Q & A…

Krissy:  Massage and Acupuncture – I use both

Krissy:  Veggie but I eat everything

MK:  Trekking Poles or No Poles

Krissy:  Tent, but actually I have a Honda Element I love sleeping in.

MK:  Tell me a little about your relationship with your Sponsors.

Krissy:  I feel really fortunate to work with brands that are actually there with us at events and not just putting their names on products.

The cool thing about doing the traverse was that photographer Fred Marmsater and Patagonia got on board to support the event and UltraSpire was also there to crew with 4 or 5 people taking the day off work to help.  We were up by 5am on the first day to catch first light for a photo shoot the day before running the Traverse.  On the day of the Traverse, we were again up at 5am to catch first light.

First Endurance is also there at races and Udo’s Oil has really supported me and other athletes over the last couple of years. 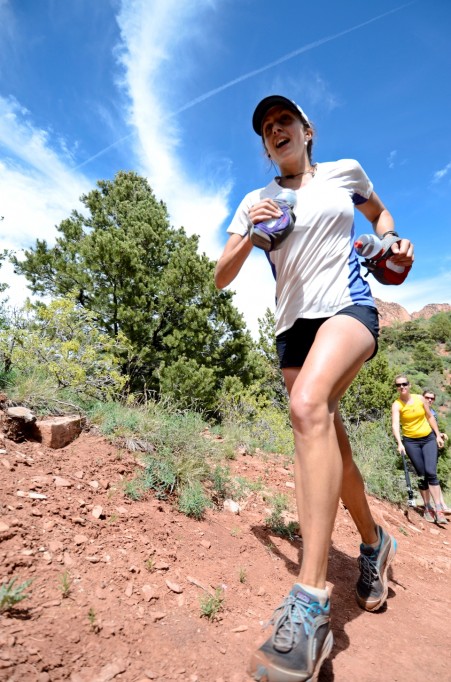 MK:  What are 3 things you won’t compromise related to your running:

2. Sleep – although I do and I shouldn’t

3. Training – but you can’t train well without the other 2.

MK:  Tell us more about your nutrition and diet.

Krissy:  Now, I eat what I feel my body needs.  My body gives me all these little clues and if I listen I can do pretty well.  But, I will try new things.  I tried Paleo last year before a race and bonked, people said I hadn’t given my body enough time to adjust to the diet.

MK:  Finally, tell us something we don’t know about Krissy.

Krissy:  Oh, I don’t know.  I feel like I’ve been an open book.  I gained so much from people in the sport that I want to help and encourage others so I put a lot of myself out there.

Ok… I would have never guessed this would be my life.  I have a degree in Romance Linguists and a minor in Spanish. I  saw myself becoming a flight attendant with hopes of traveling the world.  Well… I guess I found a much better way to travel the world (laugh).