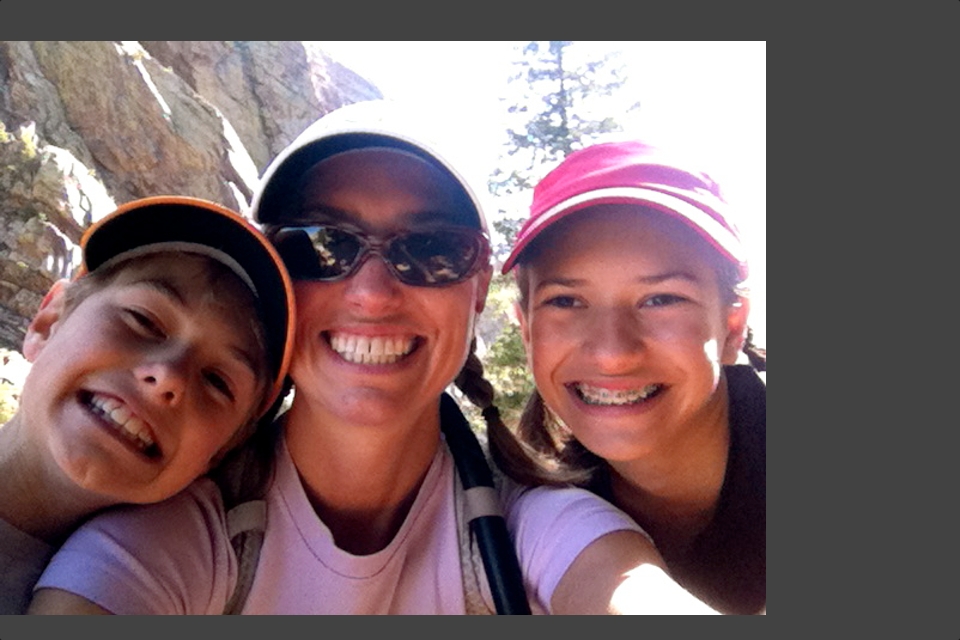 Last night Sophie said “Mom, can we go for a run tomorrow morning?”

My ears perked up.  The obvious answer was YES.

We made a plan to go to Doudy Draw where my usual Saturday Morning gang was running.  I told them that we would run/walk the trail, go as far as we liked, then turn around.  It was OUR day and we had no time constraints.

Sophie and Connor are 12 and 9, respectively, and just finished out their 6th and 3rd grade years.  They’ve hiked trails before, and Sophie just finished her first season of middle-school track.  I had no idea how this was going to go.

We reached the trailhead at 7:05am; the Saturday Morning group was still standing around.  Kathy took a quick picture of us before the mass of humanity headed onto the trail.

Connor led the way.  Bobbing along in his bright orange hat, he took off like a colt from the shoot.  A few of us chuckled; he would wear down soon enough and I told the group that we would be hiking soon after the energy spurt wore off.

Ten minutes later we stopped to let Connor catch his breath.  Sophie had been easily jogging along at a good warm-up pace but Connor was winded and had a side cramp.

I broke out the Honey Singer Chews, fed and watered my children and took off again, this time at a more reasonable pace.  We saw the ladies one last time as they hooked up the side of the ridge.

It’s amazing to see your favorite trail from the eyes of a new trail runner.  I got to tell them about the gentle hills that were coming, where we would walk if it got too hard, and where the terrain flattened out again.  I told them about the mesa and how the wind would whip through there and how we would run for the trees to find shelter.

Connor got his breath back and chattered away.  At one point I told him to save his breath for the hill; I think he stopped talking for about 2 seconds.

We got to the fire road at the top of Spring Brook Trail and paused again to look at the water flowing through the ditch.  The road is relatively flat at this point; all the significant climbing is done.  We meandered along, checked out the rock faces and noticed a place where lightning struck and burned a small patch of trees.

At one point Sophie paused to look at a flower, then ran to catch up.  I turned around to snap a picture of her.  She saw it and said, “I look just like you, except with longer legs!”

I carried the hydration pack with about 50 ounces of water, along with a pack of Honey Stinger Chews and a Honey Stinger Chocolate Raspberry 20g Protein Bar.  During the run whenever someone got tired I gave them a little something to munch on, which kept their energy up.  At one point I noticed that I was getting hungry; after 4.5 miles I don’t usually feel ravenous, but this was also a slower pace than I’m used to and we had been moving for about an hour and twenty minutes.  I pulled out a Gu that I knew neither kid would want and sucked it down, saving the real food for them.

I’m amazed at how easy the run was today. They were both dressed for the 50-degree early-morning weather; hats, sunscreen and shorts.  Sophie wore a race t-shirt of mine along with my arm-warmers; Connor wore a wicking t-shirt along with a lightweight long-sleeve.

The key to this run was to have plenty of time to take it at our own pace.  I didn’t have any agenda for being back at the car at a specific time.  We had food, water, my iPhone camera and each other.  It was a beautiful day and now that I know they’re up for the challenge, we have an entire summer together to explore the trails and mountains!