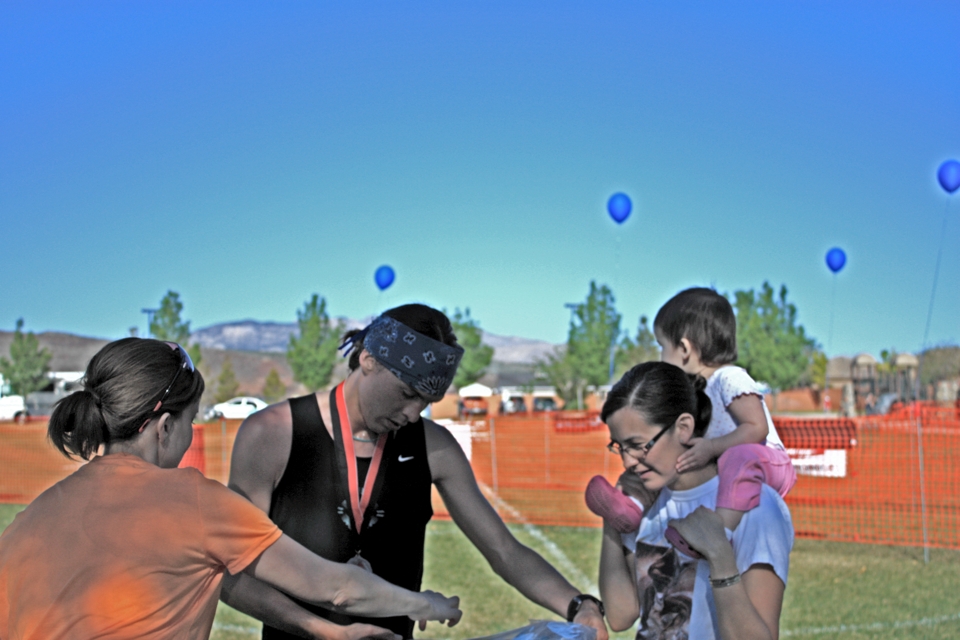 It’s the night before the Red Mountain 50K ultar marathon and we’re rolling down the street in our motorhome wondering where we’re supposed to be.  Right from the side of the street appears Jeremy Frehner.  “Hey Mark, you found us”.  He has a spot all scoped out for us.  “Go ahead and get settled and we’ll be up here”, as he points to a trailer and the activity 50 yards across a field.  We coast all 65 feet of motorhome and tow car into place and I head over to grab some quick notes about tomorrow’s race.  As soon as I walk up Jeremy and Phil are there to greet me and proceed to focus on our time together, amidst all the other things they have left to do.  This is just the way they operate; they’re there for you… the runner, the family, the friends, the volunteers, the sponsors.

Jeremy Frehner, Adriane Frehner & Phil Packard make one heck of a team.  I’ve never seen a group so in sync and so positive.  It’s gonna be hot… they make sure someone is assigned to haul additional water to the aid stations.  Short on some shirts sizes… they’ll have them after the race to trade.  Lights go out at packet pickup… call the city manager, he’ll know what to do.  There’s seems to be nothing you can throw at these guys that isn’t responded to immediately and nicely.

On top of their cool, calm and collected selves they live their motto, Races Run by Runners.  Medals are fantastic, the shirts are sweet, the aid stations have all you need, post race food was excellent AND they started the 30K early!

From my time with Phil, Jeremy and Adriane I learned that RedMountainRunning.com puts on 5 races per year, ranging from 5K to 50K.  This particular race, the Red Mountain 50k & 30k, is the fifth year for the event.  Red Mountain works closely with the City of Ivines, which is located just outside St. George Utah.  Phil said that the City has been a wonderful partner, fully supports them and they couldn’t do it without the City.

When asked what he’d like to add about the Red Mountain Running, Phil was quick to say,  “The volunteers are phenomenal.  They include friends, fellow runners and a local school for troubled youth.”  I can attest that the volunteers were awesome, including my favorite stop where all 4 women volunteers were dressed in full on costumes.  Nothing like running down a mountain, wondering if the heat has gone to your head as you see an eclectic mix of characters in the distance.  Puts a smile on your face.

One final note to highlight the quality, character and caring of Red Mountain Running.  They put together something beautiful to honored a fallen runner who tragically passed away during the week… Thayne Hansen. Thayne’s close friend, Shane Stevens, wore his race number while Paula, Thayne’s wife, launched blue balloons at the start.  Jeremy, Adriane and Phil also lined the final 50 yards of the course in blue balloons. There was a sign available for all the racers to sign and it was presented to Paula.  Blue Ribbons were handed out for people to wear and Paula finished the race with Shane.  It was touching to see Paula and Shane run down that row of blue balloons.