Notes on the Wasatch 100 Ultramarathon

On May 20th of this year, Doug Masiuk started running from Golden Gate Park in San Francisco. Since that date, Doug has been running eastbound, with intentions of running across the continent. If he succeeds, he will not be the first to run across the USA. (Over 200 people have successfully crossed the continent on foot.) But, he will be the first to complete the run with daily injections of insulin. Doug runs with Type 1 diabetes, an auto-immune disorder he developed when he was just a small child. Doug’s pancreas does not produce insulin. With this chronic condition, Doug must manage more than just the consumption of calories for his running. In addition to fueling with endurance nutrition and proper hydration, Doug is managing his blood glucose levels on the side of the road with a finger stick blood test. He has to inject insulin daily and make adjustments that not only keep him running, but also keep him alive.

Type 1 diabetes is often misunderstood by society at large…this is not “Type 2” diabetes, which can be acquired through poor lifestyle choices. Doug does not have a “reversible” form of the disease. Having said that, endurance athletes with Type 1 diabetes are very rare people. They are inspirational, not only as athletes, but also to the diabetic community for their perseverance and demonstration of what is possible.

Doug shared that he originally sought to run across the continent for personal reasons…for the adventure, etc. But, when he shared his story, many people reminded him how important his run would be to the diabetic community.  Based on that feedback, Doug developed a website where he and Dan could share the journey as it unfolded. That, according to Doug, has been the most fascinating thing about the run. Doug told me, “Now this run is about diabetes.” 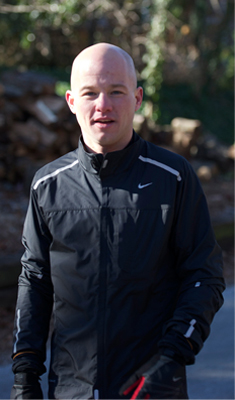 Doug Masiuk in the months prior to the transcontinental run.

Along the run, Doug has openly shared his story with strangers. Where might we ask? “Truck stops, Walmart, elementary schools, diabetes camps, anywhere they’ll listen.”

Without a corporate financial sponsor, Doug has covered 1,400 miles on foot from San Francisco to Colorado. He has accepted small donations from individuals and small businesses. That has allowed him to eat and sleep inside on occasion.  I have followed Doug’s run as he made his way across California, Nevada, Utah, and Colorado. When Doug arrived in Colorado, he contacted me and we arranged to meet.  Doug and his small crew “marked” his current location with GPS and drove to my house where they recovered and rested.  Doug was in high spirits, despite the 1,400 miles through summer heat.

Doug’s primary crew support through the run has been Dan Lynn, a friend and documentary film maker. Dan has been filming Doug throughout the journey. Dan shared some of the video clips with me so I could edit a short video about their journey so far. I think this short video will give you some idea of the epic journey so far. Please enjoy the video, and share with others…You can continue to follow Doug’s run at http://onerun.org/

Ultrarunning the USA: Doug Masiuk from Jerry Armstrong on Vimeo.