Back in October, I introduced the readers of TAUR to the Journey To 100 Miles series. I not only outlined my plan to run in the 2013 Vermont 100 Mile Endurance Run, but my plan to run it in a PR time of 23:18 or faster, and my plan to weigh 155 lbs. (losing 20 lbs.) by race day. My mission was to chronicle my journey as a way to offer our readers guidance in their own journeys to 100 miles, and it was directed towards everyone:

Then there was the WHY:

WHY?
There are many hard lessons I’ve learned the last 2 years in ultra-running. I’ve learned:
…You cannot fake 100 miles
…Your base training has a shelf-life
…All of this is better with a support system
…You can never learn and share enough in this sport
…We’re all an experiment of one
…I could have always used more guidance myself
…Maybe diet does have something to do with ultra success

In today’s post, I wanted to take a step back and update everyone on my progress through the plan I’ve outlined over the last few months. Posts thus far have included:

And now, the update.
I started my training on October 16th when I weighed in at 173.6 pounds. Down just a few pounds from the 175 the scale read on October 1st. It is very near to the most I’ve ever weighed in my entire life. My plan was to weigh 155 lbs. by the Vermont 100. I was unsure how I was going to lose 20 lbs in time and the task, was certainly daunting. But like any ultra, you have to have the guts to start. I drastically changed my life style, and started with my eating habits.

It’s been an interesting journey for sure. The picture below, was taken in October, and was very telling to me. I had just returned home from a 3 mile run. I was winded and looked like the quintessential “Mouth-Breather.” I had gone to the store that week to buy some new pants, as none of my other pants fit me anymore. My waist size was up to 34″, and I wore a belt with my new pants even though I didn’t have to. I felt awful. Depression was settling in again. To bend over and pick something up off the floor I had to hold my breath. I looked as awful as I felt.. and I knew something had to give. That 3 mile run was actually a challenge too!

People automatically think that just because I run ultras, it’s “easy” for me to lose weight, or that I’m all ready in great shape. The truth is, weight loss for me has never been an easy feat. In April 2000 I weighed 180 pounds. To this day, it is still the most I’ve ever weighed in my life. I have a picture of it, and I chose not to ever share it. It’s embarrassing. I didn’t start running until 2004, and by October 2007 I was down to 145 pounds, the lowest I’ve ever weighed. It took me quite a long time to lose all of that weight back then, certainly not 3 years, but it wasn’t easy. This past Friday, before traveling to Kansas for my first 50 miler of the year, the scale read 154.6 lbs. I made it to my goal weight, and beyond, months early. I’m wearing pants with a 32″ waist that I haven’t worn in years, and I’m wearing a belt with one of those nifty buckles I’ve earned to hold ’em up. 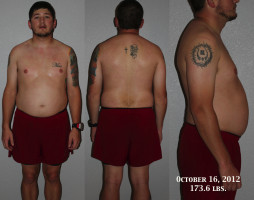 Over the last few months I’ve done my grocery shopping at quite a few places. Sprouts, Target, Walmart, Costco, King Soopers. My overall food bill is marginally cheaper than what it used to be. Take out all the fast food and eating out, and I save a good $100-$150 a month. Stop buying overly processed foods at the store, I save $100 a month or more. Now I buy lean meats, frozen berries, fruits, vegetables all in bulk. I’m still making a green smoothie for breakfast every single day. Even while I was on vacation.. I’ve stuck to it. It’s all about the choices we make, right? Gone are things like sugar, high fructose corn syrup, soda, chips and other snackies, fat/greasy over processed concoctions that were never meant for us to consume. To read more about my diet, you can go to my personal blog and read two posts associated with it all. On Dieting-Part 1, and On Dieting-Part 2.

The other part of this update, is the running. I could talk for the better part of a day about my diet, how it has benefited my life, how great I feel, etc etc. But this is a running site after all. I’m sure you’re wondering, how does this all translate into my running and what are the results??

I took a huge step-back and looked at my training numbers over the years. Like most ultra-runners, I’m an OCD/Type-A individual who keeps track of everything. I’ve logged every single training mile since 2006. I knew that someday down the road, when things get rocky, this information will prove to be a valuable asset when trying to adjust my training, or to get back into top physical condition. So, year by year I looked at my training numbers. I looked closely at the number of miles I ran in training, and my race schedule leading up to the Vermont 100 in each of the years I’ve run it previously (2007, 2008, 2009, 2010). The numbers were pretty black and white to me, and were a huge indicator of my performances over the last 2 years. (You can read my By The Numbers posts here: Part 1, Part 2, Part 3) 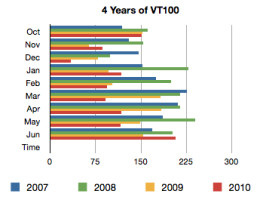 Above is a graph depicting my training, and racing, miles leading up to the Vermont 100 in the four previous years I’ve run it. My finishing times were 23:19, 23:37, 23:27 and 28:58 respectively. It is easy to see that in the three years that I trained methodically for the event, my success was pretty spot on. In fact, I had acquired a nickname at the event during those years of “Mr. 24-Hours.” I knew exactly what needed to be done to train for, and finish, the race in under 24 hours. It was like clock-work. Then in 2010, I signed up for the Grand Slam of Ultra Running. I showed up to Vermont some 3 weeks after finishing Western States. A cocky little SOB, I showed up relying on my “base training” to carry me to the finish line of these 100-milers, and Vermont was the race before my epic Leadville crash and burn. In looking closely at these numbers, I knew that I’d need to take my training back to where it was in 2007-2009. If I was going to PR at the Vermont 100, I needed to get back to training as close to perfect as I ever have. 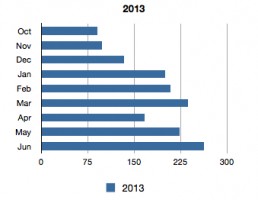 The above graph shows my training miles from October through the end of June, which is my training period for the Vermont 100. For the months still to come, the graph represents my planned miles in each month. I used October, November and December to run easy and build base miles again. Some might call it Maffetone training, I just call it, “running at conversation pace.” It was more about getting out to run, getting into a rhythm, and into a regular running schedule. By the time January hit, I was thrust into my yearly Streak challenge, where I try to run at least 2 miles, every day, for the entire month. By the time January ended, I was well into a routine, feeling great, and watching as my average pace (and weight) dropped. In October, my average pace for a 10K training run was 9:30 min/mi and by the end of January, it had dropped to an average pace of 9:00 min/mi.  Now, at the end of March/Early April, my average pace has dropped to around 8:30 min/mi.

At the end of February, I came in 4th place at the Twin Mountain Trudge 22 miler in Wyoming. This past weekend I drove to Kansas to run in the Rockin’ K 50 Mile Ultra, my first ultra of the year. In looking back at my 50 mile results over the last two years, I was reminiscent about how I’ve DNF’d, or arrived at the finish line a haggard back of the packer. No, you can’t fake an ultra, but changing your diet and following a regular training routine can take you a lot farther. This past weekend in Kansas, a slim and trim Sherpa John came in 6th place with a time of 9:54 (21 Starters). I was pleased with my results, especially in having run an extra 3 miles on the course (lost).

I’m writing this update because, when I started the Journey to 100 Miles posts here on TrailandUltraRunning.com, I wanted to help others reclaim that magic they once had. I wanted to inspire the new comers to achieve a personal milestone, greater than what they think they are capable of. As a running society, we ogle and gawk at those runners who put in 100-200 mile weeks, we buy the same shoes they wear, use the same gear, eat the same things we “heard” they shove down their throat. However, at the end of the day.. we forget that we’re all an experiment of one and the things that really work for ourselves. Running, is not rocket science. It’s still just LEFT-RIGHT-REPEAT. But with a better diet, and a well thought-out training plan that one follows, Anything is possible. After all, 90 Percent of this sport is mental. I’ve been doing this long enough (8 years) that I know what works and painfully what doesn’t. I’ve never had an injury beyond under-trained or burnt out. This past weekend in Kansas, I ran just as good, if not better, than runners who put in 100+ mile weeks. While I’ve only run 50-60 miles per week for the last 3 months, it’s the plan that I’ve followed. It’s the plan I created and executed on race day. Sure, some of us are born with a natural talent to excel at this stuff, but at the end of the day, you can do anything you put your mind to. Human Potential is within us all. 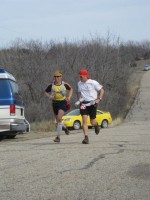 If you’ve enjoyed this or other posts in Journey To 100 Miles, please consider a small donation to my Vermont 100 Fundraising Efforts. You can read more by clicking HERE

One Response to Journey To 100 Miles: UPDATE