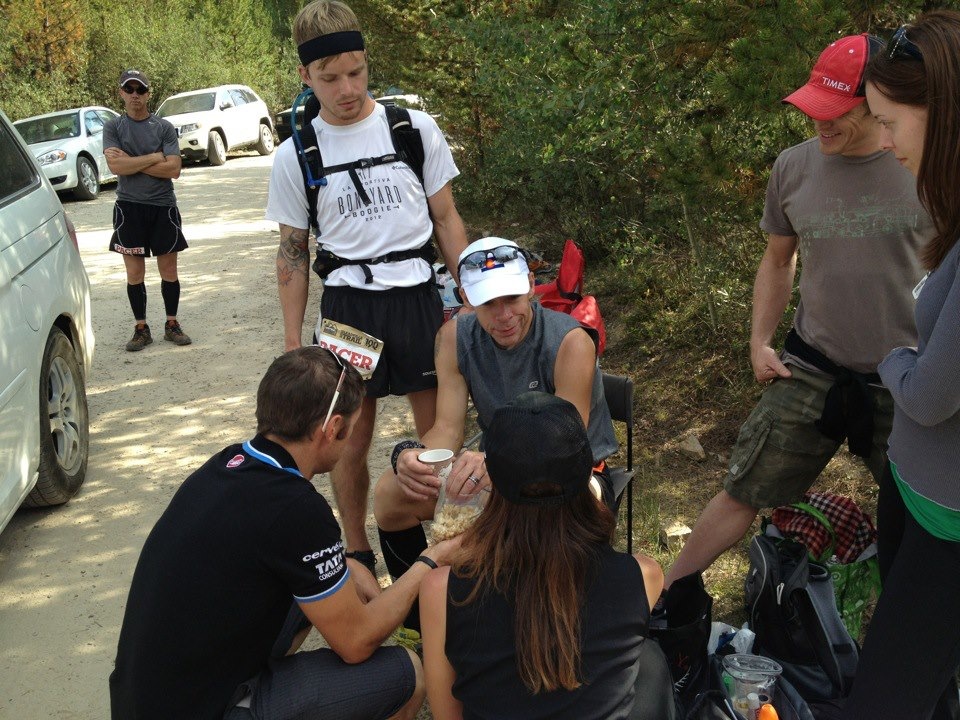 TR Maloney has completed six 50-mile races in the past year as preparation for the Leadville 100, including the Leadville Silver Rush 50M.  He had an incredible crew and three pacers that joined him on the trek over the mountain.  In the pre-race interview he discussed essential gear; here, we find out if it worked for him or not

He’s taking a break from racing at the moment, though we’ll be seeing him on the trail again soon!

Next race on the calendar: None. I am on break and not sure what is ahead.

Lara:  What was your finishing time?

Lara:  What was your favorite moment in Leadville?

TR: Seeing my crew and pacers. They were so positive and made me feel like I could keep going even during those times I doubted myself. Running in with them to the finish line will be a memory I cherish forever. The ultimate was hugging my wife after crossing the finish line. The emotions were so real and it felt great to be held up (literally) by the love of my life.

Lara:  What Aid Station stood out for you the most, in that you were looking forward to getting there or it was incredibly special because of how your body was reacting?

TR: The Llama station was the one that sticks out most. On the first trip I was mistaken thinking I was at the top when I sat on a log to eat some mashed potatoes among the beasts. I looked up and saw dots working there way to the real top and wanted to vomit…

On the 2nd trip up and over I was happy to dip down to the Llamas and have a cup of coffee. My pacer brought some Starbucks Via and made me a special treat. The bonus in that cuppa joe was finishing that killer climb.

Lara:  What kind of gear did you carry that worked great during this distance?  Did you have any trouble with anything?

TR: I was good on gear. I did have a custom insole go bad on me (I knew it might) and I was happy to change shoes at the turn around. After training/racing for months with two hand held bottles I was surprised how good my pack felt as I went up Hope Pass for the first time. In the past my shoulders have screamed when I held bottles and all that went away with the pack. Lesson learned!

I also had 12 Headsweats hats and changed them out often. Beanie to visor to visor to hat to hat to beanie. It all depended on sun and temps. My favorite Darn Tough socks worked great. I switched socks after the stream crossing just to play it safe so my feet didn’t get soft or prune and didn’t have a single blister all day!

Lara:  How was your nutrition?

TR: I drank Infinit Nutrition for 27.5 hours. I did eat some Honey Stingers and Mashed Potatoes. But mostly it was the Infinit. I also planned on eating a special burrito of Soy-nut butter and chia but my stomach was having issues and that was not the texture it wanted. Surprisingly I did enjoy some Kettel Korn popcorn. It’s sugary and salty all at once…sooooo good!

Lara:  How did the Leadville 100 compare to other Ultra’s you’ve done?

TR: I ran six 50 miler’s in prep for Leadville. Leadville was a whole new level of Ultra, mainly because it took my crew to get me to the finish line. I am not one to ask for help and having a whole team catering to me was hard to get used to at first. I think the only way to really prep for a 100-miler is to run a 100-miler. I learned so much about my mental side that just doesn’t come to play on a 50-miler. So…that means I will have to try another 100-miler to put my experience to work. Luckily the altitude did not bother me at all.

Lara:  What would have done differently during the race?

TR: I wish I started slower. The 4am start meant it was dark and I was really excited. Next thing I knew I was running with Jerry Armstrong and I have no business running with that stud. Within a few miles I cooled my engines and slowed down. If I do return to Leadville I will work on climbing more; ascending was a weak area for me. Two months ahead of Leadville I hurt my foot and could not descend so that meant I could not ascend. That left me training on roll terrain but not up in the mountains.

Lara:  Was there a person that was either physically present or that you carried in your mind during the race that gave you motivation and energy to keep going?

TR: My whole crew was amazing. After some slow and tough times in the middle of the day I came to my 2nd pacer realizing I might not finish under the cut-off. I was mathematically going to be 10-15 minutes too long. I told Ivan (2nd pacer) that I didn’t think I was going to make it and he snapped me out of my funk. We tore up Powerline like it was the first few miles of the race. Ivan estimates we passed 40-50 runners in 10 miles. I picked him for that point in the race because I was guessing I would be low on power and morale and he’s just the Irishman to kick me in the ass. Which is exactly what he did. We were flying (relatively speaking for a 100). Of course I relied heavily on my other two pacers (Chris and Dave) and they brought their own talents to their turns. I will never be able to thank them enough. My wife Lisa is my coach, masseur, cook, teammate and team leader. Without her I wouldn’t have come close to achieving half of what I did in one year: Aspen Marathon, Run Rabbit Run 50, Pony Express 50, Rocky Raccoon 50, Fruita 50, Wyoming Double Marathon (52.4), Silver Rush 50 and Leadville 100. All of those races in under a year made possible by the support of my wife. I love her!