People see failure in a lot of ways. And who’s to really say who’s to judge (if I missed a “whom” moment there then you can see me as a failure). For me, I have a certain criteria of what failure is and how it can be fixed.

Failure to me is not making the most of your life and health. When I was younger I was a huge failure. I was lazy, fat, smoked and drank through high school…as in before class, during class and after class. My favorite pastime was sitting on the couch in a haze while life rolled past. Little did I know then that I had a stupidly monstrous engine and loved to suffer by running all night. I was a failure. I gave away so many years of adventure and God knows what else because I sat on my ass and wasted my young life.

So…sitting on one’s ass all the time is now a pet peeve of mine. This is why I hate…and I mean REALLY HATE video games. Couch slugs sitting in their own haze stoned on Assassin’s Creed with their mouth open, mentally shut off to the real world. I just look at the people playing them and think…really? You’re a little warrior on the screen and you push a button to shoot things…for real? That’s what you do for hours on end? 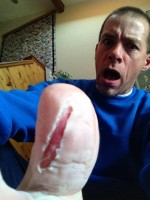 You want to play a real game? Try running. In our world you move your legs with muscles not buttons and run up mountains and cross streams up to your ass in freezing water. You jump over rattlesnakes that will kill you…FOR REAL…there’s no “play again” option out here if you screw up. You can fall and break skin, bones and dental work. You don’t just get another life for jumping up and grabbing a mushroom. Out here you earn every inch without a turbo boost.

You want competition? Try beating your time (or good lord, Anton’s time) up Green Mountain. Give it a shot and then go up it again. Maybe take a different line on the switchbacks or start easier and gas it later. You seem to like to run through the same damn mythical castle all day…so this should be fun. This is what it feels like to really play.

You want suspense? For us out here it’s called bears and mountain lions. They are real and real fast. Out here we are not covered with armor or carrying some huge machine gun…we are only carrying water. Your full Kevlar body armor and matching helmet seem a little sissy-like to us out here. We wear shorts and shirts made from the thinnest material possible.

As for “killing” or “blasting” someone…we set out to do it all the time.  From lunch runs to big races we have a target in our minds and we are set to destroy. You want a fight? Pin on a number and toe the line. Let’s see who’s standing 8 to 15 to 24 hours later.  I’ve seen them cry, break, bleed and collapse. Out here…it’s for real.

So yeah, I hate video games.  Super warriors and super heroes my ass. My cape is made of paper and held on by pins. My technical weapon is a pair of running shoes. My bat-signal is the sound of a starting gun and the war I am waging is against the lazy, fat and the complacent. You want my respect? Get your shoes on and join me out here. That couch you’re sitting on…it’s a coffin. R.I.P.

“I wish I played more video games” – said by no one on their deathbed.

6 Responses to Running from Failure