One of the most powerful ultrarunning stories I ever read was published in the book, “Running Through The Wall”, by Neal Jamison. On page 127, ultrarunning hero David Horton shared his story of successfully finishing the 100 mile “Barkley” ultramarathon (2001). Horton, among the very best ultra-distance runners of all time, was well-versed in the most difficult events of our endurance subculture. Horton successfully completed epic crossings of the United States, Pacific Crest Trail, and Appalachian Trail. At the time this book was published, Horton had completed over a hundred ultramarathons. In his story, Horton openly shared his thoughts on the Barkley Marathons.

Horton wrote, “Man cannot enjoy that which he acquires without hard work and toil. And what do we enjoy the most? The things we work the hardest for. That’s why I enjoy Barkley. It is the hardest thing I have ever had to achieve.”

The “Barkley” is ultrarunning legend…like a nightmare imagined for the very sake of destroying hopeful athletes. It’s race history is rich with dark humor and the impossibility of it’s completion. For 25 years, the Barkley has “eaten its young”. For these reasons, it is extremely exciting to be witness to the developing film documentary about this sinister beast they call Barkley. Now, you will have the opportunity to watch this nightmare play out, from the safey and comfort of your cozy living room.

I am happy to share my interview with the producers of the documentary about the Barkley Marathons, Tim and Annika.

Jerry: Good morning! Thank you so much for your time. I am so excited to interview you about your documentary in production, “The Barkley Marathons-The Trail That Eats its Young.”

The “Barkley”, as it’s commonly referred to in the ultrarunning world, is an ominous beast of a race. We openly accept that the Barkley is not a race, at all. The Barkley is a quest…a true test of endurance and character. Many in the ultra world are not truly informed of the magnificent challenge presented by this monster event. For these reasons, I was excited to hear that you were making a film about Barkley. Can you briefly share how the idea of a Barkley Marathons documentary came about?

Annika: We read Leslie Jamison’s article, “The Immortal Horizon,” about the Barkley in the Believer Magazine. Not being runners ourselves, we probably would have never come across the race had it not been for her engaging storyteller’s perspective of this quirky, almost impossible, and uniquely intriguing challenge.

We almost exclusively work as camera assistants for other people’s projects but, the more we researched the Barkley Marathons, the more enamored we became with its history, participants, and stories. We feel lucky to have this be the film that struck us out on our own. It’s a perfect subject to explore with a documentary and we were honored to do so with the race director, Lazarus Lake’s, condolences. 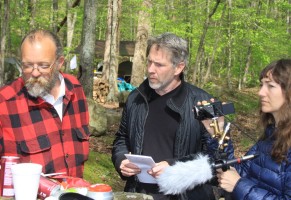 Jerry: For those who know little about the Barkley, can you share a little about this event and the incredible challenges faced by those runners who run this race?

Annika: Where to start?! The Barkley Marathons is an annual 100 mile non-stop ultramarathon that takes place in Frozen Head State Park in eastern Tennessee. It is so hard that, in its first 25 years, only 10 people had completed the five 20-mile loops in the 60 hour time limit. The trail changes each year, the course map is not released until the night before the race, there is no official start time – only a 12 hour window at which point you will have a one hour (conch shell) warning, only a map and compass are allowed, 10 books (from which a page must be torn on each loop) are placed along the course as proof that runners have followed the route, there are no aid stations – only 2 unmanned water drops, only about half the race is on a trail, sawbriars, exhaustion, and hallucinations abound.

The Barkley is less a competition between runners than it is a true test of an individual’s pain limits and willpower. It is person versus trail, and usually the trail wins. With that said, we were blown away by all of the runners this year, and could not believe the luck of witnessing a 3-person finish.

Jerry: Your documentary will memorialize the dark humor and unique qualities of a race unparalleled in the ultrarunning world. What message will this film share with its audience?

Annika: The Barkley was founded on dark humor! We don’t want to speak for him, but it seems Laz started this race as an outlet for people to push themselves to the absolute limits of human capabilities and, with that, come spectacular failures. We experienced the Barkley humor firsthand when Tim went to set a camera on the first day of the race and got lost for 16 hours!

At this point in the process it is hard to pinpoint one message in particular. But we hope to show what the Barkley exemplifies for people: an ultimate test of endurance and self reliance through mind and body. When else does one get that opportunity?

Jerry: Can you please tell us a bit about your background and experience in documentary film production?

Annika: We are freelance employees with a background in feature films, tv, and commercials. We started production with that experience, where there is a distinct plan for each day, and it has been liberating to work on a documentary where we have to adapt to anything that happens. We can’t lug as much gear around since we have to react on the fly, and the unexpected is always welcome.

The unique challenges of shooting the Barkley (besides the terrain, weather, etc.) coincide with those facing the runners. We had to track down Laz by carrier pigeon and physically and mentally prepare for all the unknowns: start time, route, and outcome. Our main goal while shooting was to maintain the integrity of the race for the participants; to capture what we could while being as unobtrusive as possible. Based on feedback, I think we achieved that.

Jerry: Personally, I’m very proud to be a “backer” of the Barkley Marathons documentary! I donated $50 about a month ago, to help the project move toward completion. Can you explain how the Kickstarter funding platform is helping to bring this documentary to life?

Annika: Thank you for being a Backer! We love the idea of Kickstarter, a crowd-sourced funding website, which allows people an opportunity to raise money for their creative endeavor. Anyone who is even slightly interested in a project can donate as little as $1 to show their support. If the project does not meet its funding goal, no money changes hands. This puts the pressure on us to get the word out on the project, but also puts it in the hands of the backers as to whether something is worth successfully funding.

Our funding goal will help pay for the race weekend shoot. We hired 6 local Tennessee crew and close to half the funds we raise will pay their wages. Support will also go towards the camera, sound, grip, and electric rentals, insurance, state park fees, and travel expenses. It was important to us to patronize local Tennessee businesses since the Barkley is based there, so our gear came from Memphis and Knoxville.

Jerry: Tim and Annika, thank you so much for your time. As an ultrarunner and passionate fan of ultramarathon, I am extremely excited to see this documentary come to life. Thank you and good luck in the editing room!

Annika: Thank you so much for supporting the documentary. The excitement that the ultra community has shown for the project has meant so much to us. This has been a life-changing experience and the fact that there are people interested in the final result keeps us motivated when the challenges become overwhelming.

We have until April 18th to meet our fundraising goal so if anyone is interested in seeing what we come up with, they can visit www.barkleymovie.com