After several years of competing in endurance sports, I found myself dealing with regular overuse injuries that often sidelined me from training. Those injuries included lower back problems, inflammation, patella tendonitis, plantar fasciitis, and issues with the IT band. With every one of those injury episodes, I suffered a bit of depression because it was not my choice to take the time off and it seemed every injury was poorly timed with respect to key races or developing fitness.

The great change in my training came with the introduction of regular yoga practice. It was my friend, Lorraine, who first suggested I visit her Bikram Yoga studio in San Diego. After some admirable persuasion on her part, I decided to join her for a 90 minute session in beginner’s yoga. My first few sessions were very intense, to say the least. I was challenged but also developed a profound interest in yoga as it related to my primary sports of ultrarunning and triathlon. Unfortunately, I didn’t continue practicing yoga and I slipped back into my former methods of running, biking, and swimming to extremes. It was several years later, after my move to Colorado, that I found myself injured again from ultrarunning.  A massage therapist was actively working on my IT band and during our discussion, she suggested I give yoga another try. Out of complete frustration for the injuries that continued to sideline me from mountain running, I researched a local Hot Yoga studio and walked into the lobby one day with an open mind. That was about 4 years ago. Since that day, I have made “hot method” yoga a regular part of my endurance training.  In that time, I have gained some real perspective with regard to why you should consider yoga as well.

I am grateful to have found yoga and made it a regular part of my busy life because it keeps me healthy in mind and body. Basically, yoga keeps me on the trail and ready to tackle mountain miles on a daily basis. There are several reasons I would suggest ultrarunners consider yoga:

First off, I have not had any overuse injuries since I began practicing yoga.  The nagging running injuries that sidelined me years ago like IT band tightness, lower back pain, and runner’s knee are just distant memories.  If I feel anything in my body that amounts to a possible running injury, I visit the studio and get my 90 minutes of practice.  On almost every occasion, the pain subsides within 24 hours of my session and I regain my regular training as if it never happened.

I’ve developed greater flexibility in my entire body. This is one of the physical benefits of regular yoga practice. This greater flexibility allows for more fluid trail running and allows me to feel smooth in my turnover. No doubt, it also helps alleviate other types of injuries one might suffer during rugged trail running. Realize that my knees, ankles, legs, hips, and back absorb the damage from ultra distance running because I undo that damage in the yoga studio. This has become quite obvious throughout the past few years when I include more yoga in response to the mileage increases or races during my season. I would also share that balance, core strength, and breathing are greatly improved through regular yoga practice.

I personally enjoy the stress reduction of a well timed yoga class. This helps me sleep better and clears my mind to write poignant articles for Trail and Ultrarunning (wink wink). One of the most successful professional basketball players of all time was Kareem Abdul-Jabbar. In fact, he is considered to be one of the best of all time. It was Kareem’s longevity in the sport that allowed him to obtain incredible records like playing 1,560 games (2nd most in NBA history) and career NBA all time records for most points, minutes played, all star games, and free throws. (1) Many don’t know that Kareem played all those years (1969-1989) and practiced regular yoga throughout. His career outlasted most by a decade!  Kareem once shared his thoughts about yoga saying, “As preventative medicine, it’s unequaled. Once I started practicing it, I had no muscle injuries during my career. Yoga can help any athlete with hip joints, muscles, tendons, and knees. Plus, it keeps you in touch with your body.” (2) 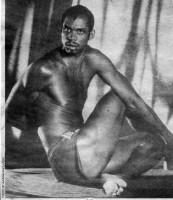 Lastly, for those of you who know little to nothing about yoga, I want to share a little about what yoga practice is like in the traditional “hot method” or “Bikram Yoga” style. I know it was a complete unknown when I first walked into the studio. Sometimes it is just the unknown that keeps people away. Let me share a little about what happens during my typical 90 minute practice… My local studio here in Westminster Colorado is called “Hot Method Yoga”. The studio provides a schedule which I access online. They have a variety of classes to include the standard beginner class as well as more advanced yoga classes. They allow walk-ins or you can schedule ahead. The standard “beginner” practice is designed to be standardized, so every class is presented pretty much the same way. Classes begin precisely on time when the instructor enters the room. Every student has a yoga mat and towel. The instructor then talks students through a series of breathing exercises which include postures in “standing position”.  The movement of arms and elbows increase lung capacity, which is beneficial for many reasons. 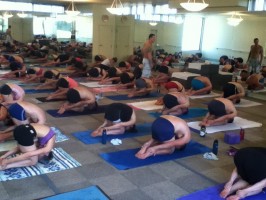 The first 20 minutes are considered a warm up and several more postures are introduced. Each posture brings students to a static position for 10 seconds to 1 minute. There is an effort to maintain stillness in most postures. The only sound in the room is often breathing. From there, we move to the floor where we do a series of standardized postures on our mats. From the toes to the head, every part of the body is warmed up and gradually introduced to deeper postures. New students are always welcome to stop and lie down if they are overwhelmed for any reason. The only thing asked of new students is that they remain in the room so the instructor can make sure they are OK. Between floor postures, students may lie in savasana or “dead body pose” which is basically complete stillness. This allows the body to recover and absorb. The length of time spent in savasana is dependent on the type of posture completed. Toward the end of the 26 postures, a series of floor postures provide excellent opportunity for you to stretch your IT band, especially with my favorite “spine twist”. This posture is one of the last in the series, but works for me as well as a week off from running with regard to recovery from IT issues. Other problem areas for runners are targeted as well, including hamstrings, knees, lower back, and calves. In truth, you will be undoing a ton of damage by practicing yoga in cooperation with your distance running. In a glimpse, I’ve share a little about what happens during a 90 minute session in the studio I attend. One of the reasons enjoy the class is because I know exactly what will take place.  There are other yoga studios that modify traditional yoga and eliminate the heated room, add music, or modify postures in other ways. It is my personal preference to practice the traditional form of yoga but that is not to say that these other methods would not be beneficial to you as well. 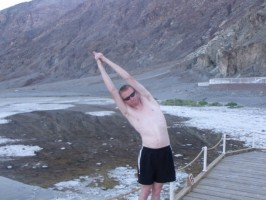 Your author at Badwater performing one of the first postures in the beginner series.

If you find yourself struggling with overuse injuries, I urge you to consider yoga. Even if you are free from overuse injuries, you will see benefit from yoga in other ways.  I say this having been down that road before.  With an open mind and the right yoga studio, I believe you will quickly find a great balance for your training that will keep you more balanced in body and mind.

» Coaching, Journey To A First Ultra, Trails, Training » Yoga for Runners: A Hot Look at Yoga

7 Responses to Yoga for Runners: A Hot Look at Yoga