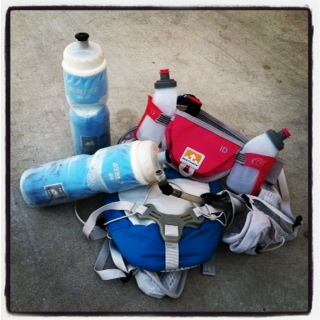 Fluid and electrolyte balance are critical to maintaining normal body function. One of the most hotly contested issues in endurance sports is what — and how much — athletes should drink. While the human body loses both water and electrolytes (a fancy word for salts) during exercise, there’s been considerable debate about replacement strategy. Some claim that an athlete should attempt to replace all lost water and salt during an event, while others suggest that this is unnecessary, ineffective, or even dangerous.

A recent study in the British Journal of Sports Medicine [1] found that many runners had false, scientifically unfounded beliefs about hydration. These runners drank according to a schedule and/or tried to drink “as much as possible” during running events, which greatly increased the risk of exercise-associated hyponatremia (EAH). EAH is a potentially life-threatening condition that results from excessive water consumption, coupled with electrolyte loss. Symptoms are similar to extreme dehydration, and can include nausea, vomiting, cramps, coma, and death. The study authors suggested that many of the mistaken beliefs persisting in the running community about hydration stem from advertising by sports drink companies, who (in order to sell more product) prompt athletes to drink, drink, and drink some more. Advertisements of sports drinks claim that they both hydrate and replace electrolytes. While this is true to some degree, as sports drinks do contain salts, all sports drinks are hypotonic to the blood. This means that they contain a lower percentage of salts than those naturally found in body fluids. As such, excessive consumption of sports drinks can increase the risk of EAH, just as excessive consumption of water can do [2].

Very savvy endurance athletes may attempt to replace just exactly the amount of fluid lost during exercise — and no more — by calculating sweat rate and hydrating accordingly. While this strategy is less likely to result in EAH than drinking as much as possible or according to a schedule, it nevertheless increases the risk of overhydration and EAH because of the hypotonic nature of sports drinks. Further, sweat rate is calculated by comparing pre- and post-exercise body mass, where the lost mass is taken to be water lost through sweat. However, loss of body mass during exercise occurs through several other mechanisms. These include respiration (the carbon dioxide exhaled weighs more than the oxygen inhaled) and respiratory water loss [3].

Researchers have found that athletes who drink to thirst replace about 70% of lost water [4] while exercising. These individuals become slightly dehydrated during the course of an endurance event, but can rehydrate fully upon event completion. Drinking to thirst is considered the safest strategy for avoiding both excessive dehydration and EAH [5].

As to whether partial dehydration (loss of water totaling more than about 2% of body weight) impairs performance, there’s heated debate in the scientific community. Some researchers feel the evidence suggests that performance degrades significantly with dehydration, while others maintain that degradation of performance is associated with discomfort (due to thirst) rather than physiological issues (dehydration). The latter group suggests that if athletes drink to thirst, they will remain comfortable — and continue to perform well — despite gradual and partial dehydration [6]. Interestingly enough, in a study of male ultraendurance athletes, finish time was strongly and negatively associated with fluid intake among both ultracyclists and ultrarunners [7], meaning that those who drank less finished faster. Of course, there are several confounding factors here, so the findings can’t be taken unequivocally to mean drinking less will make you finish faster. Faster athletes are on the course a shorter period of time, giving them less opportunity to drink. Further, faster athletes may be better conditioned, which could affect fluid loss rate. Nevertheless, the results of the study are intriguing, and at the very least suggest that maintenance of full hydration during an event is unnecessary.

While there are certainly researchers who hold opposing stances, the consensus among exercise physiologists is that drinking to thirst is the safest way to avoid both excessive fluid loss and excessive fluid intake [8]. Further, electrolyte-containing beverages reduce the risk of EAH relative to water alone, but still contribute to EAH when used in excess of the demands of thirst.