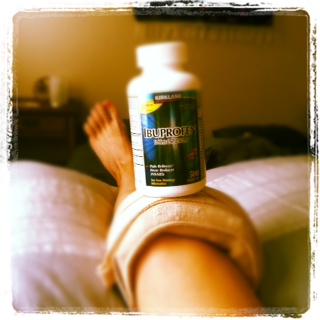 I’ve been doing some barefoot running lately, because I’ve been somewhat convinced by small amounts of research (and lots of anecdotal evidence) that suggest it may help to improve form, increase efficiency of stride, and reduce impact load due to heel-striking. Technically, I haven’t been barefoot; I’ve been running in ultra-minimalist shoes (that I will leave unnamed because I don’t think they caused any more of a problem than any other minimalist footwear would have).

I worked up very slowly, never running more than a couple miles a week in the shoes, and always making sure to stretch and massage afterward. During my heaviest “barefoot volume” week, I ran 2 barefoot miles out of 35 miles total. The barefoot running definitely helped with my posture, I felt much lighter on my feet, and I enjoyed the experience. My calves hurt for a day or two afterward, but it was never anything completely intolerable.

About four days ago, I noticed a large lump behind my left knee. The lump didn’t hurt, but it felt like a golf ball-sized water balloon. My knee felt sort of overinflated, and full of fluid. I went to see the orthopedic surgeon yesterday (the same one I’ve been seeing about my SLAP tear; I’m thinking of declaring him my primary care physician!) After examination and x-rays, I was told I had a HUGE Baker’s cyst. This is basically an overproduction of synovial fluid (the jelly-like fluid that lubricates the joints), resulting in the formation of a fluid-filled cyst behind the knee. Generally, these cysts are the result of inflammation of the knee joint.

Bottom line, said the orthopedic surgeon, it was probably the barefoot running that did it. I’ve been a runner for too long to get a Baker’s cyst out of nowhere, he said. Barefoot running is, in theory, great for form. However, it’s REALLY hard on the calves. It can cause irritation at the origin of the calf muscles up behind the knee, which can lead to the inflammation that results in the cyst.

Most cysts like this are relatively benign; it’s a RICE injury…so I’m done with running until after I recover from my shoulder surgery. Because my cyst is so big, it apparently has a pretty good chance of rupturing, which results in lots of pain and swelling for a few weeks. Hopefully with lots of ice and ibuprofen, I can avoid that scenario.

I haven’t decided whether I will give barefoot running another shot once I’m back in the game. I wonder whether it would be better to just focus on form mentally rather than relying upon the physical sensation of barefoot running to force the strike adjustment to take place.

I’m interested to hear what sorts of experiences other runners have had with minimalist footwear.