So you want to Run a Faster Ultra Marathon? Back to Basics

Simple, if you run faster you’ll run a faster ultra.  You’re thinking, that was a waste of click…BUT wait!

Seriously, in the ultra marathon world we focus a lot on distance…duh…but we often forget about speed and what it does for you. Now, I know a lot of us are simply trying to survive the race – me included – but the benefit of speed can really help you have a better, if not faster, race.

First lets talk about power. More power means less effort than before…running seems easier. Which ultra marathoner wouldn’t want this? And 10% less effort has more of an exponential feel to it. Strength means a lot in any distance of running.

Second, turnover. If you’re running uphill the resistance will overwhelm your power muscles if you try to maintain pace via stride length. But with shorter, faster steps you can replace power with turnover and still move up the hill without burning out. Studies have shown the magic number of strides per minute to be 180. This applies to just about any distance, from 5k to the marathon, to ultras as well. Exaggerate the process and imagine doing lunges up a hill vs taking really fast baby steps. You likely won’t make it a 100 yards doing lunges up a steep trail but you’ll go faster and longer with the quick baby steps.

If you combine power and turnover by training faster you’re threshold until exhaustion during long efforts, like ultras, will also increase. 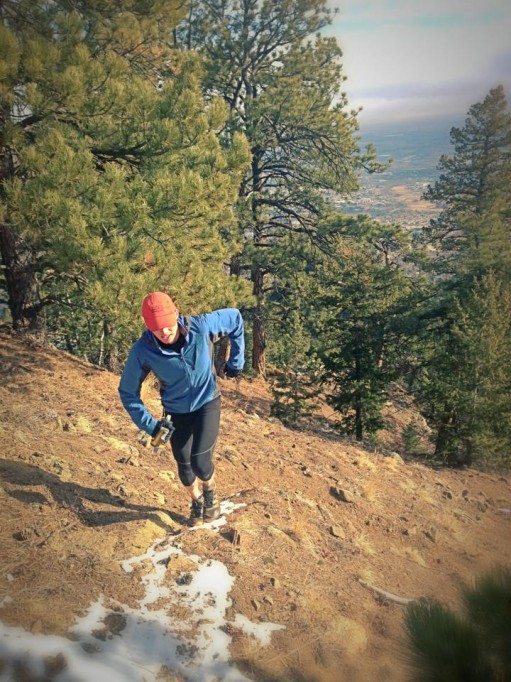 The other concepts of running faster bundle in lactic acid threshold, VO2 Max and you’re body’s overall response running faster. By training faster your lactate acid threshold, VO2 Max and other mechanisms all improve.  And while lactate acid threshold and VO2 Max come into play less in ultra, they still play a role.  For example, by being in better condition, your body utilizes fat as energy at a much higher rate than before. Having more energy staves off fatigue. Think about someone who’s not in good shape and put them on the same trail as someone who is. Going the same pace, who goes longer?

The last factor is running form and economy. Running faster tends to make you have a more efficient running form. Running slow allows you slump and be messy. This ‘messiness’ ends up either hurting you or wasting energy; two things not ultra runner wants.

While there are certainly many other factors to consider – time on your feet, hardening into the sport, racing smart and providing eating and drinking enough during an event (I know I’ve been beat by “slower” people because I didn’t race right) – being faster and more powerful will give you that extra edge to making your ultra experience so much better.

Don’t forget to be fast!

» Training » So you want to Run a Faster Ultra Marathon? Back to Basics

4 Responses to So you want to Run a Faster Ultra Marathon? Back to Basics